Today’s Pittsburgh Pirates Card of the Day comes from the 1991 Swell Baseball Greats set and it’s the third appearance for Pirates catcher (1967, 1969-76, 1978-80) Manny Sanguillen, who is celebrating his 78th birthday today. We featured his 1968 Topps rookie card here in June of 2020, and then his 1976 Kellogg’s card was used here one year ago today. For his third card, we go to a set that hasn’t been featured here yet. Swell was produced by the Philadelphia Chewing Gum Corporation out of Havertown, Pa. The had a few sets during this era and Sanguillen appeared in the 1989-91 sets. It goes by the name Swell Baseball Greats, though the packaging also has All Time Legends under that name. As you will see by the front of the card, there’s a reason it is commonly referred to as the Baseball Greats set.

This is was very interesting in that they came in packs of ten cards and 36 packs to a box. Many people buy whole boxes at one time, mostly due to a savings over buying individual packs. If the packs were 50 cents each back then, you may have got a box for $16 instead of $18. Anyway, the set consisted of 150 cards, so by buying a full box, you were getting 360 cards total, with a good chance of completing an entire set at one shot. I never bought these, but even though the math says it is possible, it seems highly unlikely that you could get two full sets out of one box. If that was possible, people would stop buying packs after about $10 spent, which isn’t a great marketing plan for an off-brand set. 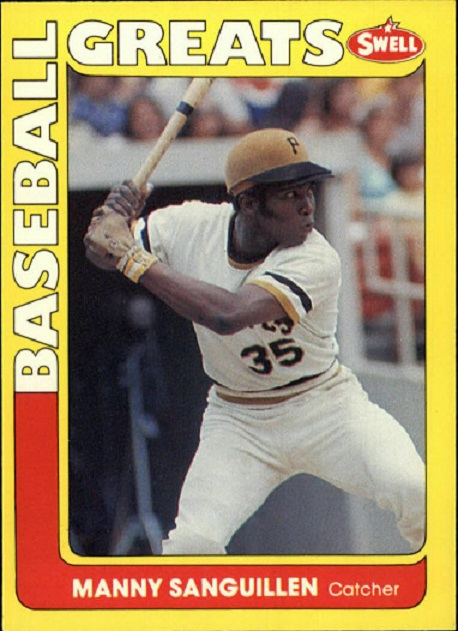 You can see right away why this set gets labeled as the Baseball Greats set, while most people don’t mention the All Time Greats part of the name. The front design here has a real 1970s feel to it with the colors/lettering combo, which goes great with the outstanding photo of Sanguillen at the plate. He has that familiar smile on many of his cards produced during his playing days, but he’s all business here. As you may have guessed, all of the players in this set were retired at the time. Most of the players saw time in the majors during the 1960s, but there were a few who just retired prior to the set coming out, as well as a handful of players like Babe Ruth, Rogers Hornsby, Cy Young, Walter Johnson and Honus Wagner. 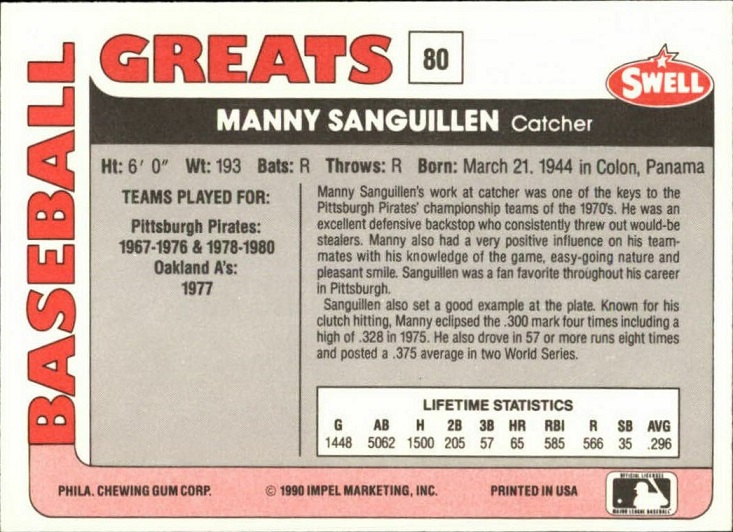 The back has a nice little bio section on Sanguillen and a somewhat abbreviated set of stats, showing just his lifetime numbers in ten categories. Back then cards usually had either 12 categories of stats on offense, with walks and strikeouts included, or 13 categories, with slugging also included with the walks and strikeouts. The back here mentions Sanguillen’s strong defense, as well being a good teammate, and they also mention the familiar smile. They note the years that he played for the Pirates, which is slightly different than how I wrote it out up top. He didn’t play in the majors in 1968, so it shouldn’t be up there.

I’m not a huge fan of the front or back designs here, lots of wasted space on the left side of the back and only lifetime stats. However, I really like the photo that they used for Sanguillen, so I like the card a little more than the average card from the set.

If you would like to purchase this card, there’s a site called Ebay, where if you search “1991 Swell Sanguillen”, you can find six examples of this card, with the cheapest one being $1.98, while the others all have slightly higher shipping costs. However, check the bottom of the back scan for this card above. It has a 1990 copyright date, which throws people off. This card is from the 1991 set and Sanguillen has a different card in the 1990 set. If you just search “Swell Sanguillen”, more examples of this card will pop up, including numerous autograph copies in the $15-$20 range. One person has 18 of the cards (no autographs) in one lot and they want just over $6 delivered! You can get that lot and share one each with your six closest friends, but keep 12 for yourself.