Walter Schmidt just might be the most obscure Pittsburgh Pirates player who spent at least nine years with the team. There’s a trio of things working against him. The main one would be that his last season with the team happened 98 years ago. That’s always going to hurt someone unless they went to the Hall of Fame, or set the team record for wins (please tell me you know about Wilbur Cooper). The second thing that hurts Schmidt is that he didn’t play for any World Series teams. The Pirates went 16 years between their first and second World Series title and he played in nine of those 15 seasons. The third thing keeping him obscure is that he was just a solid role player, usually serving a platoon role with another catcher. He cracked the century mark in games played twice, and he put 5.8 WAR total during his time in Pittsburgh. Old-time role player with no memorable teams, unless you count the 1917 club that is only somewhat memorable because of how bad they played. That’s a lot going against him, but hopefully this article and the bio from today’s This Date in Pittsburgh Pirates History article helps him out.

Schmidt’s best season with the Pirates was 1918, a season known for ending early due to the war, and the Boston Red Sox winning the World Series for a fifth time before their title drought that went so long that almost all of you remember it ending. He put up 2.0 WAR that season, the sixth best mark on the club. Schmidt didn’t have a ton of cards during his time with the Pirates and some are very rare, so there weren’t a lot of choices for his first appearance in this series. Basically, he won’t be a regular here in the future. His first appearance in this series comes from a strip card set put out in 1923, which was given the designation of W572. 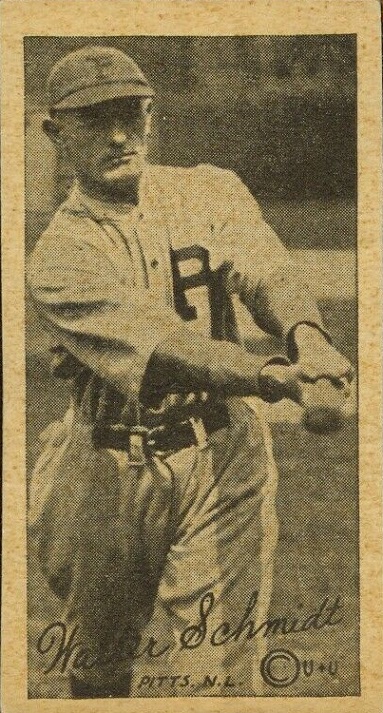 Strip cards were made for mass production so some of the production value went out the window to keep the cost of the cards down. They literally came out in strips and it was up to the recipients of the card strips to cut them into individual cards. Many times it was younger kids performing the card surgery and they did an awful job, so some of these cards aren’t able to be graded. Sometimes they left enough border that the cards could be cut again at a much later date by someone who knew what they were doing, which helped the grade of the card. As long as the card meets the minimum size requirement, then trimming at a later date was/is acceptable. That is obviously a no-no with cards that came cut from the factory.

With a little uniform history knowledge, this photo of Schmidt swinging for the camera is easy to date. That is a one-year uniform style used in 1921. In his first five seasons (1916-20), the Pirates had a pocket on the front and a smaller “P” on the left chest. In 1922, they used an old English style “P” on the jersey, which was also a one-year style. The next year the “P” went to the left sleeve. The photos on the 121 cards in this set were not the best quality and that aged look the card has above is basically original coloring. Some of the facsimile autographs on the cards are a bit harder to read due to the photo quality and dark print.

If you’re interested in this card, there is one option up on Ebay right now that is an interesting case, where the seller is away not and you can’t purchase the card until March 24th (unless they come back sooner), but you can put it in your Ebay cart. It’s graded as a PSA 5.5 and the asking price is $200. PSA actually got the label wrong on the card, calling it a W573, but that doesn’t affect the grade and I believe (don’t quote me on it) that they will reholder it for free to get the label correct. They would much rather prefer that the error not be out there in the card universe for all to see. That price seems close to reasonable based on the other listings of similar common players in/around that grade. There’s also a low grade/ungraded copy going for $35, which might be more appealing to collectors.

John Dreker
Here’s another case of me tricking myself due to choice of scans for a player. I needed a photo of…