I was recently reminded about Today’s Card of the Day selection on Twitter and saved the scan for future use. Today’s a good day for that future use, as it would have been the 41st birthday of Pittsburgh Pirates second baseman Jose Castillo, who had his life taken away tragically while playing winter ball in Venezuela in December of 2018. We celebrate him here today, along with another former Pirates player from that era, Jose Bautista. This card is a 2008 Topps Jose Bautista, featuring Jose Castillo as his stand-in. 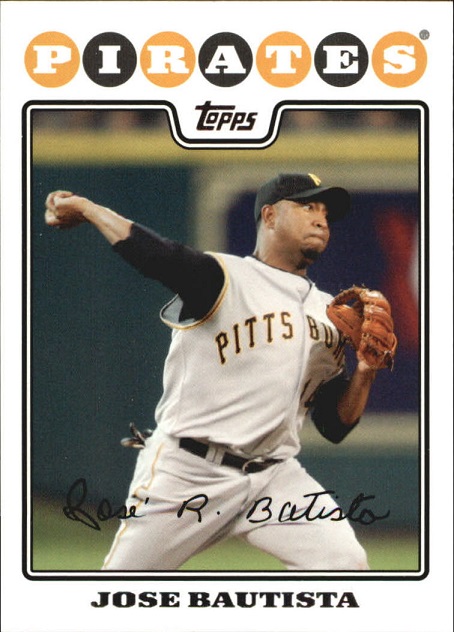 You are probably looking at that card and wondering what is going on. Clearly that isn’t Jose Bautista on the card, even though it says it is him. If you were following the team then, you would recognize that as the aforementioned Jose Castillo. They don’t look alike, so I’m guessing the same first name threw someone off at Topps. Between them they played almost all of the innings at third base for the 2007 Pirates. While that wasn’t Castillo’s main position, he was there often enough that year to put third base on his resume.

In my opinion, this 2008 Topps design had a real simple feel to it like one of their cheaper sets for the budget collectors. Sometimes that can work. I don’t hate it or anything, but they don’t stand out at all. I’d probably rate it a four on a 1-10 scale. 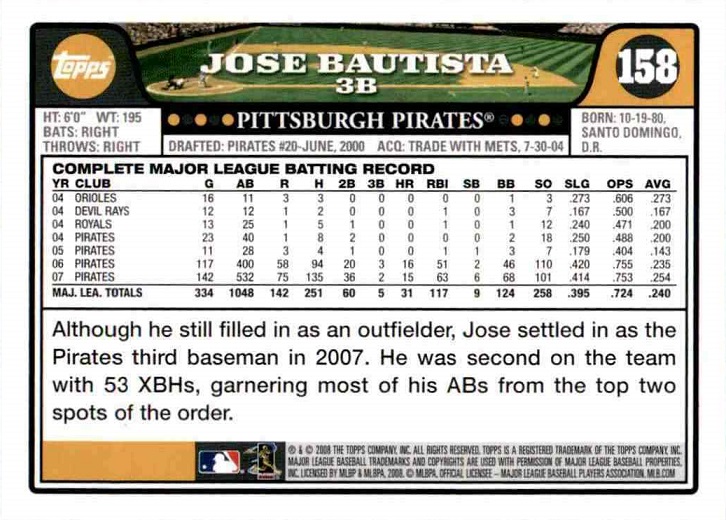 It would have been funny if they included Castillo’s stats on the back as well, but those belong to Bautista. You might noticed that it says the Pirates acquired him in a trade with the New York Mets on July 30, 2004, but he has no stats for the Mets that year. That wouldn’t necessarily stand out without knowing that he was a Rule 5 pick at the time. You may have just thought that he was in the minors with the Mets at the time. However, New York acquired him earlier that day on July 30th from the Kansas City Royals, then traded him back to the Pirates in the Kris Benson deal, returning to where he was in the first place.

The Pirates didn’t protect Bautista that 2003-04 off-season for good reason, he was a mediocre player at High-A for half of the 2003 season. He really wasn’t Major League ready until a little while into the 2006 season, and then he eventually broke out at the end of 2009 when hitting coach Dwayne Murphy suggested a change with his batting stance that was more of a “what can you lose?” moment, but it turned things around for his career. He went from being in great danger of getting designated for assignment, to soon signing a huge free agent deal to stay in Toronto. He had a great seven-year peak, putting up 38.0 WAR in 2009-15, while posting -1.3 WAR in his other eight years combined. That 38 WAR in seven years is Hall of Fame territory production, though it can’t be surrounded by below replacement level play for a longer period of time and still get you to Cooperstown, so he will have a hard time reaching 5% of the votes in his first year on the ballot. For reference, Jake Peavy and Carl Crawford just got zero votes in the last ballot with better career WAR totals.

Back to the back, and I like the design here a lot more than the front. That baseball scene at the top looks great. The clean black and white look from the front works much better on the back when you’re trying to read stats and little bio notes about the player. The back here is more like a seven on the 1-10 scale.

If you’re interested in this card, you’ll be happy to know that it’s a common. Since Bautista came up well short of Cooperstown numbers, he now falls into the semi-star category. In his peak years, this card would have been worth more, but there are plenty of options on Ebay that will go for under $2 delivered. If Topps corrected the error mid-print, then both versions would have a little added value, depending on the print runs of each card. There is another option for this card that might be more appealing. They have gold versions that were numbered to 2,008 copies. You can get one of those for $4, with the only reason it’s higher priced is no one has reasonable shipping for the card.