As recently mentioned here, we are over two years into our series of almost daily Card of the Day articles. I thought by this point I had all of the major sets from the 1980s covered already, but to my surprise, I could not find a 1989 Fleer article. This is the first time here for Brian Fisher, who turns 60 years old today. He spent the 1988-90 seasons with the Pittsburgh Pirates before multiple injuries and surgeries derailed his career. He came to the Pirates in the trade that sent Rick Rhoden to the New York Yankees and brought Doug Drabek to Pittsburgh.

I was just trying to find a set to use today that hasn’t been featured here in at least a year. Fisher was with the Pirates long enough to have 10+ options for today’s article, but I didn’t expect to find a set that hasn’t been used yet from that group. Yet here we are, taking our first look at the 1989 Fleer set today. Here’s card number #209 from the set, featuring Pirates pitcher Brian Fisher. 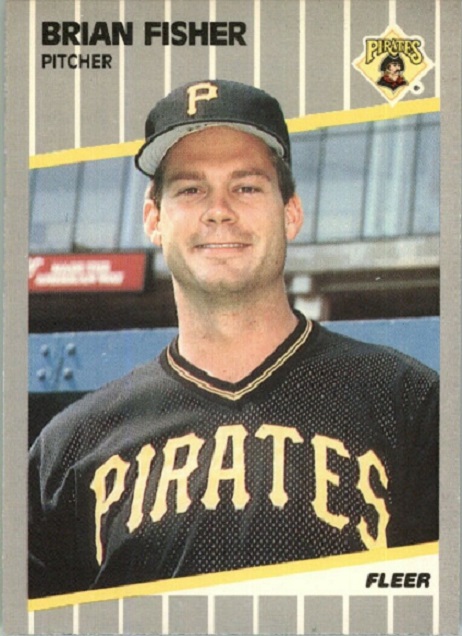 The 1989 Fleer set had an interesting design. I’ve noticed that I’m partial to gray borders on cards, with multiple examples I can think of where I really like the look of the set. I also like two other things used here. The yellow/gold borders at the top and bottom of the photo works well because they used team colors here. Not every team has those colors. Obviously I like the Pirates logo from that era, and I assume everyone else does too. I’m not sure about the white pinstripes and the angle cut of the photo, plus the white area at the bottom for the Fleer name is much bigger than the spaced needed for the name. I’d probably give the front design three out of five stars. You don’t get a lot of photos of guys staring directly into the camera. Usually they’re looking off to the side in these types of photos, so that’s an interesting choice, but the Pirates uniforms always make the picture better…okay, not all of them do that, but a large majority. 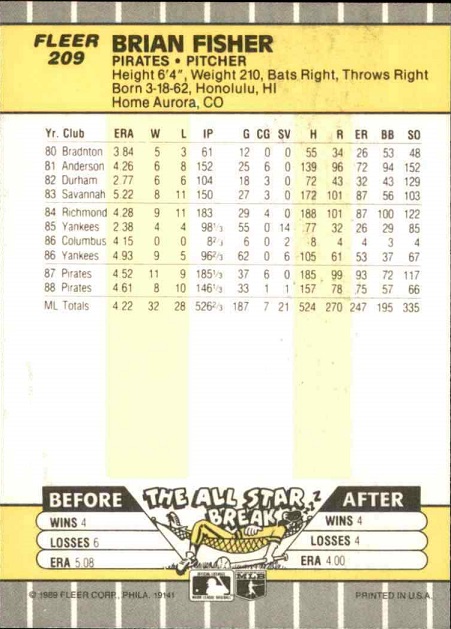 The back here isn’t using yellow just because it’s the Pirates, that was the same for all cards in the set. I like that they included all of his stats going back to 1980, except they really didn’t. For some odd reason, they left off his 1986 Triple-A stats. That open space there would have been good for some bio info because that’s a big area with nothing. The before and after the All-Star break splits are something new for this set, as Fleer was trying out things at this time. The 1988 set had home/road and day/night splits down there. The 1990 set listed the walk ratio, strikeout ratio and opponent’s batting average for each pitcher.

There is nothing of note here with this card as far as the price section. There are plenty of sellers who have this card for under $2 delivered, just watch the shipping charges from some sellers who list them for 99 cents with $3.50 shipping (that goes for all common cards). There’s a Glossy version that looks the same on front, but has a blue back. They are harder to find, but there’s very little added value, so if you prefer that one, get it for about the same price. I only found one autographed copy and it sold in January for $7 total.