Today’s Pittsburgh Pirates Card of the Day subject had to be John Smiley, left-handed pitcher for the 1986-91 Pirates. That’s because it’s not only his 57th birthday today, it’s also the 30th anniversary of the date he was traded to the Minnesota Twins. Smiley was a solid pitcher during his six seasons with the Pirates, but he is best known for the 1991 season when he won 20 games, made the All-Star team and finished third in the Cy Young voting. That year was the last 20-win season for the Pirates, and with the way modern pitchers are pampered, we might not see another one any time soon. There have been six seasons since then that haven’t had any 20-game winners in baseball. Falling short of that mark is likely to happen more often in the future, so Smiley could be the trivia answer to a question for quite some time.

Smiley has appeared in this series once before, looking at his 1990 Leaf card. That was the first time we used that set, and so far it’s the only card from that set used here (nothing personal, 1990 Leaf fans). As you may have guessed, that article was posted a year ago today. Today’s Card of the Day has to do with another anniversary, and an interesting decision by Topps made 25 years apart. Here’s another first time set being used for Smiley, as we look at the 2017 Topps Archives Fan Favorites set, going with the John Smiley autographed card. 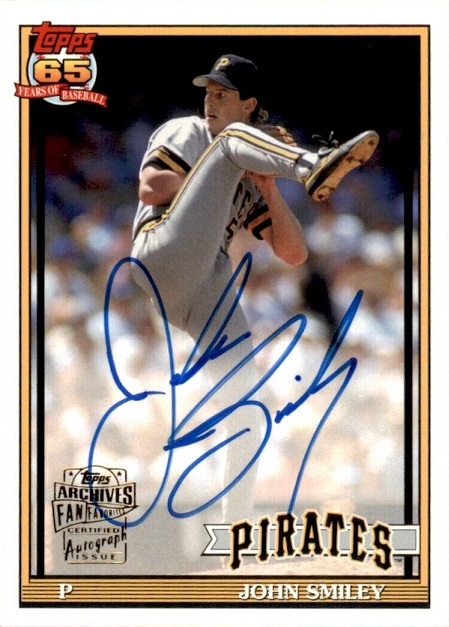 I mentioned that there was an interesting anniversary choice here. This card design is from the 1991 Topps set. That year, Topps celebrated 40 years of baseball with a logo identical to the design you see in the top left corner here, with a different number obviously. I’m not one to do math at people, but I will say that the 2017 Topps Archives Fan Favorites set came out 26 years after the 1991 Topps set, yet that clearly says 65 years of baseball (40+26 does not equal 65). I can guess one of two things here, with the second one seeming more likely. Either the people at Topps in 1991 forgot that they put out a 1951 set, or they were celebrating the 40th anniversary of sets that year. Either way it works, so I’m guessing it was an anniversary, even though their own wording of “40 years of baseball” suggests otherwise. However, I don’t know how they got to 65 years in 2017. Even if they were using an anniversary, they were off by one year, but it was also their 67th year of printing sets. Yet here we are wondering what they were thinking…

Back to the important thing, and that’s a great set that features previously unused photos of players from the Topps vault, putting them on older designs, with the upgraded printing process of 2017. The original 1991 Topps Smiley card was a closer photo, shown just as he was releasing a pitch, while wearing a home uniform. Even though both photos show his delivery, they are quite different pictures. The Pirates team name you see there has been a bit updated over the 1991 version, but it’s still the same style and same color pattern used for 1991 Pirates cards. I like how Topps clouded the photo a bit at the bottom for Smiley’s autograph, which is much nicer that 93.1% (I checked) current players. 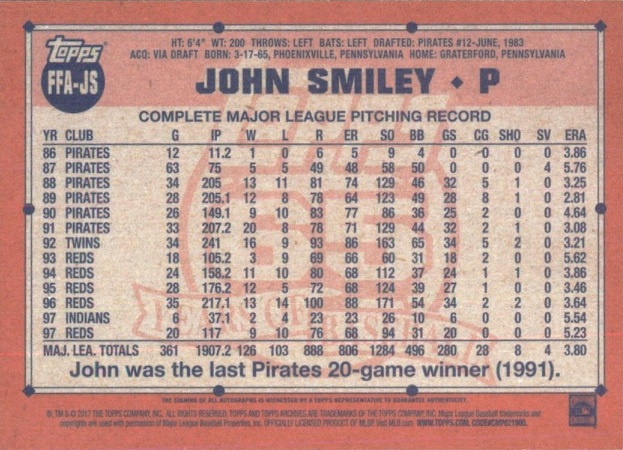 This back design here is basically the same as the 1991 Topps set. We recently had a Fan Favorites card of Kent Tekulve posted here and I noted that the back threw me off. They used a 1984 design, so my guess was that they would use his entire career stats because it was a 2003 card, or they would go up to the 1983 stats because it was a 1984 design being used. They did neither, and used just his Pirates career stats. So to my surprise when I checked out the back scan here, they didn’t use just his Pirates stats, they went with the full career. In the background of the stats, you can see the 65 years of baseball logo. It’s still wrong, no matter how many times they use it.

If you’re interested in this card, you have more than one option on Ebay. You can get the exact one you see above for about $12 delivered, with many sellers within $2 of that price (above and below). There are also limited numbered versions available, including one with a light blue border that limited to 75 copies, and it can be had for under $12 delivered. There’s a red border that is limited to just 25 copies and it’s going for $22. Finally, someone has a peach colored border, with 150 copies and it is $28.50. I don’t think I have to tell you that the prices should go higher when they are tougher to find, so that last price is very high.