Today’s Card of the Day subject seemed like a toss-up between Mike Easler and Phil Garner, two members of the 1979 Pittsburgh Pirates, who were both key contributors during their time in Pittsburgh. The Pirates made trades the acquire both players on this date, with Garner arriving in 1977 and Easler rejoining the Pirates in 1979. When I tried to decide which player to feature, I realized that both of them have been here multiple times, including four articles for Easler. With that in mind, I decided to feature a former player born on March 15th instead. This date is also the two-year anniversary of the first article in this series, which is now well over 500 articles deep. You can check them all out here.

Today’s article features Nellie King, who some of you might know as a pitcher for the 1954-57 Pirates, but more people probably remember him for his nine seasons of broadcasting for the Pirates, taking over the job ten years after his final game for the team. Today we feature a card that has a photo from his playing days, but it was put out in 1979 by a card company named TCMA, which is better know for their minor league cards. They weren’t allowed to make sets with active players, so they put out one with former star players and semi-stars from King’s time period. 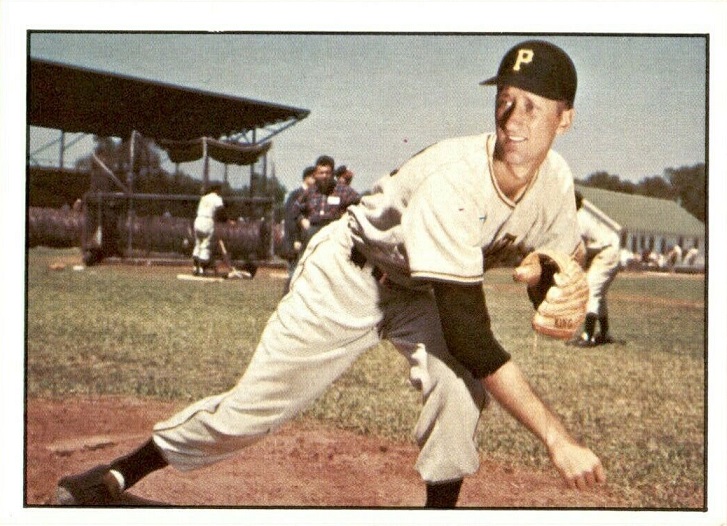 You have to love the old staged photo of King, from back when the Pirates used to wear batting helmets full-time, at the plate and in the field. I assume this is from Spring Training somewhere, since there is a house in foul territory down the left field line. I couldn’t imagine the replacement window costs of that place sitting right there. I love the photobomb from some random guy in a striped shirt just over his back. I’m guessing that was a media member, who happened to be staring at the cameraman taking King’s photo. The whole scene here is just great looking, and really screams 1950’s era baseball. 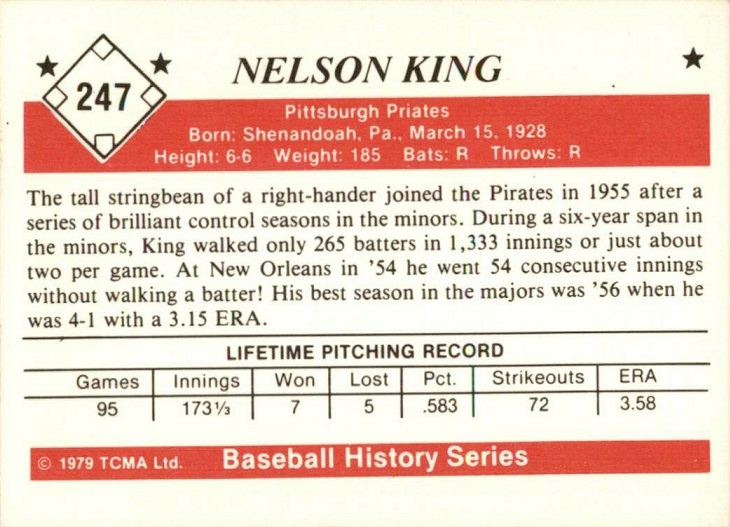 Usually when you see a card that looks tilted in a scan, it’s because I couldn’t find a good scan of the card and I didn’t take the time to edit it. However, there’s nothing wrong with the scan here, the back info just ended up askew on the card during the printing. This card has an error on the back besides the printing mishap, saying that King joined the Pirates in 1955. He actually debuted in 1954. They were definitely right about his control being brilliant, as he did a good job of limiting walks throughout his career. His big league time was all too brief due to a arm injury that caused him to call it quits at 29 years old.

If you’re interested in this card, you’ll be happy to know that there are multiple options on Ebay for under $3 delivered. King, who passed away in 2010, was a generous signer throughout his life, so you can find numerous autographed copies for sale. In fact, the only two closed auctions for this card in the last three months are both signed copies. One ended for $7 delivered, while the other had an $8.50 asking price, but the seller took a lower offer. None of the active signed auctions are that cheap, but one is $13, with a best offer, so maybe you can get close to that price range. King has a great autograph, unlike 90% of current players.