Topps made a splash in 2002 with their 206 set, which was a tribute to the iconic T206 set that was over 90 years old at the time. In 2003, Topps came back with another tribute to a classic vintage set, using the design of the 1911 T205 Gold Border set to create their own 205 set. While the original T205 set isn’t as popular as the T206 set, partially due to the smaller size of the set and player selection, the set is still quite popular with the vintage crowd today. There are plenty of collectors who go looking for all of the cards in the set, as well as hunting down different backs on those cards (more on this below).

One of the cards included in the set was a Kenny Lofton card that featured a piece of a game used bat. What is interesting about the Lofton card is that it shows him with the Pittsburgh Pirates on the game used card, but his regular card in the 205 set has him with the Chicago Cubs. His time with the Pirates was too short, signing with the club in early March, and he was gone in the horrible Aramis Ramirez trade by the end of July. The timing of his signing and trade kept him from appearing in a Pirates uniform in many sets, but this is a great offering from Topps. He was also included in the Upper Deck 40-Man Roster set, which we covered here exactly one year ago. That one-year anniversary timing was no coincidence. He’s featured today because it’s the date that the Pirates agreed to a contract with him exactly 19 years ago. 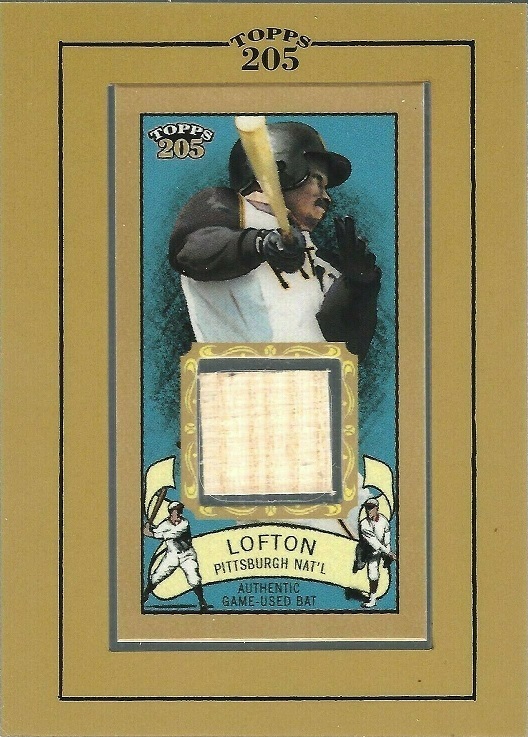 I really love what Topps did here. The actual card itself is just the middle section. The rest of it is a special T205 holder for the set, and only some cards in the set came in that holder, such as game used relic cards. I also love the look of the card itself. I collect old cards and really never got into the T205 set because I’m not big on portrait cards of players, and the T205 set includes almost all large portraits (artwork, not real photos) of the players, except for their small minor league subset, which I do have a few of because those cards look great. Other than that, I only have a few T205 cards, including Dots Miller. That being said, the action photo here, combined with the throwback design of the T205 set, along with the game used bat piece, makes this a terrific card. Even the Topps 205 logo is nice, and I rarely compliment brand logos (Fleer Ultra is an exception). 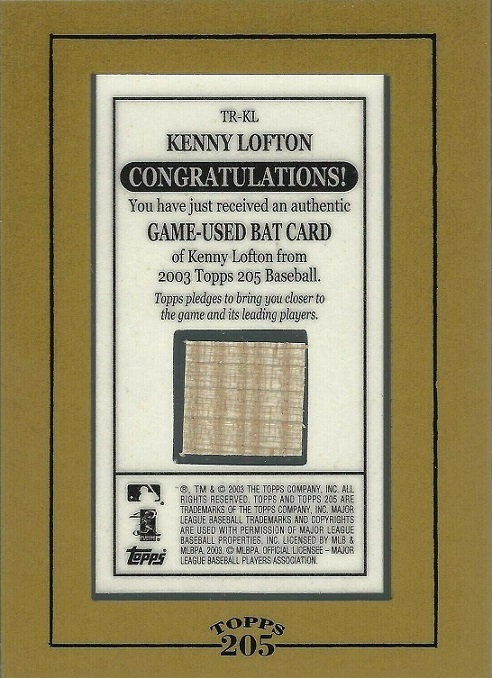 Well, after that great front, the back is a letdown. It’s a lot of legal stuff and a congratulations that tells you what you received. One thing you don’t usually get with game used bat piece cards is the rear view of the piece, so that’s something different from the norm here. A real T205 back had a small bios, a few stats and a tobacco brand ad, which could affect the value, depending on which brand ad your card has on the back. That brand/value combo is a thing on the regular base cards in the set, but not the game used cards.

If you’re interested in this card, there are actually a few (eight) options on Ebay right now. They range in price from $7 delivered, up to $17 delivered, though the latter has a make offer option. There’s really nothing different about them, so it’s best to go cheaper as long as the scans and seller check out. If you search “Kenny Lofton 205” you will see that his other three cards in the set all feature him with the Cubs, including a game used jersey card.