The title of this article is probably a little confusing if you don’t collect older cards. There is a very rare set that was produced in 1933 consisting of 32 cards and it is referred to as the George C Miller set, because his name is listed on the back of each card. There were 16 big league teams at the time, and each team had two players in this set. The Pittsburgh Pirates were represented by Paul Waner and Lloyd Waner. I thought about putting both of their cards in this article, but I think this set deserves to be looked at more than once. That’s due to how rare these cards are, as well as the condition sensitive nature of this set (see pricing section), and how both of those things affect the price. So for now, we look at the card of the man known as Big Poison, one of the Pirates all-time stars, Paul Waner. 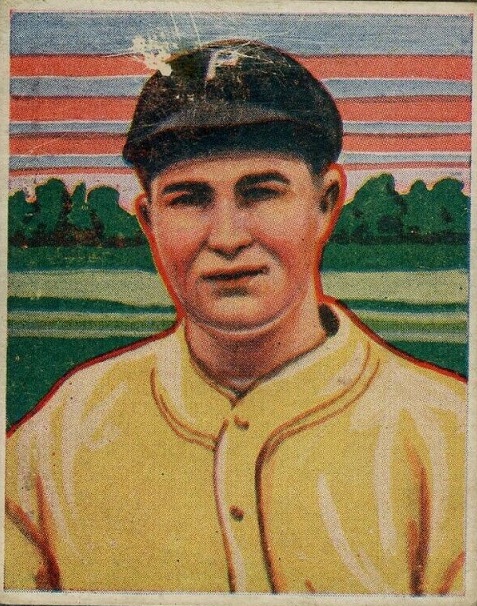 These card are definitely a strange set. It seems like they (or just he) took their time with the background design idea, making for some colorful cards, but this doesn’t look anything like Paul Waner, and clearly that jersey color was not a Pirates color. Here’s a spoiler alert that you will probably forget in time for it to not be a spoiler: The Lloyd Waner card looks even less like Little Poison, but it looks a lot like this card, with the background and jersey color being the same. I believe one of the “Waner” photos is actually the infamous generic gray Topps man, who looks like no player ever, yet he represents all of the players in many sets. 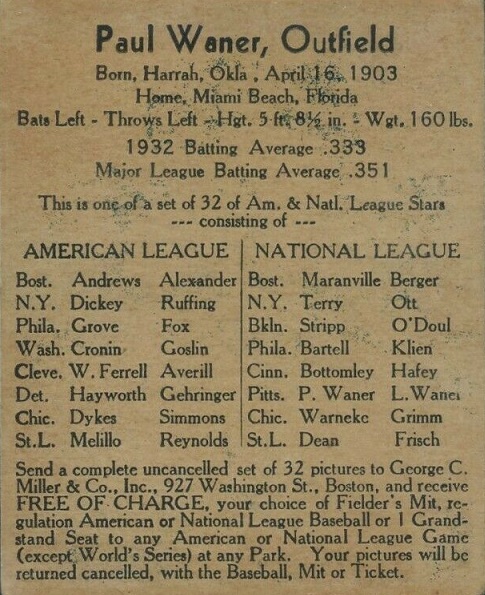 I like the back of these cards. You get the team-by-team checklist of players, showing you that they included plenty of Hall of Fame players. Nearly half of the teams (seven) has two Hall of Fame representatives in the set. Add in six other teams with one Cooperstown resident, and you have 20 Hall of Famers in a 32-card set. It’s amazing that without Babe Ruth or Lou Gehrig, possibly the two best players at the time, the New York Yankees were still represented by two pretty good Hall of Fame players. The Pirates two-card set could have included a different pair of Hall of Famers in Pie Traynor and Arky Vaughan, or depending on when these cards were released, Freddie Lindstrom and Waite Hoyt could have been the Cooperstown couple. The latter two joined the Pirates over the 1932-33 off-season. We know that the set wasn’t in production before December of 1932 because Goose Goslin ended up on Washington, where he was trade to on December 14, 1932.

If you’re interested in getting this card, just know that it is pricey and rarely shows up. The only sold auction included a Lloyd Waner card too, and they pair went for $670. There’s one live auction and it is $575 for a PSA 2. That’s actually the card you see in the scans above. You can see on the back above that it had an offer for items that required you to send in the cards, but they would would return the canceled card to you. The problem was that they trimmed the back ad off and wrote on the card, so there are some rough condition George C Miller cards out there. However, those are very affordable and offer you an alternative to the pricey nicer cards.