Today is the 92nd birthday of Pittsburgh Pirates pitcher Vern Law, who ranks as one of the best pitchers in franchise history. Even with missing two seasons due to military service, he still won 162 games for the Pirates over his 16-year career. Until Doug Drabek joined him in 1990, Law was the only Cy Young winner in team history. He won that award in 1960, which was his only All-Star season, despite it being his third best season according to WAR. Most people include him in their rotation when naming an all-time Pirates team.

Law has appeared here as a Card of the Day subject three times already, which is about the right amount of times now that we are two full years into this series (March 15, 2020 was the first one). His first time was as part of a group on the 1959 Topps card called Buc Hill Aces. Next up was a look at his 1985 Topps Father/Son card shared with Vance Law. Then one year ago on his 91st birthday, we looked at one of my favorite sets, checking out his 1962 Topps card. We went from four players, to two players, to one player, so why not show a card that has a picture of half of Law. That’s not why I picked the 1952 Topps card, but it certainly seems like he next appearance will be in the far corner of someone else’s card. To pick this card, I typed his name into Ebay and scrolled until I found something that caught my eye, though I didn’t give it much of a chance because it was the third card I saw. The 1952 Topps set is iconic though for multiple reasons, so it’s never a bad time to check out one of the Pirates all-time greats from this set. 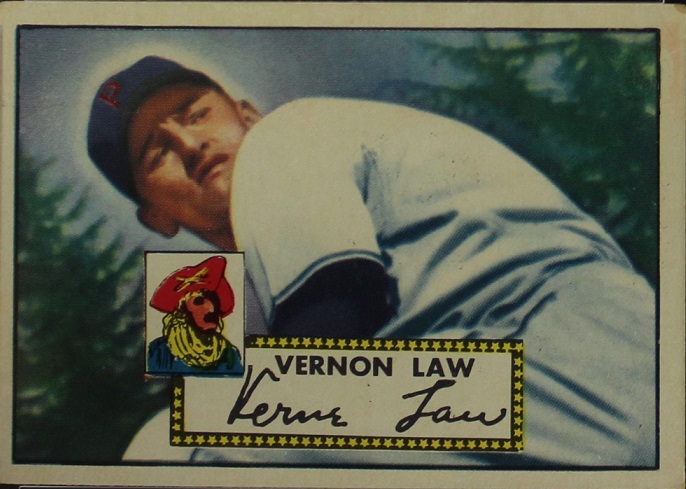 There are a few interesting things here to point out. One is that Law got one of the few horizontal cards in the set. I think the card would have looked a little better if they zoomed out a little before snapping the photo for this artwork, unless it was just the artist taking some liberties with the photo. They got the Pirates colors wrong on the hat, going back to the colors that they used before switching to black and gold in 1948 (more on this below). There’s another note here that works better after seeing the back. Notice the autograph here has an E at the end of his first name. I’m used to see either Vern or Vernon, like I assume everyone here would say. The final point of interest is the Pirates logo, which didn’t come out too well on this card. That’s really something unique to this card, because I just looked through a large group of 1952 Topps Pirates scans and none looked like that one. 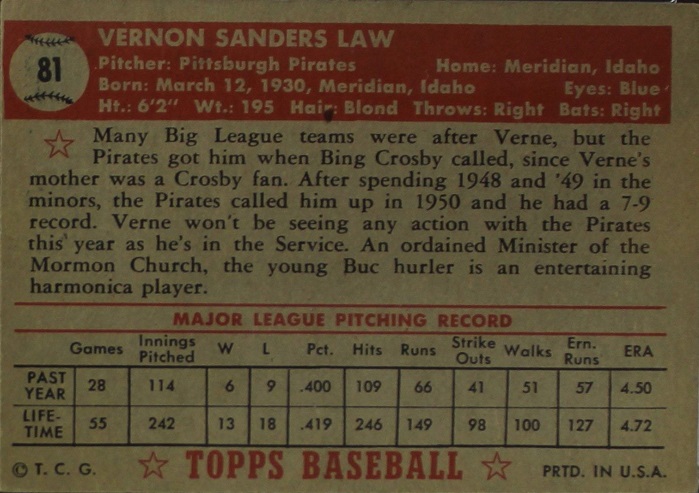 The back of 1952 Topps cards have one thing I always have to point out. They included hair and eye colors for the players. I’m not sure who needed this information other than possibly their artists, who may have been working off of black & white photos. They got some jersey colors wrong in the set (aka a lot of Pirates), so maybe that would have been better to include. Topps only went with one year of stats and career stats during some of their earliest sets. I don’t like it now, but you can’t hate on the original idea. This card notes that he will be in the service. Law ended up missing the 1952 and 1953 seasons, costing him the chance to play on some of the worst Pirates teams ever. As you can see, the Verne spelling from the front is on the back.

Ebay has 74 copies of this card currently listed. They range from $8 for one that has seen better days, to $170 for a PSA 5, which is well above any other price. For comparison, there’s a PSA 4 for $43 delivered. You can find plenty of autographed copies and many of them have more than his name, such as a $50 one that says “Vern Law – 1960 Cy Young”. This set is very popular on Ebay, with 61 examples of this card selling in the last three months. If you just want a nice presentable one that would probably grade 3-4, then you’ll pay about $15-$20 delivered, and plenty are in that range.