Today is the birth date of Pittsburgh Pirates All-Star pitcher Dock Ellis. He was born on this date in 1945, and he debuted in the majors with the Pirates in 1968. He remained around until after the 1975 season when he was part of what I think is the second worst trade in franchise history behind the Kiki Cuyler trade. The Pirates gave up Ellis, Ken Brett and young second baseman Willie Randolph for Doc Medich. Not only did Ellis and Brett each pitcher better than Medich, Randolph became a star, who put up 15 more WAR than all three of those pitchers combined in their careers. The only thing in my mind that keeps it from being worse that the Cuyler deal is free agency existing, so there was no guarantee that Randolph would have stuck around in Pittsburgh. Plus, Medich was a good pitcher who they overpaid for, while Cuyler was a superstar they gave away.

Back to Ellis, who came back to Pittsburgh during the 1979 season. He won 96 games with the Pirates, including a no-hitter that he claimed to have thrown on LSD. While that claim is highly unlikely/false according to all of his teammates, it makes a good story for those who don’t like to fact check, keeping his legacy as a solid big league pitcher alive. Ellis appeared here a year ago today for the same reason he was chosen for today’s subject. That day we looked at his 1973 Topps card. He was here again on the anniversary of his no-hitter, when I selected the most Dock Ellis of sets, the 1975 Topps set. Today’s choice is just one that caught my eye, as I looked for something besides the typical regular issue Topps cards that I have to use for so many players during his time. Topps produced a set called Topps 206, which is like the iconic T206 set, made popular by the million dollar Honus Wagner card. In 2021, Ellis was part of the set, and today we look at this new card, featuring an older player on a much older set design. 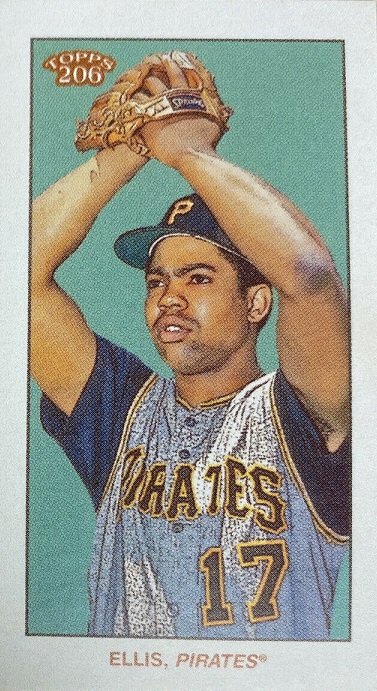 If you’ve seen the original T206 cards, then you’ll see the resemblance here. They are smaller cards, both in height and more narrow than your usual cards you see now. The original cards had the white borders, with the last name only (in most cases) and the team name, though they went with city (and league if necessary), while this one says Pirates. An original T206 of a Pirates player says Pittsburg without the H at the end, which was the official spelling at the time. Those cards were artwork based off of real photos and most had solid backgrounds behind the player. The originals didn’t say T206 anywhere because that name was bestowed upon the set at a much later date when all cards new and old were cataloged for the first time. The “T” stands for tobacco cards, while the “206” was just a random number picked by the guy who sorted them out, Jefferson Burdick. 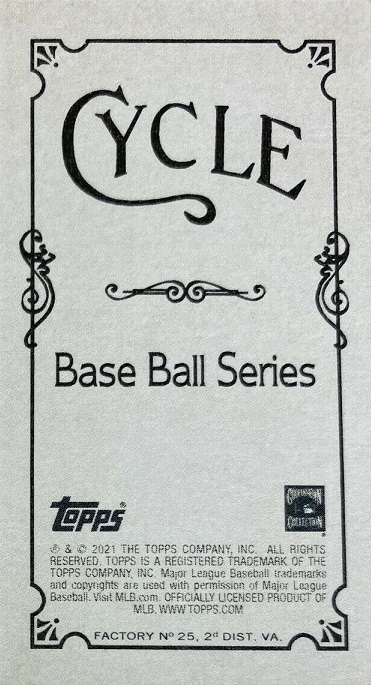 The backs of the original T206 cards advertised cigarette brands from the 1909-11 era, with some of those backs being worth much more than others now due to remaining availability. One of those brands of cigarettes was called Cycle, and it looked very similar to what you see here, except for all of those logos and legal mumbo jumbo. They didn’t need that stuff back in the day. The Cycle backs are much tougher to find than the common brands, but they aren’t the toughest ones. There were actually two different Cycle backs for different print runs in the T206 set, and the back for the latter run (referred to as 460 series cards) is worth more than the other back (350 series). Topps used the Cycle level of rarity during their printing of these cards, making just 25 copies of each Cycle back per player, which is very tough, but not the toughest to find.

If you’re looking just for the Ellis card and the back brand doesn’t matter, then you’ll pay about $2-$3 delivered, with a handful of options in that price range on Ebay right now. There’s one with a tougher Old Mill back for $90. However, this tough back sold for $21 recently, so that Old Mill price is really high for an easier to find card. If you find one with a Lenox back or a Ty Cobb brand, those are worth extra.