Today’s Pittsburgh Pirates Card of the Day comes from one of the most groundbreaking sets of the somewhat recent history. Everyone was enjoying baseball cards until 1989, just going about their collecting business until the Upper Deck company came out and took things to another level. Their cards were glossy, high quality cards, with great photos. Their packaging wasn’t the same as everyone else, with a foil wrapper. They had holograms right on the cards! Also, they cost more per pack than everything else, so the quality cost money. One of those cards from that first set was John Cangelosi, a small, speedy outfielder, who played for the 1987-1990 Pirates. He was born 59 years ago today and he makes his first appearance in our Card of the Day series. Here’s a look at card #67 from the 1989 Upper Deck set, featuring John Cangelosi. 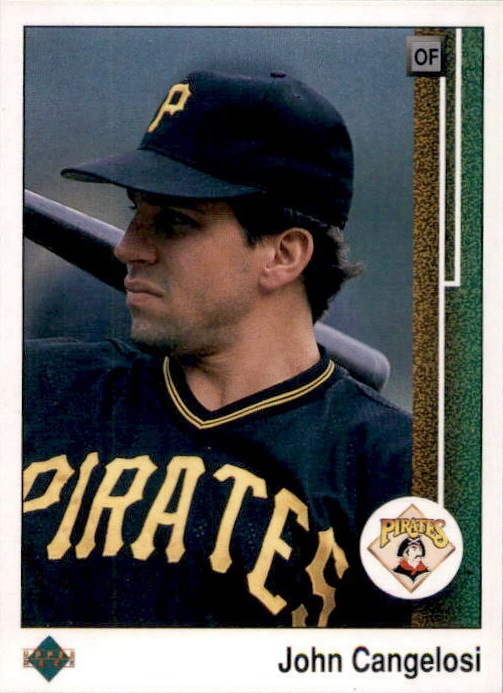 If you’re new to cards, then you’re probably looking at this card like it’s nothing special. In 1989, this was as good as it gets, and it was a big step up from anything in the past. The glossy photo quality really sold these cards on a lot of people, as did the quality back (see below). Obviously you already know I love that logo from this time period, and I like what they did on the side with the dirt/grass look, with the foul line down the middle and the position is listed in the top right in what has the look of being written on first base. The Pirates colors look good here with the black top and matching cap. 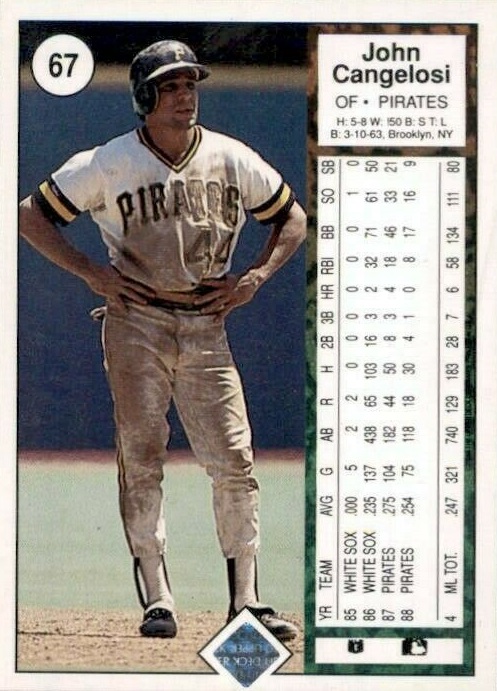 The backs of these cards added a second high quality photo, something you just didn’t see back then. Other sets had photos on the back, but prior to this, you’re talking about Fleer having small black and white photos, then Score adding a small color photo (usually just the face) during their first set in 1988. There was also a set made by Sportsflics from that era, which had something similar to the Score photo. This was a photo that took up more than half of the back, which was also glossy like the front, and it was something else that Upper Deck really raised the bar on for everyone else. The stats were almost secondary here, and they were even facing sideways to let the picture take center stage. The dirt/grass color design on the side of the front is continued on the back, though it goes top-to-bottom here and not side-to-side.

In the bottom middle, you can see the hologram. That was placed on the card to prevent counterfeiting. That was great back then, but no one is going to be reprinting commons from this set any time soon. However, it was good to have for the Ken Griffey Jr rookie card, which was going for $100 at one time before grading companies were around.

If you’re interested in this card, you’ll be happy to know that there are plenty of options on Ebay right now, with 55 current auctions listed. Most are very cheap, though watch the shipping if you buy one. Only two auctions are noteworthy here, both autographed, one in black marker and the other in blue marker. The blue looks much better, but the price is $20, while the black is $7 delivered and it has a best offer option. There are quite a few sellers who have this card for under $2 delivered. This is a popular set, but it’s not like the older sets where people collect them one-by-one. Only one Cangelosi card has sold in the last three months.