The second greatest shortstop in baseball history was born on this date in 1912. Arky Vaughan played for the 1932-1941 Pittsburgh Pirates, where he averaged 6.8 WAR per season. His career numbers would probably get his the recognition he deserved if he didn’t retire for three years during WWII when he was just 31 years old, coming off of a 5.4 WAR season. He likely would have been dominating those years with watered down competition, then been better during his 1947-48 seasons, because he wouldn’t have been out of baseball so long. Luckily, many people have recognized his greatness in recent years, but he is still probably one of the most underrated players in baseball history.

WAR has helped people see what gets lost when staring at a large group of stats. It’s an accumulating stat, so the longer you play without falling below replacement level quality, the more WAR you will have at the end of your career. Vaughan played 1,817 games and compiled 78.0 WAR, giving him an average of .043 WAR per game. Only insane people think Honus Wagner isn’t the best shortstop ever, but let’s look at Vaughan compared to other Hall of Fame shortstops in WAR per game.

George Davis .036 (bet you didn’t expect him here this high)

Bill Dahlen .031 (oh wait, the clueless voters didn’t put him in again this past year)

I left off Ernie Banks because he played more games at first base than shortstop, plus he played some third base and outfield during his shortstop years. I also didn’t include Robin Yount because nearly half of his career was spent in the outfield, but both players would have ended up in that cluster group in the middle, ahead of the lesser quality greats like Jeter, Aparicio and the ones I didn’t list due to lower numbers. For the record, Wagner is at .047 per game.

This is a Card of the Day article, but I thought Vaughan deserved to be put in better perspective to show I’m not just throwing out that “second greatest shortstop” title. Vaughan has been included in this series four times, but only once on his own card, and that was 15 months ago. I used cards that had him with Wagner, with Cy Blanton, Gus Suhr and Paul Waner, and with Lee Handley. It’s time for another solo card, so here’s his 1934 Goudey card. 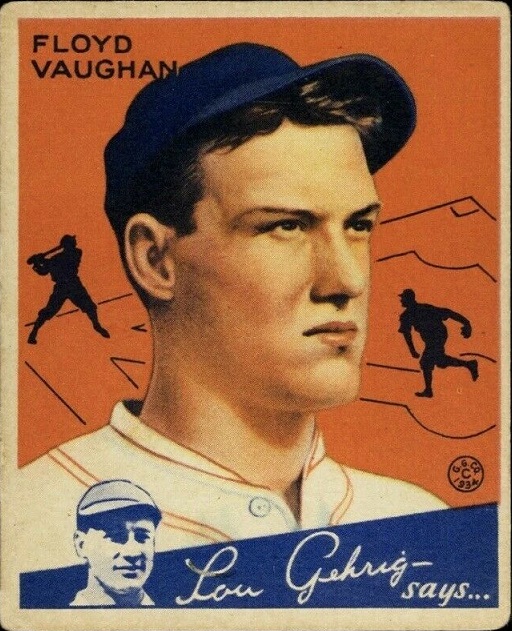 The 1933 Goudey set is extremely popular. The Vaughan card in that set basically looks like this one without the baseball scene and Lou Gehrig inclusion at the bottom. The photo/artwork is basically the same and the background color as well. I prefer this card because of the extras. The other one is a bit plain, but to each his own. The Lou Gehrig part is a continuation onto the back, where he gives a scouting report of each player. So take another look at the front here, then we can head to the back. 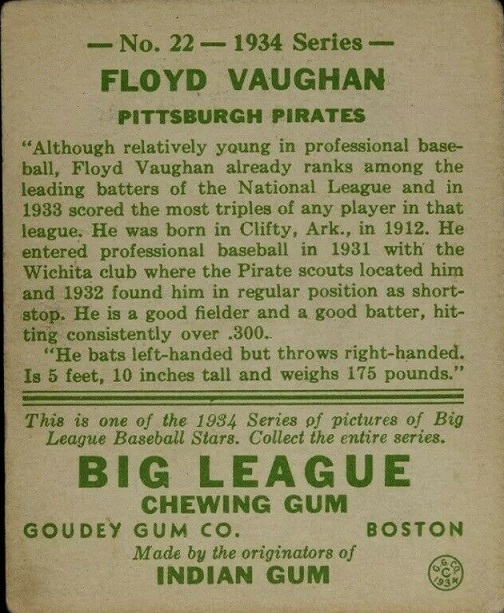 I like the back setup and look here as well. The bio section is in quotes as if it is coming from Lou Gehrig himself, but he wasn’t really sitting there writing these himself. Vaughan had two years in a different league before inter-league play and before TV, so Gehrig probably knew almost nothing about him, but I guess it was a good selling point for kids to think the great Lou Gehrig was writing out these card bios. I like that Vaughan is said to be consistently hitting over .300, just two years into his big league career. He only played one year of minor league ball, which was honestly probably one year too many, though his defense was a little rough at first, so maybe not. One other thing to mention here…no use of the nickname Arky.

The fact that the 1933 Goudey set is more popular doesn’t help the price of the 1934 set, because it’s still considered to be popular. There are eight copies of this card on Ebay right now and they range in price from $45 for one that looks like a 1930s kid folded it in half, to $2,640 for a PSA 8. The rest are priced between $110 and $400. The one for $110 seems like a good buy to me because people are asking twice as much for a similar condition card graded by PSA, but this one is done by SGC and it’s graded as a three (Very Good condition). PSA cards will hold their value better, but you’re basically paying for the exact same thing. Also, an SGC 3 just sold for $110 and the live auction has a best offer option.