Today’s Card of the Day was picked a few days ago because of the photo on the card. I saw it while searching for something else. Without knowing it at the time, I was also picking a player who should have appeared in this series long ago. This is the first appearance of outfielder Al Martin in this series, which started two years ago around this same time. He played for the 1992-1999 Pittsburgh Pirates, and appeared in our daily history article not long ago for a recap of his trade to the San Diego Padres 22 years ago today. Eight years of service and a significant trade should have got him at least one Card of the Day article much sooner. Well, the best I can do is make up for it today, then get him back in the series again before two more years pass. We start his journey with his 1996 Upper Deck Collector’s Choice card. At least this set has been here before, once for Mike Kingery and once for Steve Parris. Here’s a look at the set once again with card #682 featuring Al Martin. 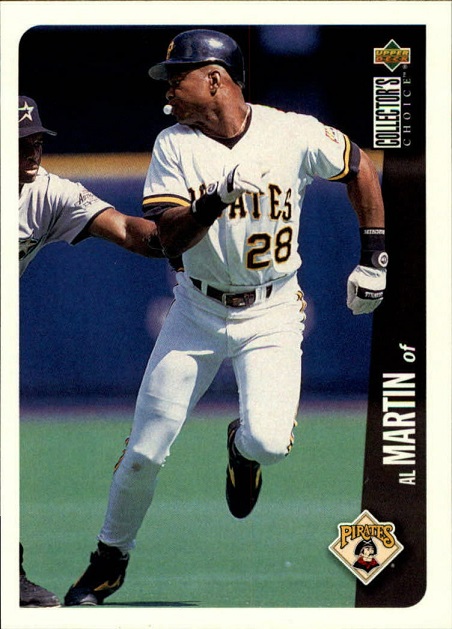 This is a great photo of a moment that likely went wrong for the Pirates by the look of the scene, which I tried to figure out and I believe that I found it. It looks like Martin is calmly getting tagged out by the fielder from the Houston Astros, and it looks like he’s trying to get back to a base. If I had to guess, I’d say this play is from August 6, 1995 in the seventh inning when Martin walked, then got picked off. I got to that by figuring out that it was a 1995 Pirates home game versus the Astros, with the “FANS” patch on the left sleeve being the key to identify the year. It’s obviously a day game, so that eliminated half of the Astros/Pirates games in Pittsburgh. I then looked at the play-by-play for the other four games and found only one play that seems to fit what we see here.

I did that research as I was writing up this article, so that’s clearly not the reason that I chose this card. It’s pretty obvious that I picked it because of the fact that he’s blowing a bubble right in the middle of a play, which as I said, appears to him trying to avoid a tag during a play that went 1-3-6 in your scorebook. The bubble makes this card so much better, and I already liked it because of that Pirates logo in the bottom right (I will never stop pointing those out). 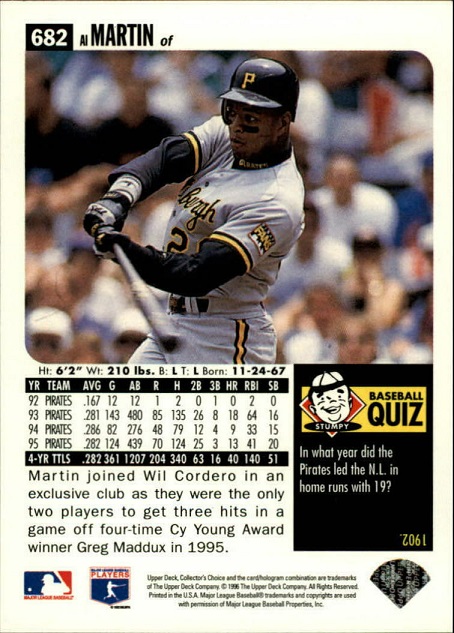 Here’s the back of the card and I like the picture here even more because I like the gray road uniforms better. If he was blowing a bubble in this photo I would have saved this card for my final Card of the Day article after I did all of the other Pirates cards in existence. The stats here are somewhat limited due to the inclusion of a Baseball Quiz. Like usual, I have this peculiar habit of reading the answer first, without even thinking about it. I believe I would have got this answer right if I had to think about it, but I didn’t know it off of the top of my head. The reason I think I would have got it is because I knew that Tommy Leach led the league in homers with six that year, so that would lend to the small season total and the Pirates being among the leaders. I like the obscure fun fact about Martin and Greg Maddux under the stats. I’d be surprised if Al Martin knew that, but not if Greg Maddux did, because he remembered everything.

If you’re interested in this card, you have choices besides what you see up top. That’s the base card and it can be found in the $2-$3 range from multiple sellers, though there aren’t many of these cards listed on the Ebays right now. There are also gold and silver signature cards that were tougher to find. They had facsimile signatures on the front and either gold or silver borders. Despite being tougher to find, they aren’t more expensive, other than sellers charging some extra for delivery.