I was looking through some old Pittsburgh Pirates minor league cards back on August 2, 2019 and I found a card of a player named Wink Cole. I know the date because I immediately tweeted out that I wish he made it to the majors with that nickname. That’s a 19th century baseball nickname on a somewhat modern player. As someone who reads up daily on baseball from the mid-1800s until now, you can bet that I would have a collection of Wink Cole cards if he made the majors with the Pirates.

I believe it was that same day that I found the card online, that I also found Cole on Facebook and sent him a message. Cut to 2 1/2 years later and I got a message from a gentleman named Winston Cole on Facebook recently and sure enough it was him. I immediately remembered today’s Card of the Day and we quickly arranged a talk for this article. What I didn’t know at the time was that our conversation would lead to another article that will be up on Pirates Prospects soon, talking about what it was like in the Pirates (and Kansas City Royals) system in the early/mid 1970s. For now though, we look at today’s Card of the Day, as well as the question on everyone’s mind about that nickname.  Here’s a look at the 1977 TCMA Wink Cole card, which was part of the Salem Pirates team set. 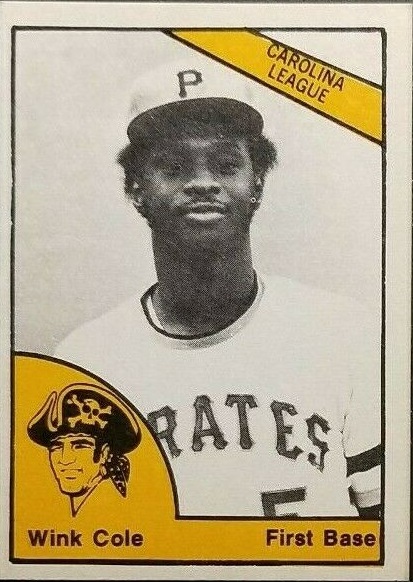 I’m a big fan of the look of these cards. They are very rare for cards of that era, as you will see in the pricing section below. The use of black and white photos is a bit odd when you first see it and realize the card is from 1977, not 1947, but it works here. You have to love that the team was using the Pirates logo at the time and the same style writing as the big league club on the jerseys. The one odd thing here is that they don’t mention the team name on the front, but they let you know that they played in the Carolina League, which was one of two A-Ball teams for the Pirates that year. They also had the Charleston Patriots of the Western Carolinas League.

You’re already getting impatient about the nickname, aren’t you? The story behind it according to Mr Cole is that he didn’t like that his first name Winston was just like the cigarettes brand, so while he was in grammar school, his friends gave him the nickname Wink. He said that when a soda called Wink came out and it was called the sassy one, his childhood nickname became permanent.

I asked him if he collected cards and remembered this particular card as well.

“I collected some when I was growing up and they may still be in the house I grew up in,” Wink said. “When I started playing in high school, I wasn’t collecting any, but I was an avid newspaper reader and kept up with the boxscores of all the teams. I may still have that card, and someone sent me one for an autograph a couple of years ago.”

This particular set is very expensive due to being so rare, but it’s also collectible because it has the first card of Tony Pena, so I asked if the 20-year-old Pena was showing big league potential in his first full season.

“Tony was awesome and raw at the time, but you could see the talent,” Cole said, before adding a second thought about another teammate of his from another season. “Alberto Lois was like the second coming of Roberto Clemente.”

Lois was a tragic story of a career cut short due to an auto accident that left him blind in one eye right before he had a chance to really establish himself in the majors at 23 years old. That Clemente comparison might seem blasphemous to Pirates fans who saw Clemente, but Lois was getting those types of comparisons as a player, so Cole wasn’t alone in that thought.

One more quick story to share here because a lot of what we talked about will be in the second article. Cole came to the Pirates in a five-player trade with the Royals in December of 1973, which included Nelson Briles and Kurt Bevacqua. Cole mentioned that he came through the Royals Academy with U L Washington, who finished his career with the 1986-87 Pirates. Washington was famous for keeping a toothpick in his mouth while he played, something that I did after I saw it on his card and I got yelled at for doing after about 15 seconds. I shared that story, which led to this revelation about the famous toothpick.

“To be perfectly honest with you, UL actually got that from me, because I didn’t chew tobacco and gum made me thirsty.”

So all of this time it was Wink Cole who got me in trouble as a little kid for trying to do something I saw on an old baseball card.

Anyway, back to the card, or should I say the back of the card: 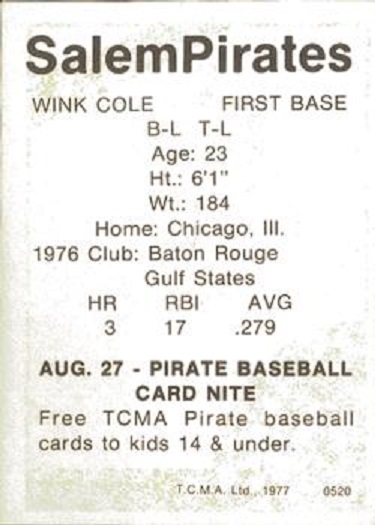 The back gives you the team name that the front didn’t let you know. The had just the triple crown stats on the back from the previous year, as well as all of his vitals. If you were a little kid in the Salem, Virginia area on August 27, 1977, you could have got this team set for free.

This card can be had for $8.41 on Ebay and it’s the only one that has been on the site over the last three months, except for the one in the team set. That sold in January for $140, and it included six big league players, with Tony Pena being the most noteworthy.