Today is the birth date of the great Willie Stargell. He was born 82 years ago today. He played for the Pittsburgh Pirates from 1962 until 1982. Right in the middle of that stretch, Topps came out with something different in their 1972 Topps set. It was a subset of 16 cards called “Boyhood Photos of the Stars”, and that name told the whole story. Topps got childhood black & white photos of 16 bigger name players and featured them on the card, along with a much smaller current photo of the player. It was an interesting idea, but it didn’t catch on and Topps soon abandoned the series after including six more cards in the 1973 set. Today we look at card #343 from the 1972 set, featuring both young and slightly old (in baseball terms) Willie Stargell. At this time, Stargell was just coming off of hitting a career high 48 homers, while helping the Pirates to their fourth World Series title. 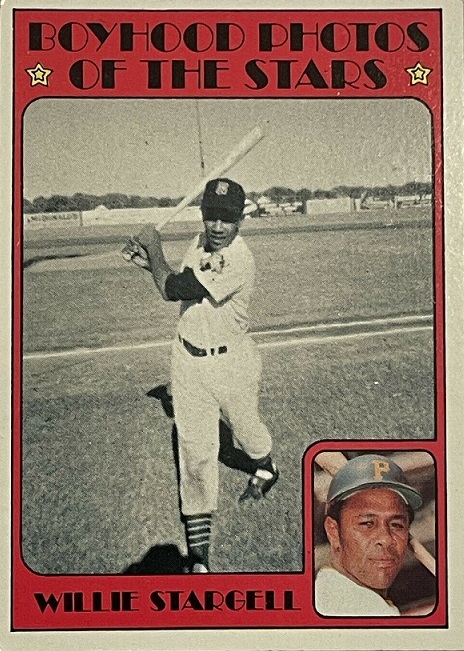 I’ll note that most of the players who appeared in this subset gave Topps a much younger photo, so Stargell is a bit of an outlier. There isn’t a huge difference between this submitted photo and the 22-year-old who appeared on his 1963 Topps rookie card. However, I like this photo much better than most of the others because you can see the baseball player here, and not some little kid standing in his yard who sort of looks like a big league star. The regular cards of players in the 1972 Topps set really look like they were trying to capture 1972 with the front design, but the Boyhood Photos subset design is a big more subdued, with red borders for everyone and two of those 1972 stars at the top. 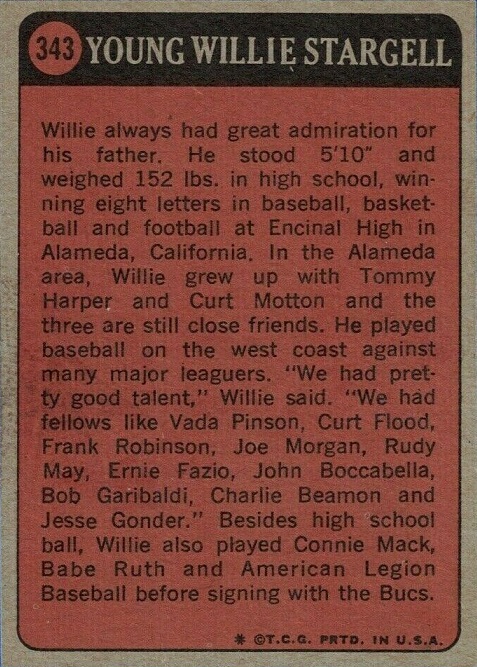 The back of these cards give you a nice summary of their baseball youth before they signed to play pro ball. Stargell name drops a lot of players, most of them older fans would recognize as well. I certainly hope you at least recognize Vada Pinson, Curt Flood, Frank Robinson and Joe Morgan. Jesse Gonder should also be familiar, just because we mention him here every year on his birthday, as well as other random mentions, and he’s been a Card of the Day subject. I’ll forgive if you don’t know any others, though Rudy May and Tommy Harper were pretty good players. The back here has the same coloring of the other 1972 Topps cards, but they left off the stats and things like birth date and height/weight, etc. I do like how they refer to him as “Young Willie Stargell”.

If you’re interested in this card, you’ll be happy to know that Ebay (as of the time of this writing) has 93 auctions available. This is not a popular subset, so the prices might surprise you on cards that are now 50 years old. Despite the lack of popularity, the 1972 set itself is popular, so the cards do trade hands. There are 22 sold auctions for this card in the last three months. A PSA 9 copy sold for $55 delivered just over two weeks ago. PSA 8 copies have recently sold for $35 and $45 each delivered. Out of the other 19 closed auctions, 15 have sold for less than $5 delivered. Of the 93 current auctions, 25 of them are priced at $5 or less. There’s also a PSA 9 for $52 and a PSA 8 for $36, which are good prices based on recent sales.