Today is the 75th birthday of Kent Tekulve, one of the top two relief pitchers in Pittsburgh Pirates history. We have featured him here twice in the past, the first time showing his 1983 Topps Super Veteran card, followed by his 1976 Topps rookie card. Today’s card was put out after his career was over, but it features him on a card design from his playing days, showing him as a member of the Pittsburgh Pirates. The 2003 Topps Fan Favorites set took popular players and used never before seen photos on card designs from the past. It’s one of my favorite sets, and it’s because of cards like the one we are looking at today. 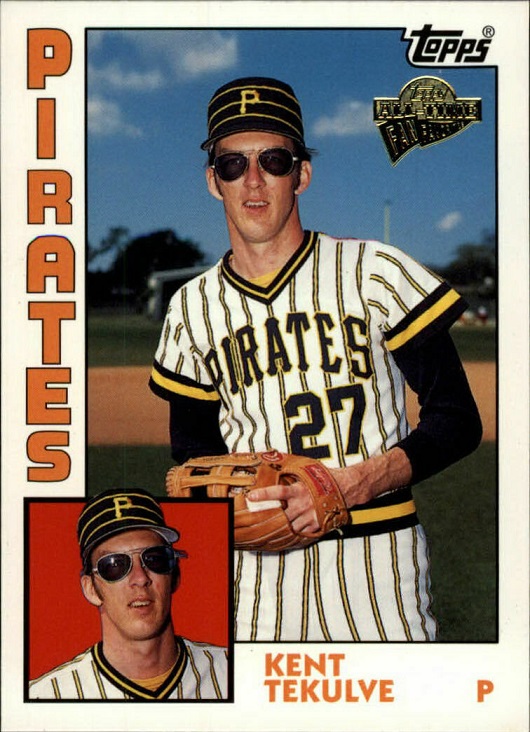 There are two things that tip you off right away that it’s not a 1984 Topps, though one is only 99% fail safe. The most obvious is the Fan Favorites logo in the top right. The other would be the jersey that Tekulve is wearing. The Pirates wore that particular style during the 1977-1979 seasons. They usually didn’t use old photos of players unless they couldn’t get something new during the year for whatever reason (injury, trade, brief big league time, etc). Using a picture from at least four years earlier seems very unlikely, but not impossible.

Let me just say that these uniforms are my least favorite during the mix-and-match era for the Pirates. Now that the disclaimer is out of the way, how great does the 1977-79 era uniforms look on this card, with that glossy, high quality photo. That photo/card quality is another telltale sign that this isn’t a 1984 Topps card. The pillbox hat really caps it off well, bad play on words intended. 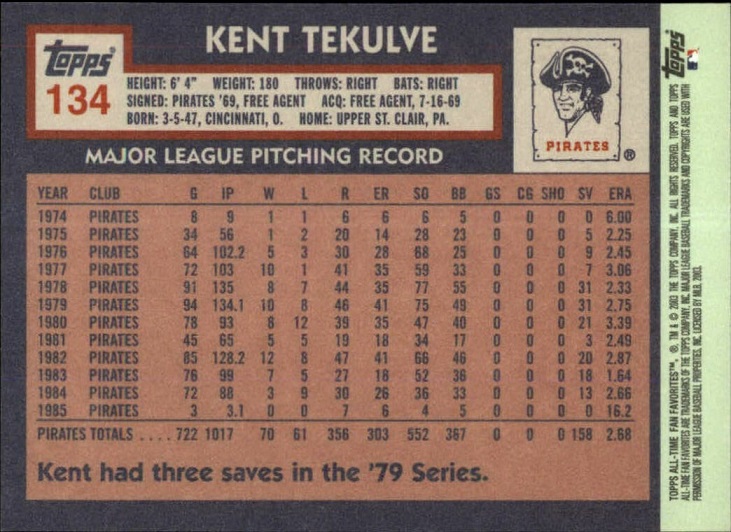 Topps made an interesting decision here with the stats. The decided to just use his Pirates stats, stopping after he was traded to the Philadelphia Phillies early in the 1985 season. I was expecting either his full career stats, or his stats up to the 1983 season, which is what you would have seen on a normal 1984 Topps card. This card back looks exactly like what you would see in 1984, except for that light blue/green band on the right side with all of the legal mumbo jumbo. Since they kept it like the 1984 Topps cards, you get that great Pirates logo from that time. Even without the right coloring, it still looks great.

If you’re interested in this card, check out a website called Ebay, where you can find 25 examples for sale. Some are autographed copies, and those can run from $25 to $35, as long as they were signed prior to going into packs. Other people have got their copies signed afterwards and those can be found under $20. The factory autographed cards have an added little logo on the front along with the Fan Favorites logo, so make sure to check for that if you want the more desirable option. The regular card can be found for $2-$3 delivered, with multiple sellers in that range. Happy collecting!