This is our second time covering the 2012 Topps set and it’s the second time that I landed on a card with an error and corrected version. That’s purely by coincidence, as I wanted to include Michael McKenry (celebrating his 37th birthday) today for the first time in the Card of the Day series and his 2012 Topps card caught my eye. I didn’t even know he had an error until I saw it in the title of one auction. The first time we covered this set, it was to feature Kevin Correia, and he too has an error/corrected version. You should probably wait to click that link if you’re planning on it, because the errors are similar, as Topps made a ton of them in the 2012 set and they were all the same type of problem. The difference really is that hitters and pitcher had different errors, so once you see both of these articles, you’ve basically seen them all.

Like usual, we start with the front of the card, which is what actually caught my eye in the first place. So here’s card #99 from the 2012 Topps set, featuring Pittsburgh Pirates catcher Michael McKenry. 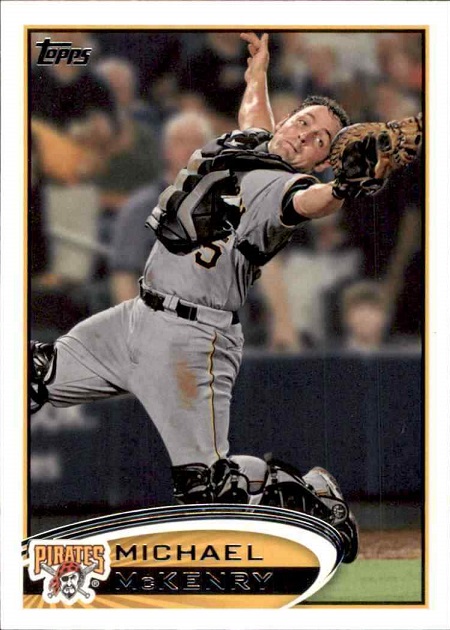 I looked for a better scan of this card, probably for too long, but they were all either too small, had printer lines or bad coloring (looking too bright or too dark), or the card was autographed. This is the best clear scan I could find, but the colors on this card in person look a little better than this example. It’s a great photo by the Topps resident photographer (they actually have more than one and not all actually work for them, but just go with it). You get this great action shot, and even though I don’t see the ball, I’m declaring he caught this ball. I’m not going out on a limb here by that declaration. It was actually from July 25, 2011 and he’s showing here catching a bases loaded pop up off of the bat of Nate McLouth, then with the Atlanta Braves. Chris Resop came on in relief of James McDonald and stranded three runners thanks in part to this play for the second out of the fifth inning. This happened the day before the infamous 19-inning game with the worst call you’ve ever seen, though I’m not sure if Jerry Meals actually saw it, and he was closest to the play.

Here’s the back of the card, starting with the corrected version: 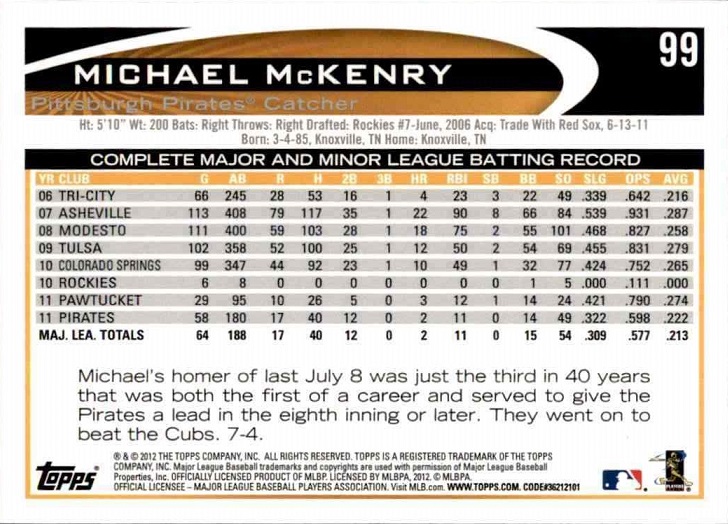 Here is the error version. I’d suggest not scrolling by the scan if you would like to find the errors on your own. There are three of them. 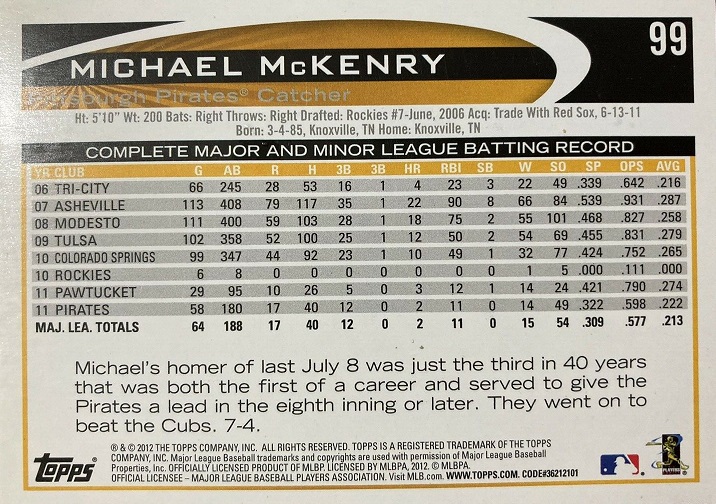 Okay, I’m guessing most of you didn’t even search for the errors and I don’t blame you. The errors are in the stat category line. They list triples twice and use “W” for walks (a forgivable error) and “SP” for slugging percentage. I’ve never seen it written as “SP”, so that’s not forgivable Topps, but you made the correction, so just don’t let it happen again.

I mentioned in the previous 2012 Topps article that the front/back designs here are a mediocre offering. Nothing exciting except for the Pirates logo on front and usage of team colors, but they have definitely had worse design ideas over the years. Mediocre isn’t bad 61 years into their production at this point.

If you’re interested in this card, you can easily find either corrected/error version for $2-$3 delivered. Many people don’t realize that they have the error version for sale, but there’s no real added value because Topps really made a lot of errors in 2012. There are nine autographed copies available, starting as low as $5 delivered. There are also insert versions available that are harder to find, including a black, gold, mini and Golden Moments. All can be found on Ebay for $7 or less.