This is the second time that we have featured Neal Heaton in this Card of the Day series, but it’s the first time for the 1991 Fleer Ultra set. I used Heaton today because he was born on this date in 1960, plus he played for two Pittsburgh Pirates playoff teams, joining the team in 1989, then staying for the 1990-91 National League East championship seasons. Once I decided on using Heaton, then I looked for a set that hasn’t been used in this series yet. That’s why we are looking at the 1991 Fleer Ultra set today.

The baseball card market saw huge improvements in card quality starting with the 1988 Score set, followed by the immensely popular 1989 Upper Deck set. Fleer decided to step up their game in 1991 by issuing a second higher quality set and calling it Fleer Ultra. Reading back on some reviews, it was not very popular. In my mind, they made a real splash with the 1993 Fleer Ultra set, which is one of my favorite sets from the decade of the 1990s. The 1991 set has significance though, since it was their first attempt. Practice makes perfect they say, although I like an idea they had with the back here. The front design was not something to write home about (and honestly, how many people at your house care about baseball cards?). 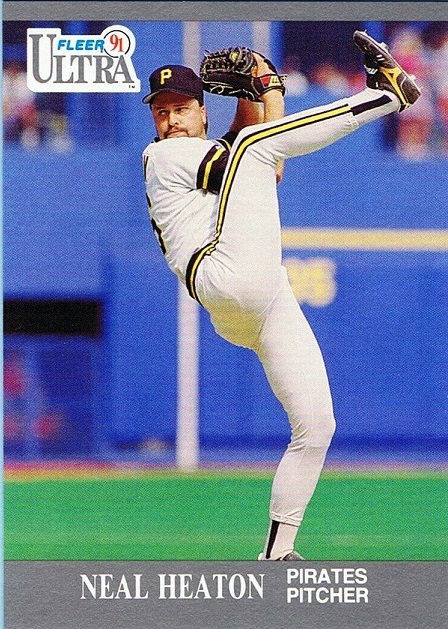 As you can see, the front design is boring. Imagine deciding to do your first higher quality set, then having a meeting where everyone agrees that  two gray stripes with plain white writing is how you’re going to kick open the doors and get the attention of everyone. Speaking of kicking, look at that leg kick from Heaton. That almost doesn’t look humanly possible, but that’s a great photo to feature. Before the front design puts you to sleep, let’s jump to the back. 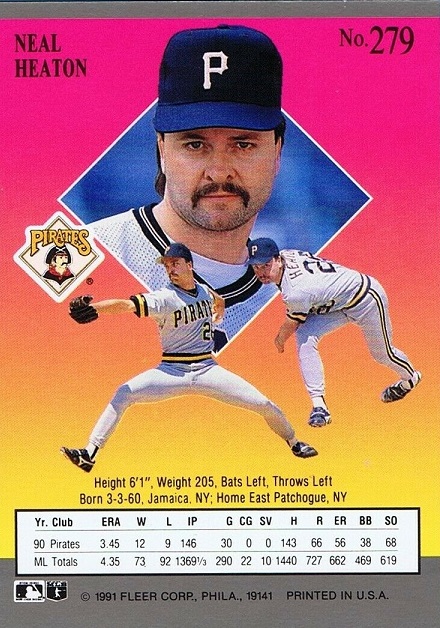 No one is sleeping while looking at the back of this card. It’s brighter than that kid you used to cheat off of in high school (you thought I didn’t know?). It’s definitely quite a contrast from the yawn-inducing front of the card. The back offers you three new photos of Heaton, all show him wearing the road grays as well, giving you a different look than the front. You have a portrait shot and two other shots of his pitching motion different from the front. There’s also one very important thing on the back that was missing on the front. There’s that great Pirates logo from that era, a must have on all cards from this period.

I’m willing to sacrifice individual year-by-year stats if there is a good reason. I absolutely love the backs of the 1993 Fleer Ultra cards, so I have no problem with the stats presented this way you see above. I’m definitely not in love with the bright colors here, but the three new photos and team logo are enough for me to accept the one year of stats.

The 1991 Fleer Ultra set is typical for the cards of this era. Everything was overproduced and it’s easy to find. Heaton was coming off of his only All-Star season when these cards came out, but he still went for common card prices at the time and that holds true today. There’s nothing of interest on Ebay for his cards at this moment, so you’re basically looking at spending $2 delivered for one card, and there are 15 auctions running right now (not all in that price range, always check shipping charges first).