My favorite thing to do here is to terminate two flying creatures with one projectile. Today’s Card of the Day is the first for the very rare 1963 Sugardale Wieners set, as well as the first card of Pittsburgh Pirates pitcher Don Schwall. He played for the 1963-66 Pirates, so we probably should have knocked off his first card in this series at this point. I’m not going to count the Card of the Day articles that I have posted here already to figure it out, because I don’t have to do that. The dashboard here tells me that this is the 530th Card of the Day article, so Schwall shouldn’t have waited this long. After all, only 422 players have played 4+ seasons with the Pirates, and not all of them have cards available, so he is at least four months overdue.

I picked the Sugardale Wieners set mostly because I’m immature, but also because I’ve wanted to use this set before and the previous players I had in mind didn’t have a decent scan available. So here we go with our first look at this rare regional set. 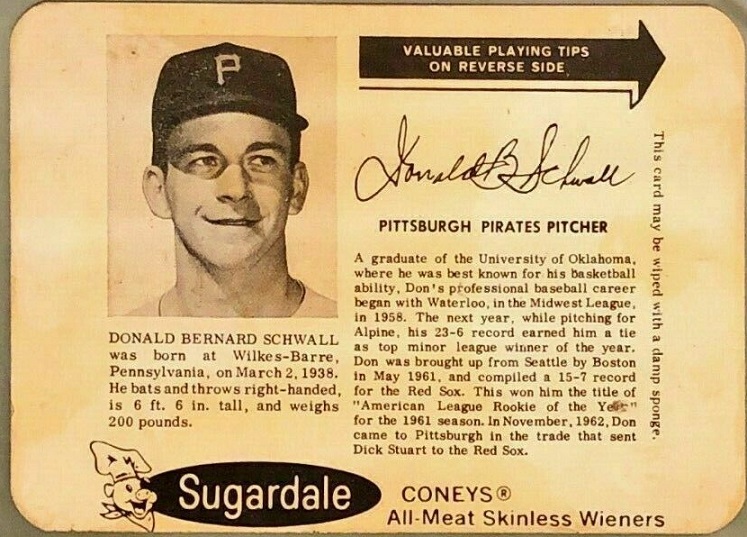 These cards are bigger in size than your average baseball card, plus they come with rounded corners. Measuring from the middle each way, the size is 3 3/4″ x 5 1/8″. There are 31 cards in the set, with 26 players from the Cleveland Indians and five players from the Pirates. No other teams are part of the set.

You get a small photo of the player, along with some biography info such as birthplace and date, height and weight, and throwing/batting side. Then you get a nice summary of their career, along with the team name/position and a facsimile autograph. Then at the bottom you get the ad for their all-meat skinless wieners. For your own knowledge, you can wipe down the card with a damp sponge if need be. 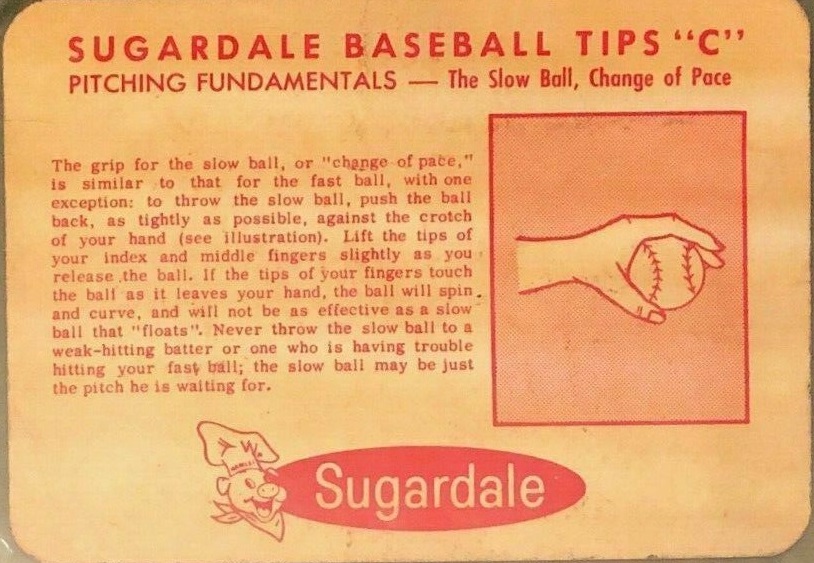 The back here gives you tips and a visual of how to throw a changeup, or a slow ball as it was known back then, though you can see that the “change” part of a changeup was slipping into common use at the time. It’s very important to make sure that you get the baseball pushed back tightly into the crotch of your hand before throwing it. Probably the worst part here is telling kids they should never throw a changeup to a weak hitter because he’s having trouble with your fastball. It’s really not that bad if you’re blowing away hitters in high school, but that’s not how you get good at throwing a pitch at a future level where everyone can catch up to a fastball.

These cards are extremely rare, so if you want one, you’re better off trying for a type card, rather than getting one of Schwall specifically. You have five Pirates total, including Bob Skinner, Don Cardwell, Jim Pagliaroni and Dick Schofield. You can cross of Skinner if price is an object because his card was short-printed, though one of his cards is on Ebay for $200, which is cheaper than one of the Schwall cards available. There are three Schwall cards up on Ebay right now and one is a PSA 1 that has a $175 or best offer option. The other two are both ungraded and the one has an asking price of $225, but it also has a best offer option. The other is $100 with a best offer option and it looks about the same as the others as far as condition. One thing to know with graded cards for this set is that they are bigger, so the PSA holder is over-sized to compensate. It’s much bigger than your average card holder. There’s no cards of Schofield or Pagliaroni currently up, but there’s a Cardwell for $100.