Johnny Ray has only been featured in this Card of the Day series once on his own, but he hasn’t been ignored here by any means. We used his 1985 Donruss Action All-Stars card for that one article. We also featured him here on the 1982 Topps Future Stars card with Bob Long and Vance Law, in addition to a four-card lot from the 1982 Topps Traded set and the 1987 Donruss Opening Day set, where he stole Barry Bonds’ spotlight. He’s been here a lot as you can see, but it’s his 65th birthday, so it’s time for another Johnny Ray article.

Today’s Card of the Day comes from the 1984 Topps Photo Rub-Downs set. This is a first time set and it’s a very interesting one at that. I have a few of these that I got in a box of old oddball cards. I did not use them for their intended purpose. It’s not really a card, but they were made by Topps (printed in Italy!) and they came in packs just like the regular cards. We need to look at these before I go into any details, along with some help from the instructions. 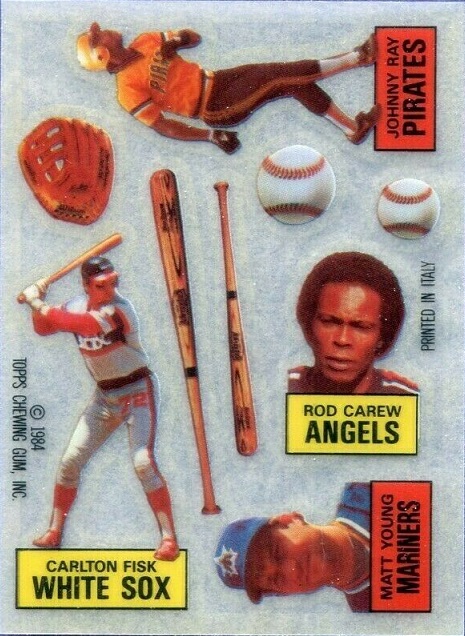 I’ll start by saying that there’s no need for a back scan here because it’s just a light reverse image of what you are seeing. A look at the instructions before I go into details, as well as a better look at the Ray portion of this card. 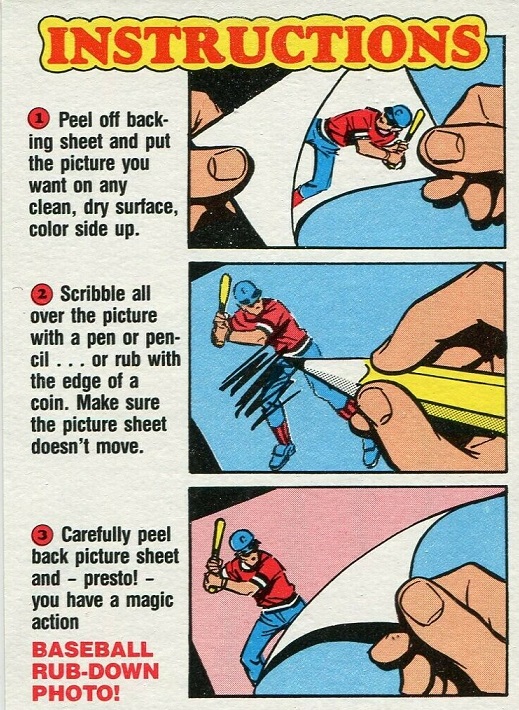 As you can see now, these were meant to go on things, such as notebooks, kitchen tables, walls and any other place a parent would complain about that going, usually for good reason. You peel the top part off, put it on a surface, rub with a coin and presto, something magical happens. The magic is that your card no longer has value, but temporarily you have photos of Carlton Fisk, Rod Carew, Johnny Ray, Matt Young, two baseball bats, two baseballs and one glove.

You would think that the introduction would have led to Ray appearing here on his own card, but I threw you a curveball. I never even threw a curve when I pitched, FB/SL/CH only, so I’m surprised I got you with that pitch, but here we are, looking at another shared card for Johnny Ray.

In the solo Johnny Ray photo, you can tell that these were not high quality photos that you were getting, despite the fact that magic was being used. The player name/team name is obviously much sharper than the player photo part. Those black and gold uniforms still look good though.

One pack of these “Baseball Photo Rub-Downs” got you two Rub-Down sheets and “one stick bubble gum”, their wording, not mine.

If these cards were all used for their purpose, then they wouldn’t still exist today in such a large number. Many were not though, so they can be found on Ebay readily available. Despite the fact that you have Hall of Fame legends Carlton Fisk and Rod Carew on here, plus the fact that they are 38 years old, they can be had for $3 delivered. One person is selling the entire 32-card set for $15 delivered (others have it for around $20-$25). If you choose that route, you would also get Bill Madlock, Jason Thompson, Tony Pena and Kent Tekulve cards. All 26 teams at the time are represented in the set, with at least three players from each team.

On Amazon, someone is selling an entire factory sealed box of 36 packs for $19. It would be interesting to open up one of those boxes and see if you got the entire 32-card set from the 72 cards in the box. The top lid of the box actually shows them being put on a notebook, obviously encouraging children to pick a good spot for them so their parents will be willing to buy more packs.