Today’s Card of the Day is a mini card of the man who they called Big Daddy. In 1986, Topps came out with a set of cards called Mini Leaders. There were 66 cards in the set, and each on featured a player who was among the league leaders in various pitching and hitting categories during the 1985 season. The only player from the Pittsburgh Pirates to make it into the set was veteran pitcher Rick Reuschel, so this set will be a one-and-done article in this series. Let’s get right into the card, as we celebrate the 37th anniversary of Reuschel signing with the Pirates. 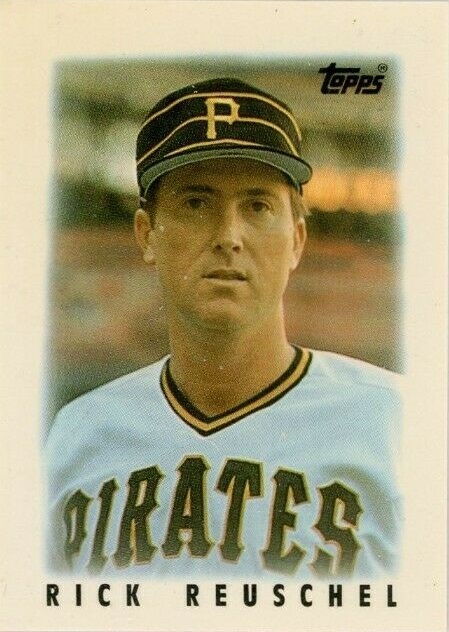 This card has a look similar to the Team Leader subset of cards from the regular 1986 Topps set, at least in design. The regular Topps cards from that year had the black border at the top, and a white border at the bottom, with the player name in black at the bottom and the team name in various colors at the top. The 26 Team Leader cards had the same white border fading into the picture design, though they used blue writing under the photo for that subset. For the record, Rick Rhoden is on the Pirates Team Leader card in the 1986 set. While the standard card size is 2 1/2″ by 3 1/2″, these cards measure 2 1/8″ X 2 15/16″. That doesn’t seem like much when you compare the two sizes on paper, but there is a clear visual difference when you see the cards side-by-side. You gotta love those 1985 uniforms and caps. 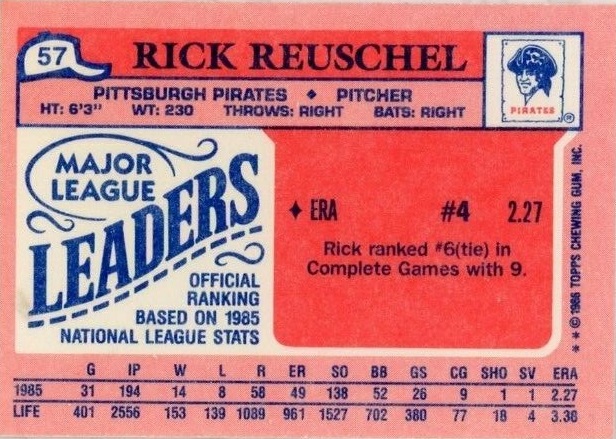 The backs for the regular 1986 Topps and the Mini Leader set are quite different. This one looks more like the stick of bubble gum that they used to include back then, melted onto the card and created this back. The regular set had a two-tone red on the darker side, with black writing. The 1986 Topps Traded set actually had a more similar look to the Mini Leader back, though that was standard for Topps to give their Traded set a lighter color back.

As you can see here, Reuschel got into the set by finishing fourth in the league with a 2.27 ERA. He also finished sixth with nine complete games. There isn’t a single pitcher in baseball who has completed nine games over the last four years combined, yet he finished sixth in the National League. His 14-8 record that season is quite impressive considering that the team lost 104 games in 1985. His teammate Jose DeLeon had a 2-19 record. Reuschel was actually the only pitcher on the staff to finish .500 or better, including all relievers. What is most impressive about that fact is that the Pirates signed him as a minor league free agent and he didn’t make the team out of Spring Training. You see that he put in 194 innings for the Pirates in 1985, but he also made eight starts in Triple-A that season before joining the big league club.

If you’re interested in this card, you’ll be very happy to know that it is both cheap and readily available on Ebay. Ten sellers have it for $2 delivered or less. The only auction of note for this card is one where some is selling 750 copies for $149, which also has a best offer option. If you could sell those cards for $2 delivered each, you could make quite a profit, but I’ll note that only one of these cards has sold in the last three months on Ebay, so it might be a while before you recoup your initial investment, even if the seller took a significant percentage off of the asking price.