One of the funniest conversations I’ve heard is when people talk about the old baseball players and saying that they couldn’t play in today’s game. My response is always “Tell me one player who could last a full season in pre-1920 baseball?”. That’s a trick question obviously because there isn’t a single player from 2022 who could go back in time and play a full season under those conditions. If they decided to stay for the first game after finding out they didn’t get a batting helmet or batting gloves or a decent glove to use in the field, the food/travel/general conditions would probably do them in within a week. Imagine a batter asking an umpire for time between pitches because the pitcher is going too quick, or even asking for a new baseball to be put in play? He’d be laughed off the field. I have no doubt that Mike Trout could dominate one game in 1888. He would probably have a record-setting week one as well if he just decided to go for broke and tough it out. By mid-season, he’d be looking for a ticket back to 2022, if the first eight hour train trip overnight didn’t do him in first (or the first guy who threw at his head). That’s not a knock at Trout, just using him because he’s the best player now.

I share that story because it leads up to today’s Card of the Day featuring Bill Farmer, catcher for the 1888 Pittsburgh Alleghenys. He actually only caught one game for the Alleghenys, but he had the honor of saying he caught the great James “Pud” Galvin in that only game, even if the game didn’t go so well (it’s detailed in today’s This Date article). I used Farmer for today’s card choice because he was born on this date in 1864 in Dublin, Ireland. I also used him because he has some great looking cards in the iconic 1886-90 N172 Old Judge set. I found a good scan of one of those cards and included it here so you can actually see the gloves that catchers used back in the day. The word “glove” is plural because catchers used to use gloves on each hand. You might now be asking “How did they throw the ball with a glove on their throwing hand?”. The answer to that question is why I always bring up the current players going back in time to play, as you will see in the photo below. 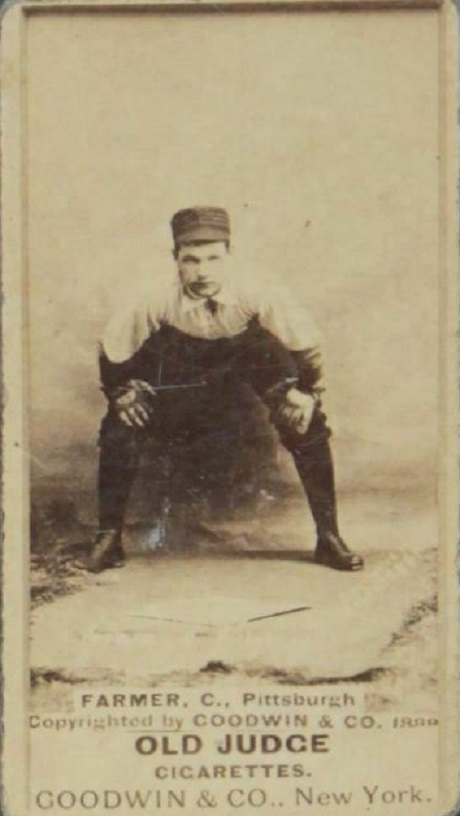 You can see on Farmer’s right hand (his throwing hand) that the glove there is smaller than the already small glove on his left hand. There are no finger tips on the right hand glove, so he was able to grip a baseball and make throws. You’re basically looking at the catcher stance from circa 1888, with no runners on base. To help save their hands and body, the catchers stood back a little from the batter with no one on base, but they moved up into the more traditional spot with runners on. In a game, he would also have a chest protector and a shoddy wire mask, and that’s it, besides multiple bruises and sore/broken/crooked fingers. I love these old photos because you can see the uniforms from the day, even if the colors don’t truly show up. It’s difficult to tell, but those uniforms have blue and red caps, dark blue pants and maroon stockings, because those were the lucky colors of manager Horace Phillips. If you look close, you can see the stripes on the cap. 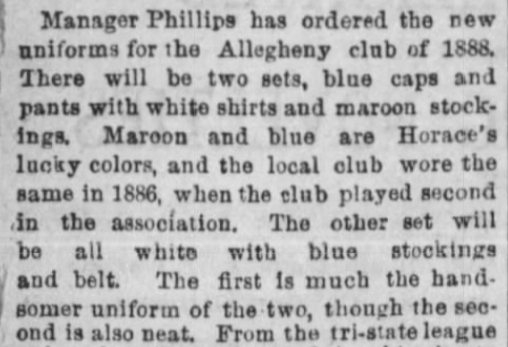 Farmer played just five big league games, all in 1888. Two of those games came with the Alleghenys, though he was with the team for much longer than you would imagine with that playing time, and he wasn’t injured at any point either. The other three games in his career came in the American Association with the Philadelphia Athletics. As you can imagine, he would be considered a common player in the Old Judge set, but that’s not always a good indicator of price range. Some of the most common players in the Old Judge set are also the most expensive cards. That’s because some players have fewer than ten known copies of the card in existence and there are multiple collectors trying to get every player pose available. It’s impressive that so many cards have made it over 130 years. Some experts have estimated that a total of 40,000 Old Judge cards still exist, though there are well over 2,000 different photos in the five-year print run (mostly 1887-89), so even using the word common is a bit of a stretch.

Anyway, for a low grade Farmer, you’ll probably pay around $200, or a little less if the card has been altered. Many Old Judge cards have the ads trimmed off, and some had the cardboard backing removed (collecting term for that is “skinned”). This particular card shown above is from a seller named Dean’s Cards on the Ebays, and it is graded PSA 4, which has a price tag of $1,100. That’s a bit high for that grade, but if you want a card of Farmer right now, that’s your only option. There haven’t been any sales in the last three months on Ebay. I paid about $200 for mine in similar shape, but that was quite a few years ago now.