Today’s Pittsburgh Pirates Card of the Day comes from a Heisman trophy winner. Vic Janowicz played for the 1953-54 Pirates. We featured him here once before for his 1954 Topps card. Outside of baseball, he is best known for winning the 1950 Heisman at Ohio State, and playing two years for the Washington Redskins. His timing between playing baseball and playing pro football led to something very interesting in the card collecting world in 1955. Our Card of the Day comes from the 1955 Bowman set. We also have a second card of interest for this article. That one comes from the 1955 Bowman set as well. 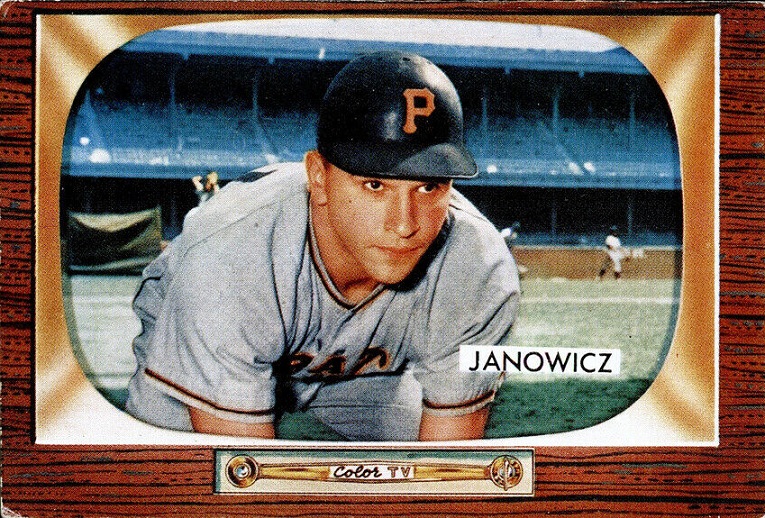 If you don’t like the color TV design from the 1955 Bowman set then you’re probably in the wrong place. These cards still look amazing to this day, but at the time the color TV was first gaining some traction and this set capitalized on that idea. The entire set has the horizontal layout, with just the player’s last name on the front. You have to love the Pirates uniforms from this era as well (it’s required to love it if you’re reading this article). Many of the cards have great background images as well, like the one shown above. 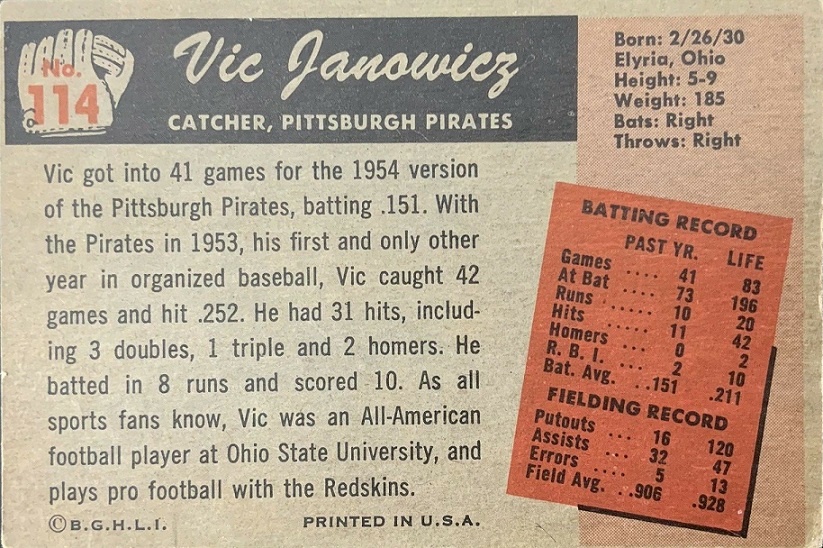 The back gives you the last year of stats and the lifetime stats in 11 categories, including four fielding categories, which didn’t happen often after this set came out. For Janowicz, this happens to be his entire career. As you can see, he wasn’t a big guy, but as you may have guessed for someone who played football and caught in the majors, he was as tough as they come. They called him a catcher on this card, but he actually didn’t do any catching in 1954. You can tell by looking at his fielding stats that something doesn’t look right, with 16 putouts one year and 104 the other, while playing about the same amount of games. It’s because he was playing third base in 1954. The back talks about his football career, yet it leaves off one pretty important detail (hint: it’s the Heisman).

I mentioned that there was a second card of interest from the 1955 Bowman set. Let’s take a look at that one (front only). 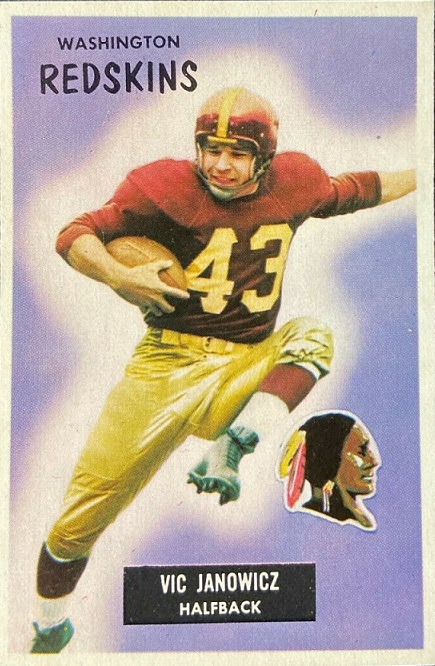 Look at me being tricky. It’s a 1955 Bowman football card featuring Janowicz. I never collected old football cards, though I got some along with a collection I was given as a kid. Not a football fan at all. However, if I bought one football card it would probably be this one. I’d have to get the 1955 Bowman baseball card of Janowicz first, then see if I still wanted the football one for the matching pair.

If you’re interested in the baseball card, that can easily be found on Ebay, with prices ranging from $3 delivered for a low grade example, to $110 (with a best offer option) for an autographed copy. Janowicz passed away 26 years ago, so that affects the price of his autographs. However, there’s also an autographed copy going for $40 on Ebay right now. Full disclosure, there is actually one card going for $115 in high grade, but the card is ungraded (listed as a 7.5 condition) and two PSA 7 examples are for sale for $46 and $55, so I’d go with one of those if you’re looking for high grade. If you just want a nice copy, ungraded, expect to pay about $10.

The football card is tougher to find and it’s slightly more expensive, though you can bargain hunt them for about the same price as his baseball card. You just have fewer options in each grade/price range.