Today’s Card of the Day subject is one of the greatest pitchers in Pittsburgh Pirates history. Some might even call Wilbur Cooper the best pitcher in team history. He is the only pitcher to reach 200 wins with the Pirates, a number that is unlikely to ever be reached again in team history. He was born on February 24th, but he got overshadowed by some guy named Honus Wagner, so Cooper’s Card of the Day spot was pushed back a day. He would be fine with that I assume because he’s already been in this series two previous times, appearing once on his 1920 W516 card, followed by his 1922 Exhibits card. He didn’t have a ton of cards with the Pirates, so our choices for today were limited.

I went with his 1922 W501 card because it was the first good scan of a card (besides his previously used Exhibits) that I found on Ebay. The W501 set is a great set though, and I just picked up two Pirates cards from it as one of my Christmas presents (I guess that’s two presents, but they were bought as a pair). I’m a big fan of the old black and white photos, and I believe it’s a really underappreciated set, as you will see down below in the price section for Cooper. For now, here’s a look at the front of his W501 card.

Here’s the front (the back is blank): 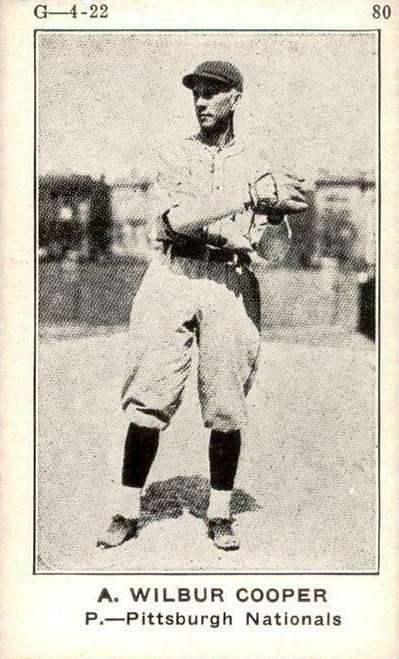 There are a couple of interesting things at the bottom of this card. You’ll notice that it says “A. Wilbur Cooper”. His first name was Arley, which was almost never used in print. A search of newspaper.com came up with less than 50 examples over the years where newspapers used his real first name, and most were after he was done playing. The other thing you’ll notice is that the team name is Pittsburgh Nationals. Since team nicknames weren’t official back then, not everyone went along with it. In fact, this entire set uses just cities and leagues for every team.

These cards came in strips (W is the designation for strip cards) and therefore they were hand-cut. Despite that fact, these cards can still be graded. It’s one instance where trimming cards is acceptable still, as long as the original cut was bigger than the standard size. This particular scan I used looks to be in outstanding shape, but I cropped off some of the rough cut edges.

As I said up top, I’m a big fan of the old black and white photos. This set (and others like it) have some great photos/poses and backgrounds. Cooper’s photo/pose isn’t as good as some of the others, but it’s still great to see a full uniform shot of this Pirates all-time great. Many of his cards are strip cards and they are portrait shots, and they are usually artwork, not real photos.

These cards aren’t easy to find, but in my mind they are surprisingly cheap. Nice Hall of Famers will fetch hefty prices, as will any card of the top tier Hall of Famers. However, this Cooper card shown above (minus the rough cut) went for just $35 delivered. It was the only one on Ebay, but I found a completed sale for a PSA 2 and that one also went for $35. So basically, it will cost you $35 for a copy…unless one in nicer shape comes along, then expect to pay more. This is a set that I suggest people search through because there are some really great poses/photos. You might want to just get a Pirates player as a type card.