Today’s Card of the Day subject is one of the greatest players in baseball history. Honus Wagner was born on this date in 1874. He began his career with the Louisville Colonels before joining the Pittsburgh Pirates prior to the 1900 season. I’m not going to go through his whole history, you can find his detailed bio in our This Date in Pittsburgh Pirates History article from today. His 120.1 WAR just during his time in Pittsburgh is easily the best in team history. He’s so far ahead of Roberto Clemente in second place that he would still hold the top mark without his two best seasons (1905 and 1908) factored in. His 130.8 career WAR is tenth all-time.

Wagner has been featured in this series four times, which isn’t enough for someone of his stature in baseball history. In fact, two of his appearances have been with other players on the card (Clemente and Arky Vaughan) and one of the solo articles featured a card from when he was a coach. The only card from his playing days that I’ve covered here is his 1909 E102 card. Wagner didn’t appear in some of the bigger sets from his era because he didn’t want his name associated with tobacco products. A story told in 1911-12 said that he actually gave a check to a guy whose job it was to get signatures of players because he felt bad that the guy was losing out on his fee to get Wagner to sign. It was a small amount of money, but very generous of Wagner. He famously appeared in the iconic T206 set, with his cards consistently breaking seven-figures now, because only a small amount were printed. That’s the most famous card in the hobby (possibly the 1952 Topps Mickey Mantle is more popular), but I’m saving that card for another day.

Today we look at the E98 set for the first time. It’s not going to be a regular feature here. That’s because there are two Pirates in the set, Fred Clarke and today’s Card of the Day, Honus Wagner. The E is E98 stands for an “early candy” type set. This set was printed in 1910, and while there’s no advertisement on the back, it’s very similar to other sets put out at the same time from the American Caramel Company.

Here is the front of the card: 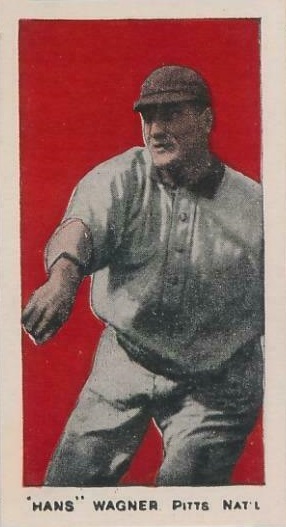 This set used to be much harder to find, but then a huge hidden-away collection of high grade examples called the Black Swamp Find hit the market and changed the population of the set drastically. It didn’t hurt the price though, because the find was so popular and publicized that the set became much more popular and was able to handle in influx of cards. This card has a red background, but it can also be found with a light green background, a blue background and an orange version. Some people try to collect master sets. Instead of going for just one card of all 30 players in the set, they try to get every background variation as well.

An interesting note here has to do with the name. He’s obviously known as Honus Wagner now, but if you do a search of Newspapers.com for “Hans Wagner” and one of “Honus Wagner” during his playing days, you’ll see that Hans was much more common. Something to the tune of about 16:1 usage in favor of Hans. If you search from his coaching days with the Pirates, Honus wins out about 3:1 in usage. So it would actually be a bit odd if the bottom said Honus instead of Hans here. 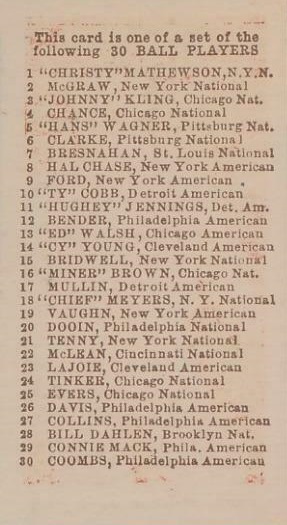 The back here gives you a checklist of the entire set. If you know your baseball history, you know you are seeing star power. There are 16 Hall of Famers up there and it should be 17 to be honest. Bill Dahlen has a better Hall of Fame case than most of the Hall of Famers on that list, but the voters are too stupid to realize that, so he is on the outside still and someone like Derek Jeter, a New York shortstop like Dahlen, with a lower career WAR, gets in on the first ballot and all but one vote. Try explaining that one to someone with common sense.

You might count 17 Hall of Famers there even without Dahlen, but the Cy Young card is actually former Pirates pitcher Irv Young. His nickname was also Cy and he is pictured on the front of the card. It confused someone making the set though, because that same card/pose in another set correctly shows him with Boston (where he was) and then here it shows him with Cleveland, which is where the original Cy Young was playing at the time. His cards do not get (original) Cy Young prices.

If you’re interested in this card, you better have a strong card budget available. The cheapest one is $5,000 and it’s in very poor condition. One sold for $4,000 recently that looked nicer, but it was graded an SGC 1, which is their lowest number grade. Cards can be graded authentic if they were purposely altered in some way.