Exactly one year ago today, Bobby Bonilla appeared in our Card of the Day series for the first time. It was also the first appearance of the 1988 Score set. That was an important set in the baseball card circles because it gave people a fourth choice besides Topps, Fleer and Donruss since the latter two started making full sets in 1981. Not only that, Score used higher quality photos, and the backs of the cards were filled with information on every player, plus they added a second color photo. It made everyone else step up their game, though it was a one-year run at the top for Score because Upper Deck came along and blew everyone out of the water with their card quality.

The is the second appearance for Bonilla in this series and it’s another first as well. We have not used the 1992 Score set here yet. This was not a groundbreaking set. More like  a “Score had settled in to what works for them” set. It was a great time period for baseball cards, and sports cards in general, as they were in a middle of a boom when every kid and many adults collected cards. The 1992 Score set is still a nice offering because it gives you two photos of each player and the large bio section remains. Let’s take a look at card #225 from the 1992 Score set, featuring Pittsburgh Pirates right fielder Bobby Bonilla. 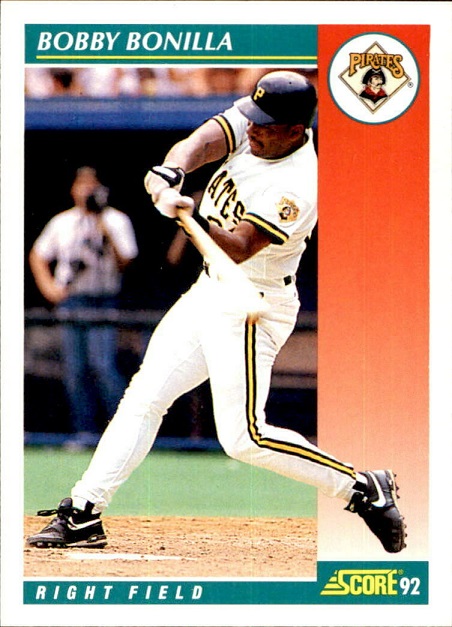 The 1992 Score set does have an interesting attempt at something different, with a partial one-color background, as well as the actual background of the original photo. I don’t know if I’d say that it works, but it is different…sort of. Fleer actually did something very similar that same year, except they just had a bigger border on the right side and the player would occasionally spill into it. Side-by-side, it looks like two options of the same idea, so someone could decide which one they like better. Adding the Pirates logo to the front, especially that logo, is always appreciated. This is a great action shot of Bonilla and you get the uniform from a playoff team in the photo. For some reason it’s amusing to me that the main thing in the background is a blurry photographer, as if the guy who took the photo did that on purpose to one of his competitors. 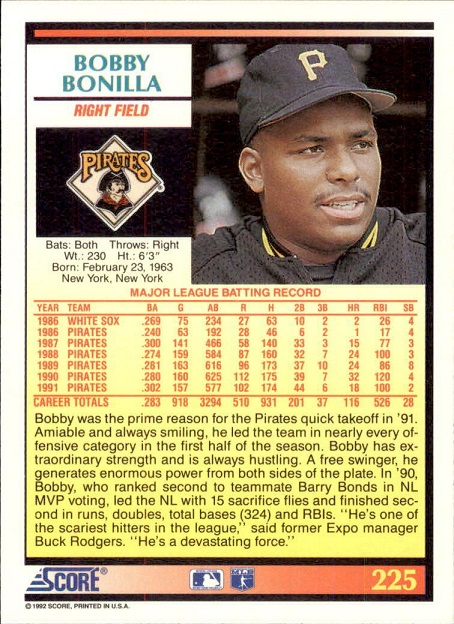 The only thing better than a Pirates logo on the front is Pirates logos on the front AND back. I like the color combos here, works well with the Pirates colors. You get the second photo of Bonilla and it’s completely different from front, with a portrait style photo and the black jersey. Score went with just big league stats here (no minor league stuff), which allowed for a bigger bio section. Bonilla at this time was one of the scariest hitters in the league, a devastating force – Buck Rodgers

This card is a common despite Bonilla being a star at the time. So you can get it for $2 delivered and there are plenty of cards in that range on Ebay. No reason to pay more than $3 for this card. There are three autographed options on Ebay right now, and they range from $8 to $11. I’ll not that Bonilla has an awful looking autograph. It’s just a giant BO with dots in the circles of each letter. I have no idea why there are two dots. I can’t even explain where the “i” went for the first dot (it would be a “tittle” not a dot if the i actually existed). Happy collecting!