Today is the third time that I have used Orlando Merced in the Card of the Day series, but it has been a year since his last appearance. In fact, it’s been exactly a year. That’s because today is the anniversary of the day he signed with the Pittsburgh Pirates as an 18-year-old out of Puerto Rico. That was four years before Puerto Rico became part of the Major League draft. That last article can be found here, and it pictures Merced wearing a throwback jersey, sporting the 1925 jerseys, to help celebrate the Pirates second World Series title that year. Today’s card comes from the 1992 set, and it features the regular jersey from that year, but that jersey had a patch that helps you identify the year. So here’s a look at card #637 from the 1992 Topps set, featuring Orlando Merced. 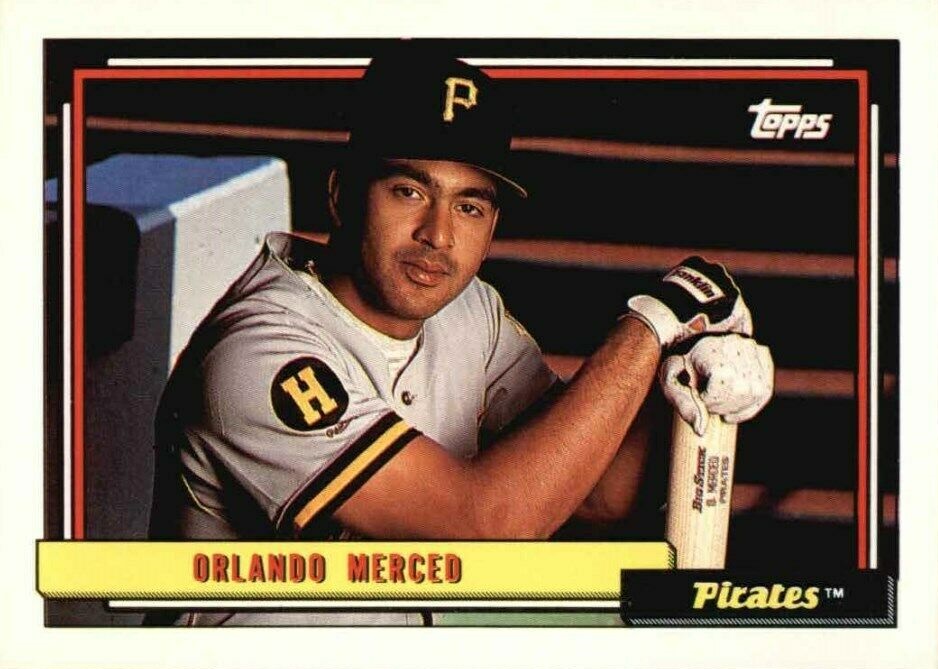 Two things you probably notice right away here. This card has a horizontal layout, which is not common for the 1992 set (or almost every Topps set ever made). Also, the patch on his right sleep really stands out, with the gold “H” in a black circle. That patch was put there for long-time Pirates equipment manager John Hallahan, who passed away on September 11, 1991. The team put a patch on the jersey at the end of the season in his honor. Hallahan, who was 64 at the time, was in his 50th season with the Pirates. He began his career as a bat boy in 1941, working for $1 per game.

I like the 1992 design because Topps decided to use team colors, although I would have went with black write for his name. Obviously the yellow/gold colors don’t match up exactly (you can see the big difference where his sleeve is close to his name), but it’s close enough that it works. Merced did a good job here facing the bat label towards the camera. This photo was taken fairly early in his big league career, so he was still probably a little excited about having his name and a big league team written on his bats. 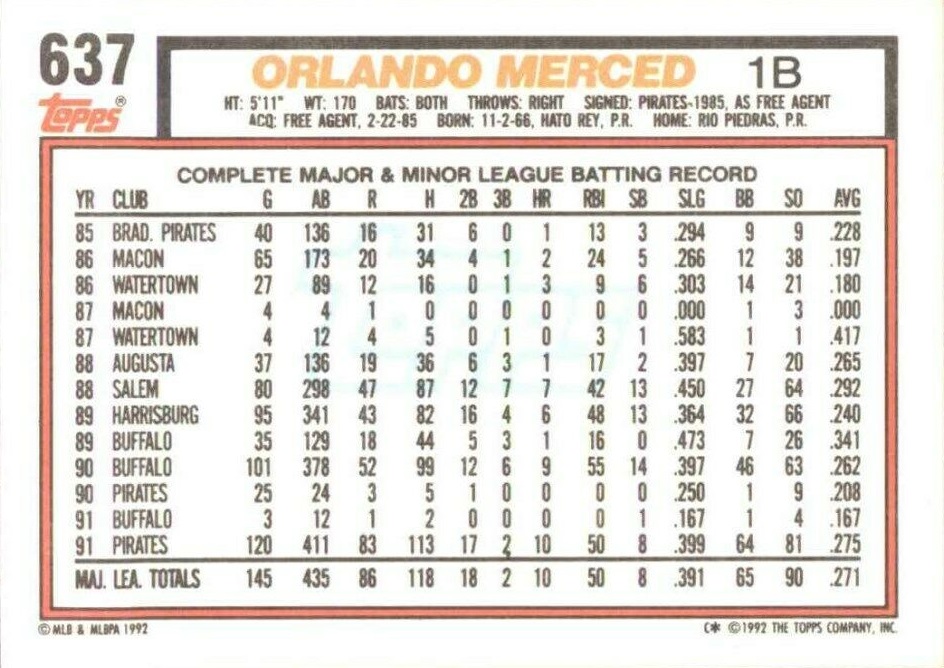 I’m a fan of the 1992 backs, mostly because black writing on a white background is easier to read, especially when the player has a lot of lines of stats like Merced here. Obviously some players have more, he just bounced around a lot in the minors, but he was only seven seasons into his pro career at the time. One thing all of those minor league lines of stats did here is eliminate the photo of Three Rivers Stadium that some Pirates cards have at the bottom. A nice hidden gem here is that Topps logo in the middle of the back, which can be tough to see if you don’t focus on that section looking for it.

This card is a common and all Ebay laws regarding common cards apply here (You can get it for $2 delivered), but that doesn’t mean there isn’t anything else to mention. There are two autographed copies available, both going for $9.99 with a best offer option and free shipping. Surprisingly, they are not from the same seller. There’s also a tougher to find Gold Winner version, but it doesn’t look tougher to find going by Ebay numbers. That’s because someone is more likely to list a Gold Winner common player than an individual listing for a common card. Being tougher to find doesn’t add to the price though, and I saw a couple for $2 delivered.