Yesterday was the birthday of Pittsburgh Pirates great, Elroy Face. I used Frankie Gustine for the Card of the Day subject to get him a little more attention for spending ten years with the Pirates. I knew I used Face here multiple times in the past, so it made it easier to use someone else. Today’s Pittsburgh Pirates History article didn’t have any good card options to use today, so I decided to feature Face instead. What I didn’t realize is that he only had one solo article in the past, when I used his 1953 Topps rookie card on August 31st to mark the anniversary of the date he was sold to the Detroit Tigers in 1968. I didn’t ignore him all of that time. He was here on a card with Hall of Fame reliever Hoyt Wilhelm from the 1960 Topps set. He was also here on a 1959 Topps card with Ron Kline, Vern Law and Bob Friend titled Buc Hill Aces. However, one solo card feature in almost two full years isn’t enough for one of the great pitchers in team history.

I had plenty of options for this article subject today, but I decided to go with the 1963 Fleer card because I like the look and because I’ve only used the set once here before, and it was over a year ago. It’s also something different from the usual Topps cards I have to use for players from the 1960’s-1970’s, because almost nothing else was printed during that time. So here’s a look at card #57 from the 1963 Fleer set, featuring the Baron of the Bullpen, Elroy Face. 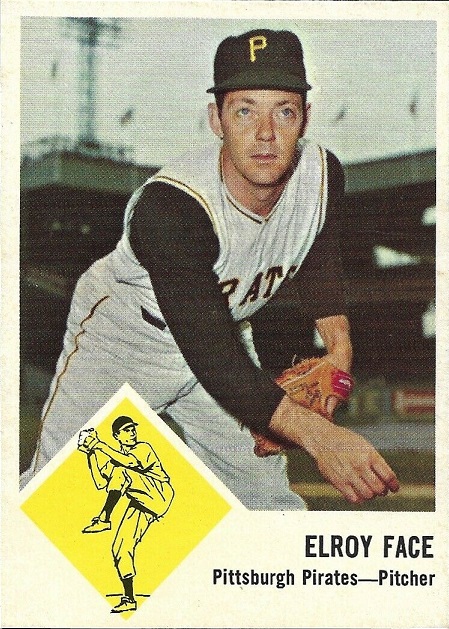 It seems like we have talked about the standard pitcher follow-through photo quite a few times recently. I guess you can only do so much with photos without straying from a baseball theme, but there are so many cards that look just like this pose. I’m a fan of the 1963 Fleer design, even though it’s rather simple except for the cartoon player that goes along with each position. They used the standard white border, black print. Sometimes simple just works though. I think part of what sells it for me is seeing the old uniforms from that era. That might mean that I wouldn’t have liked it as much if I grew up during that time, but those uniforms from back then, especially for the Pirates, are great looking now. 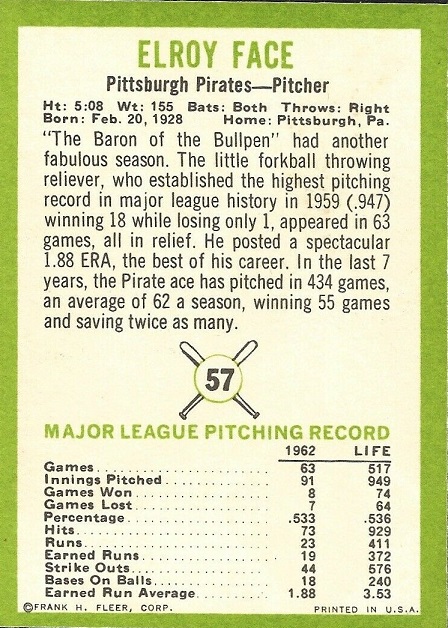 The backs of the 1963 Fleer cards have one year of stats and lifetime stats only, taking up most of the room with a short bio section on the player. What is interesting on this card is the last line of that bio, where it says that he has won 55 games in the last seven years and saved twice as many. Many of you know that the save wasn’t an official stat until 1968, so it’s interesting to see it mentioned here five years earlier. Some sources list Kent Tekulve as the Pirates all-time leader in saves, but it doesn’t seem wrong to retroactively award saves if the player’s performance fits the criteria. He was still getting the save, they just didn’t have a name for it. Some MLB stats posted online from various sources also do that with RBIs and ERA because they haven’t been official for the entire time stats have been kept and it’s annoying because you’re just putting names and numbers along with something that already happened. The first perfect game happened in 1880, but no one called it a perfect game back then, yet it doesn’t mean that it didn’t happen.

You now want to know the price of these cards, so you can go pick one up. They aren’t rare, so you’ll have no trouble finding one in your preferred grade and price range. There are 47 auctions for this card currently live. The best copy on Ebay right now is a PSA 7 that the seller is asking $33 for delivered. One ungraded card is said to be a 7.5 by the seller, but the price is double the PSA 7 price and there’s no guarantee that the card would get that grade, which is besides the fact that grading fees aren’t cheap. There are three autographed copies and the prices are $25, $37 and $60. The cheapest copy is $6, and there are five auctions under $10 delivered. The interesting thing about that low price is that six auctions have ended for under $6 in the last three months out of 13 total sales. The most expensive one sold was a rare PSA 9 copy that went for $175.