Today’s Card of the Day is the first appearances in this series for Frankie Gustine, who was born on this date in 1920, and he played infield for the 1939-48 Pittsburgh Pirates. At times during his ten seasons in Pittsburgh, he held the starting spot at third, shortstop and second base. He isn’t well known in team history, but he ranks 21st all-time for the Pirates in games played (1,176). He’s also 21st in both at-bats and plate appearances.

Due to timing, he doesn’t have many card options for the Pirates. There were almost no cards at all printed during the war years due to paper drives, and half of his time with the Pirates was from that era. There weren’t a lot of cards printed during his other years with the team either. The 1941 sets would have been his best bet, but he didn’t make the Play Ball or the Double Play sets from those year. I almost used his 1949 Bowman card because the front shows him with the Pirates, but he was already a member of the Chicago Cubs by then, which is indicated on the back. I’ll probably use that at some point, but I found something better to use today, and it has a Cubs connection as well. Today we look at two cards, and they are both from the 1947-66 Exhibits set.

Here’s our main card for today: 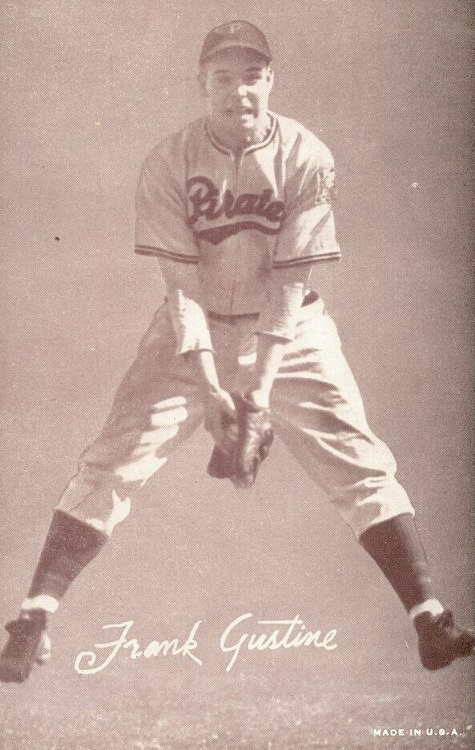 That is quite the interesting photo of Gustine to say the least. The really interesting thing here  is that this card came out in 1947 at the earliest, but that photo is from the 1939 season. That patch on his left sleeve is celebrating the 100th anniversary of baseball (part of the Abner Doubleday myth). Even if I didn’t recognize that patch, the uniform style you see there was last worn in 1939, which was Gustine’s rookie season with the team. He actually didn’t debut until September 13th that year.

Gustine tried to enlist in the Army shortly after the war started, but he failed the physical due to a hernia, so he was able to play the entire time through the war years, which didn’t happen for a lot of players. Besides the fact that some players (who didn’t serve) just retired for a time due to wartime jobs, you also have the normal attrition due to age/poor results/injuries, etc. He had the perfect timing though, establishing himself in the majors just prior to the war. The only other players to be with the Pirates from 1941 through 1946 were Al Lopez and Rip Sewell.

Here’s the second card (the backs of both cards are blank): 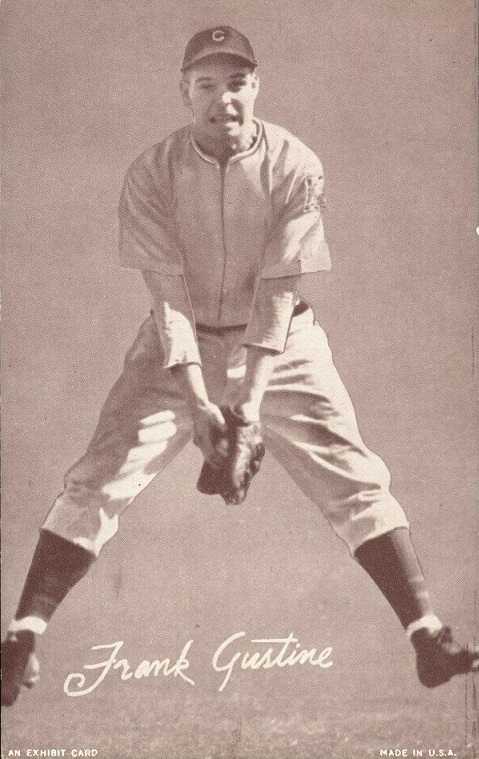 As you can see, this is the exact same photo as the card above. The difference being that the bottom photo has some airbrush work done to it. The reasoning behind it is that he was traded by the Pirates to the Cubs in December of 1948, so they reissued the same card to acknowledge the transaction. Interestingly enough, they left the 100-year patch on the sleeve. The only other difference is small and in the bottom left corner, where they added “an Exhibit card”, which was the company that produced the cards over many years.

A look on Ebay for prices shows that there are four of the Pirates version available and seven of the Cubs version. There are two Pirates and two Cubs among the four sold auctions over the last three months. From that small sample size, it appears that the Cubs card is easier to find, but it’s too small of a group to be certain. The completed auctions for both versions ended between $7 and $17 delivered. The current auctions range in price from $11.50 to $350. That top price is for a high grade copy, but well over the price of any previous sale. That’s also for a Cubs version, with the highest priced Pirates copy going for $205. That’s a bit nicer on the wallet, but still a very high price. There enough options in the lower range that you should be able to find one to suit your budget.