Today’s Card of the Day is the second appearance in this series for AJ Burnett, and it’s the second time that he’s appearing here on February 19th. That date has a little more significance than last year, just because people enjoy anniversaries that end in “5” or “0” more. Today is the tenth anniversary of the date that the Pittsburgh Pirates traded for AJ Burnett, bringing him over from the New York Yankees in a deal for two prospects who didn’t pan out, making it a one-sided deal for the Pirates.

Last time Burnett was here, we used his 2013 Topps Archives card, which utilized the front design of the 1982 Topps set. Today’s card is quite a bit different because it’s not a throwback design, and because it features more than just Burnett on the card. You get three other Pirates as well, maybe 3 1/2 or four, depending on how you want to count it. It’s card #343 from the 2015 Topps Update set, showing AJ Burnett and friends. 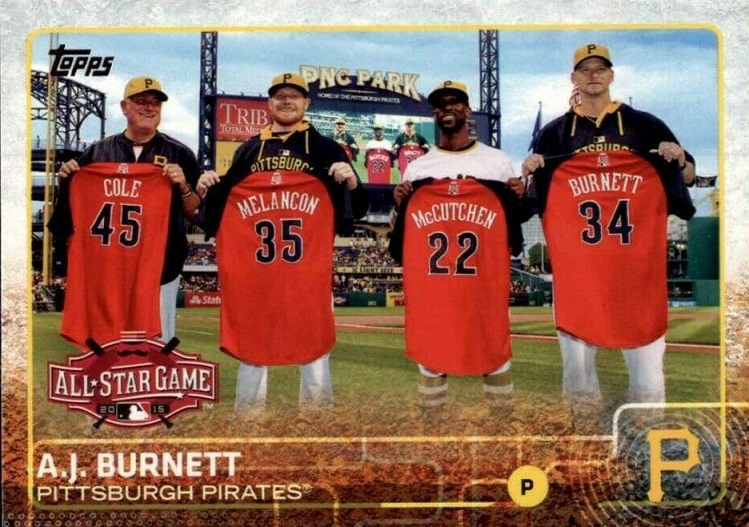 This is an AJ Burnett card, but it could be called a Pirates All-Star card. Here’s where the three, 3 1/2 or four other players came into play. Yes that’s Burnett holding his All-Star jersey, and Andrew McCutchen is holding his jersey, while next to him is Mark Melancon holding his own jersey. You’re eyes aren’t deceiving you though, that’s manager Clint Hurdle holding up the jersey of Gerrit Cole. If I had to guess, I’d say that this photo was from July 10, 2015, three days after the rosters were announced, when Gerrit Cole was the starting pitcher at PNC Park. I would assume that’s why he isn’t there holding up his own jersey during the pregame photo session. He would have been in the bullpen getting ready for the game. Seems like the most likely explanation, and that day was his only start between the All-Star announcement and the actual All-Star game.

The 2015 Topps design is one of the strangest ones ever. Random lines veering off in different directions, the Pirates logo is an epicenter for an earthquake, and why are there so many little circles on the bottom left? I have no idea what they were going for here. It’s like they allowed a bot to design a card based off of every other card made. I do like that All-Star logo from 2015 in Cincinnati. Definitely has that vintage baseball feel. 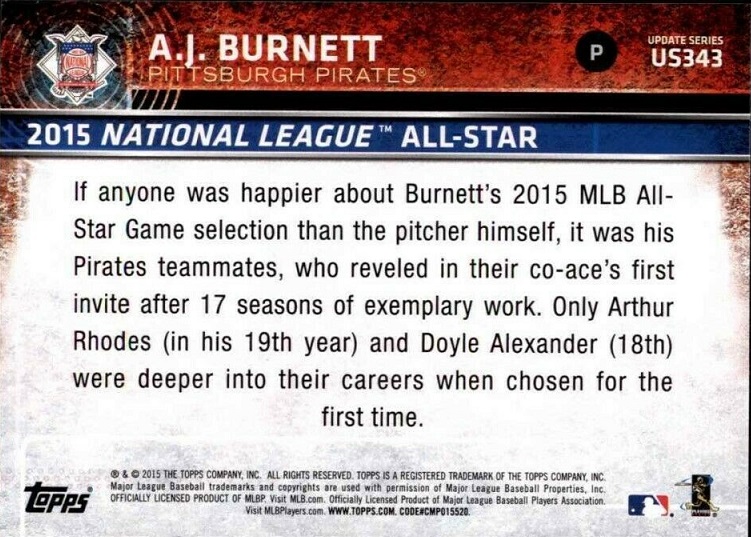 The backs a little more calm than the front, but they still have the epicenter logo effect for the National League logo. As you can see, the back doesn’t have any stats. It focuses on Burnett making the All-Star team. That’s an interesting fact that I didn’t remember off-hand about waiting to make an All-Star appearance. That made me interested in how well those players did that season compared to previous ones in their career. Was it their best season, or just a matter of things eventually lining up in their favor? Here are the details.

For Doyle Alexander, his 18th season was 1988, and it was a decent effort with a lot of innings, but not even close to his best work. He finished 1988 with 0.3 WAR, which makes it his 13th best season up to that point. He had plenty of years that warranted All-Star appearances, but he was lucky to make it when he did.

For Arthur Rhodes, he was a reliever, so the WAR bar is set a little lower. He had 1.6 WAR in his All-Star season in 2010, which is well up there for his career. However, it was only his sixth best season up to that point.

That brings us to Burnett. The 2015 season was his final season, though that was clearly by choice and not due to performance. That year was tied for his fourth best season, equaling his 2.6 WAR from the 2012 season when he joined the Pirates. He probably should have made it in 2009 when he had 4.5 WAR, which was his best season.

If you’re interested in this card, it is plentiful on Ebay and it can be had for $2 delivered as well. There are a few variations of note currently listed and none of them are pricey. There’s one called a snow camo that is numbered to 99 copies and one person has one for $4.99 or best offer, which is a nice deal for a tough card, and the front design looks MUCH better. There’s a gold version as well, with nine copies on Ebay and one of them is actually under $2 delivered, which is another nice price for a tougher (than the base) card. Then there’s a variation that doesn’t have the All-Star logo, but otherwise looks the same. I’m not sure why you would want that when it’s the best part of the front design. The lowest variation auction is $5 delivered.