Today’s Card of the Day comes from a player who hasn’t been featured here yet, and a set that I almost used yesterday for Nelson Briles, another first-time player. Just like Briles, Bob Miller was a member of the 1971 Pittsburgh Pirates pitching staff. Miller wasn’t around as long as Briles, joining the Pirates in an August 10, 1971 trade with the San Diego Padres for Ed Acosta and Johnny Jeter. It was a trade that worked out well for the Pirates, who got a nice playoff push from Miller, while neither player they gave up had much value after the deal.

Miller was only around until March of 1973, so I didn’t have many options for his card today, at least not ones showing him on the Pirates. He played 17 years in the majors, so he had plenty of cards over the years. The choices were 1972, 1973 Topps and a 1973 O-Pee-Chee card, and I just used the O-Pee-Chee set yesterday, so it’s a bit too soon to feature Topps’ Canadian cousin again. I went with the 1973 Topps card because I liked the background of the photo. Seeing as he was released before the 1973 season started, many Pirates fans were getting this card in packs after the team already parted ways with him. We will still look at it anyway, as today’s featured card is #277 in the 1973 Topps set, depicting veteran right-handed pitcher Bob Miller. 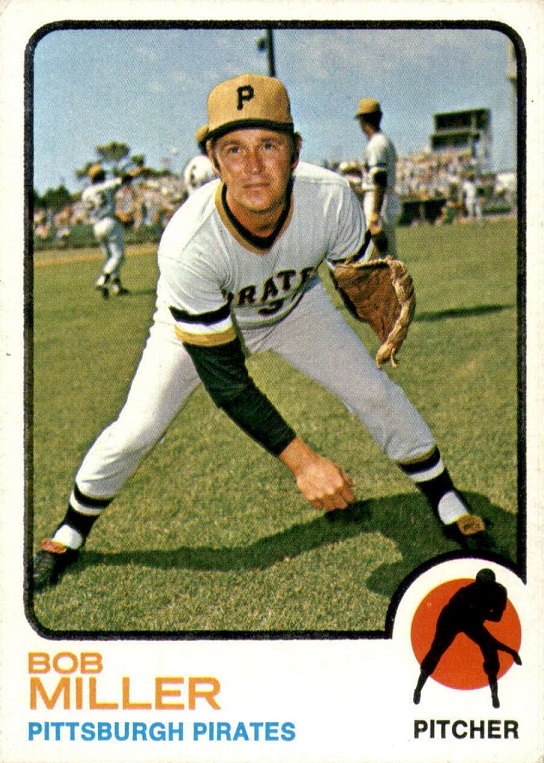 I mentioned in yesterday’s article that Briles was pictured in the pitching follow-through pose that Topps used literally over 1,000 times. I still haven’t counted to see if that “literally” was correct, but here’s another example of the famous Topps pitching pose. In fact, the shadowy figure in the bottom right is in the same exact pose. While that’s sort of a coincidence since Topps used generic figures in that spot depending on the player’s position (in this case, it’s right-handed pitchers), they used this pose for their cards so often that it’s not really a coincidence when it probably happened around 50 times in the set.

I didn’t pick this card because of the matching pose/shadow though, I picked it because of the background. Usually the photos from back then are on the sidelines and you don’t see anyone else in the photo, but this card has an entire baseball scene in the background. It looks like Rennie Stennett is right over his right shoulder, but no one wore #53 during the 1972 season, and this photo was obviously taken them because there was no other time that Topps could have taken a Spring Training photo of him. There was no #53 from the 1971 team who could have possibly worn the number during the following spring. No coaches were wearing the number either. Don’t know who it is, but it is still cool to see the scene in the background of the photo. 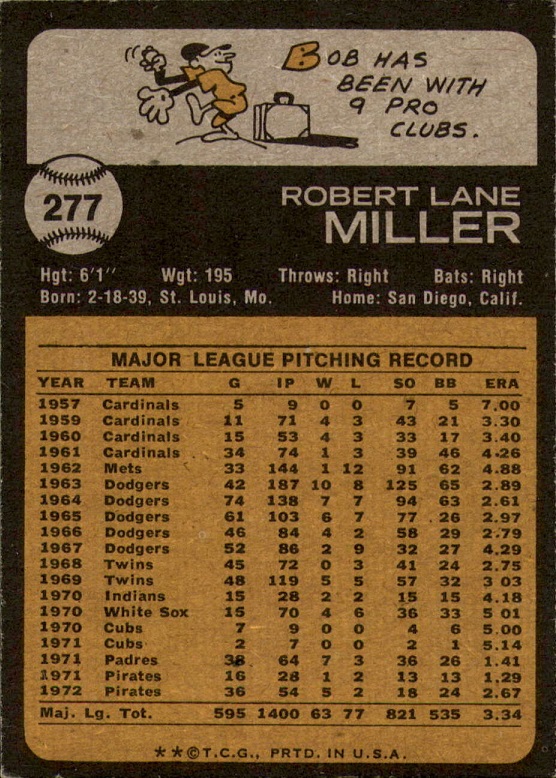 I have no idea why Topps chose to have generic gray man for every player, but I’m surprised he got the job with that oddly shaped right arm, where his elbow is about two inches away from his wrist. As you can see, Miller was a veteran before joining the Pirates, and he lasted two more years in the majors, finishing with 3.37 ERA in 694 appearances and 1,551.1 innings pitched. Here’s an interesting note about the stats there. As you can see, Topps only used whole inning totals. Miller actually had 1,399.2 innings pitched at this time, but the whole inning totals equal up to 1,400 there. What they did for the innings total is round up if it came up to two outs extra and rounded down for one out extra, so 99.1 would be 99 and 99.2 would be 100. I never really thought about that until I saw the nice round 1,400 number there in the career stats.

If you want this card immediately, just calm down for a second, because I’m almost done. Also, this card is plentiful on Ebay, so no need to rush. There were 116 active auctions when I wrote this article up a few days before it got delivered to your front doorstep.  The most expensive auction is a PSA 9 for $43 delivered. There was a PSA 9 auction still active but ending before this article goes to print (no buy it now option), so you might want to check to see what that ended at before spending $43. There are some really nice ungraded options under $10 (also nice ones for more than $10 if you hate bargains). You can get one for around $2 delivered from numerous sellers if you just want a presentable copy. There were no active signed copies, but one recently ended for $15, so that’s a starter price range for you.