Today’s the third time in a short time that I’m using a World Series team to decide the Card of the Day subject. About two weeks ago, we used Bob Skinner here for the first time (a shocking oversight). Then I’m sure most of you can remember back a day for the article featuring the Lefty Leifield Sweet Caporal Domino Disc. Today is another first time subject, and another that I was a bit surprised about not having here during the first 23 months of this series. In all three instances, the This Date in Pittsburgh Pirates History article didn’t provide a good subject for a card, so I pulled up a World Series winning roster and picked the best player who hasn’t been featured here yet. After using the 1960 and 1909 teams, today’s team was the 1971 club, and the player is pitcher Nelson Briles, who finished tied for ninth with 2.3 WAR.

Briles played for the 1971-73 Pirates, so his options for cards were limited to the 1972-74 sets, though I had five options for those three years. You might be wondering how I picked this particular card, well I’ll tell you. I sent my mom a text that said “no questions asked, pick 1972, 1973 or 1974” and she picked 1974 without asking any questions. My original method was just checking to see how often I’ve used the Topps sets from those years and all of them have appeared 5+ times. It didn’t even cross my mind to use Topps’ Canadian cousin until a did an Ebay search for 1974 Nelson Briles. That search also brought up another card which I decided to share because everyone loves a good 1970’s Topps airbrush job. So here’s a look at the 1974 O-Pee-Chee Nelson Briles, along with a special tag-along card for fun. 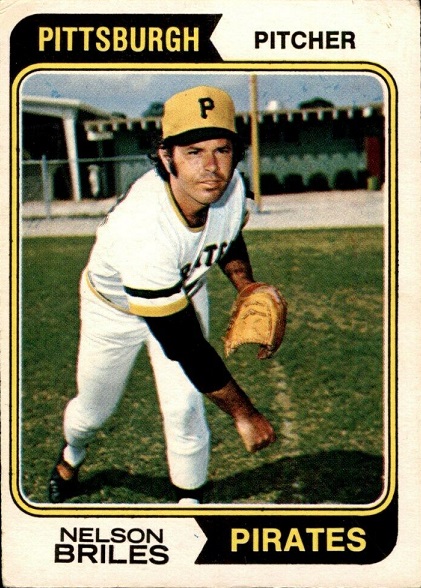 This could easily pass for a scan of a 1974 Topps card. In hand, the best way to tell the difference is just by turning the card over. Just for fun, let’s say you have a phobia of turning cards over without knowing if it’s a Topps or O-Pee-Chee card. The one way to tell the difference in most cases is that the O-Pee-Chee cards have fuzzy borders, meaning they don’t always have clean cuts, so they literally look fuzzy.

I love the use of team colors on the fronts of cards from this year. While it’s not my favorite set from the 1970s (they started off strong with the 1970-71 designs), it is in that second tier with the 1976 set. They started using some actual game photos in 1973, but Briles still has the traditional pitching follow-through pose that you can literally find on over 1,000 Topps cards (I said literally, but I didn’t count and I’m just hoping no one else does either). You get a nice old shot of Pirate City here in the background. 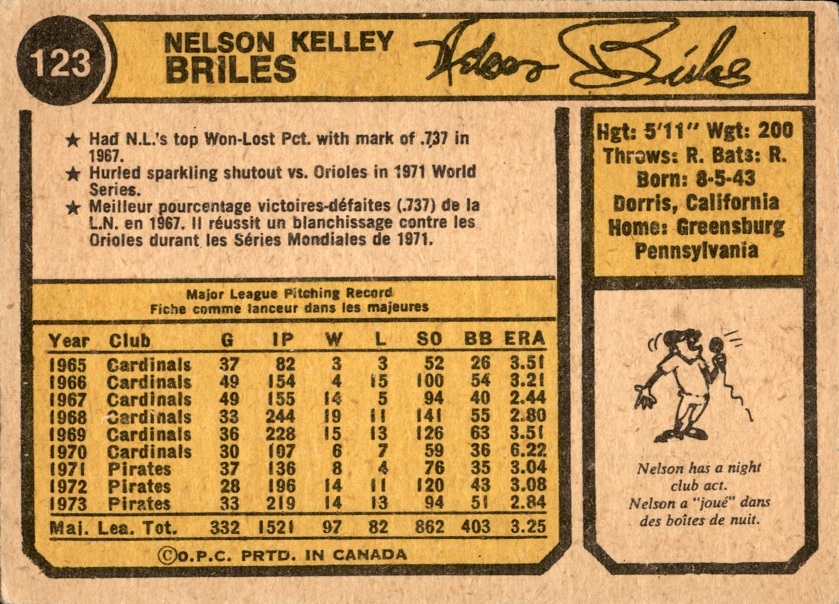 The back has three dead giveaways that this isn’t a Topps card, though the most obvious at first glance isn’t obvious if you’ve never seen the back of a 1974 Topps card for comparison. The 1974 back uses a dark gray background and everything that is goldish/yellow here is dark green on that card. The second most obvious is the second language on the back, which obviously doesn’t happen on Topps cards. The third giveaway would be that little “Prtd in Canada” part, where the word printed is abbreviated for no apparent reason. Plenty of room for those other three letters…or is it ltrs?

Okay, I mentioned that there was a special second card here and I couldn’t pass up using a scan of his 1974 Topps Traded card. As I mentioned up top, Briles played for the 1971-73 Pirates. On December 4, 1973, he was traded to the Kansas City Royals. That was too late to make changes to the 1974 set, but Topps issued a Traded set later in the year and Briles got a card. What Topps didn’t do was take a new photo of Briles, so we got this amazing airbrush job…. 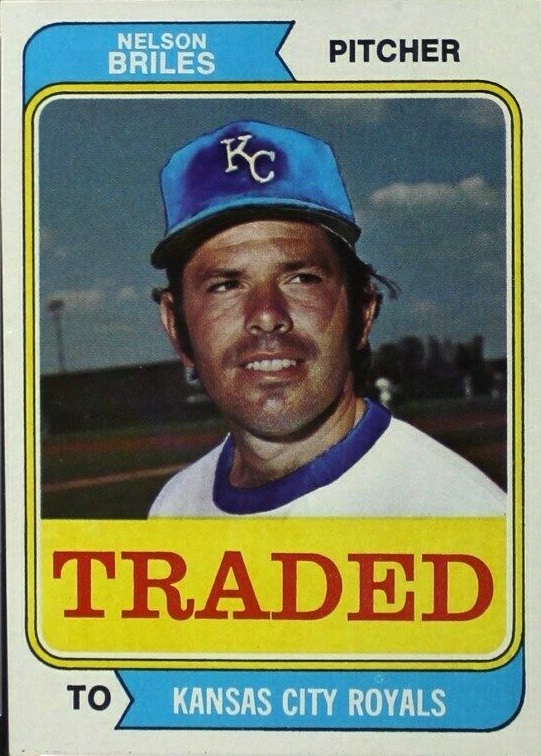 Behold the airbrush glory that is this card! They created (by hand) a Royals hat and changed his collar color, while using the “TRADED” logo to block out the team name on the jersey. Amazing.

If you’re interested in the O-Pee-Chee card, there are three available on the Ebays. The prices are $6, $8 and $10. If you don’t care about the team and you now want the nicest copy of that Traded card, you can get a PSA 9 for $88. Briles apparently signed a lot of cards, so you can get either Topps card autographed for $20 or less. The regular Topps card mid-grade (but ungraded) can be had for $2 delivered, while the harder-to-find Traded card has plenty of options in the $3-$4 range.