Today’s Pittsburgh Pirates History article included six former Pirates born on this date. In the title, I noted that it was a very obscure group, based mostly on the fact that they played a total of 51 games with the Pirates. Here’s a fun fact for this Card of the Day article: None of them had cards with the Pirates. I found a transaction of note listed from 1933, only to find out that it was wrong when I researched the deal, and neither player involved had a Pirates card anyway. So I went to a method that seemed to work well not long ago when I realized that Bob Skinner had never been used as a subject here. I went to a World Series winning team and found the guy with the most value that season who had yet to be used in this Card of the Day series.

I went to the Baseball-Reference page for the 1909 Pirates. Started at the top as far as WAR for the season and got down to Lefty Leifield before I found a player (he was 13th with 0.9 WAR). This is a bit amazing to me that I haven’t featured him here yet because he has one of my all-time favorite cards as far as looks go. That’s wrong of me to say in this article because I want to save that card for when I can get a scan of my own card instead of pulling a scan. So instead I decided to go with a set that we haven’t looked at here yet, and it’s not really a card at all, but it gets lumped into the card category because it was easier than having separate checklists and guides for random items, such as this one… 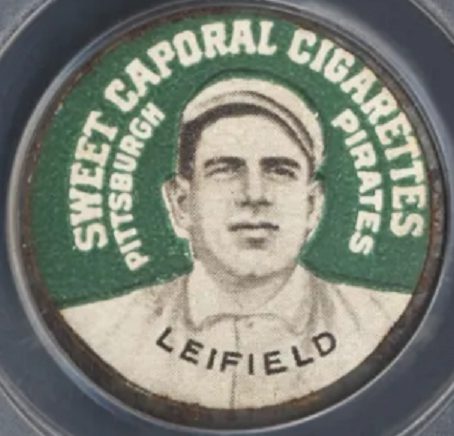 Clearly that isn’t a card. It’s similar to some pins put out around that time, but this is actually a metal disc put out to help advertise the Sweet Caporal cigarette brand. You don’t see the name Pirates on many cards from this era. As you know by now from reading out history site every day, the name Pirates was just a nickname back then, so most sets went with “Pittsburgh/Pittsburg (depending on the year) followed by NL or National. All of the discs in this set had portrait style poses. These are small collectibles, measuring approximately 1-1/8” in diameter.  Some hats got team logos or color, some didn’t. Some players got their first name, most didn’t. 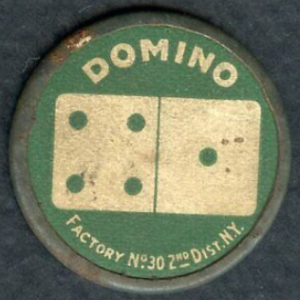 Here’s where the name Domino Disc part of the title comes in. The backs of these discs have pictures of a domino on them and those dominoes have different values on there like a real set of dominoes. As you can imagine, it was meant to be a game, so there aren’t a lot of high grade examples out there from this set. The section on each side with the images is cardboard, while the outer rim in metal. A check of scans on Ebay to get a good back image (I didn’t use the same front/back here) shows a lot of discs with rust. I actually chose a scan with a little hint of rust on purpose to show you what you could expect with this set, which has 129 different players.

If you realized while reading this that a lot of kids probably collected these and it has a prominent cigarette ad on front, you would be correct. However, that wasn’t uncommon back then. Without tobacco companies issuing cards/discs etc., the population of pre-WWI cards would be about 1/10th of the current size. My two favorite sets from back then, the T206 and Old Judge sets, are the biggest sets from back then and they (mostly T206) make up a significant percentage of pre-WWI cards still in existence.

If you’re interested in adding the Leifield disc to your collection, one from Ebay will cost you $80 and it’s in rough shape. I’d suggest waiting, because one ended for $40 recently that looked nicer, while another one was up as an auction when I wrote this up a few days before you’re reading it and it had no bids at $34. It’s possible that one gets relisted and is up now. If so, $34 is a good price.