Today’s Card of the Day article is a little bit different, as if you couldn’t tell by the title. Today is Russell Martin’s 39th birthday. He was a wildly popular member of the 2013-14 Pittsburgh Pirates, helping them to two straight playoff appearances before leaving via free agency. That ended up working out just fine for both sides, as he got $82M from the Toronto Blue Jays for five years, and the Pirates won 98 games in 2015. He put up 9.8 WAR in two seasons with Pittsburgh and a total of 8.8 WAR during that five-year contract. The Pirates had interest in signing him, but it would have turned out poorly if they ended up spending that much. The most ironic part is that they got Francisco Cervelli instead and he put up 8.8 WAR during that same time-frame for about $35.5M. Sure, they traded Justin Wilson, but he wasn’t worth the $46.5M difference for the exact same production. Pirates were happy, Martin was definitely happy, and who cares about the feelings of the Blue Jays.

As you can see in the title, I’m using cards from both of his years with the Pirates. I’m not trying to make up for ignoring him in this series. I’ve already featured him here once before, which not coincidentally was one year ago today. That day I used a throwback design set, looking at his 2013 Allen & Ginter card. The reason I’m using two cards today is because the 2013 Topps Chrome and 2014 Topps set used almost identical pictures of Martin. In fact, as I was scrolling through the tiny thumbnail photos on Ebay, just looking for something that caught my eye, I thought I was seeing a lot of the same card. When I slowed down, I realized it was two different cards with the same exact idea. Let’s get into the two cards. Just so this article doesn’t get too long, I’m just looking at the fronts today. 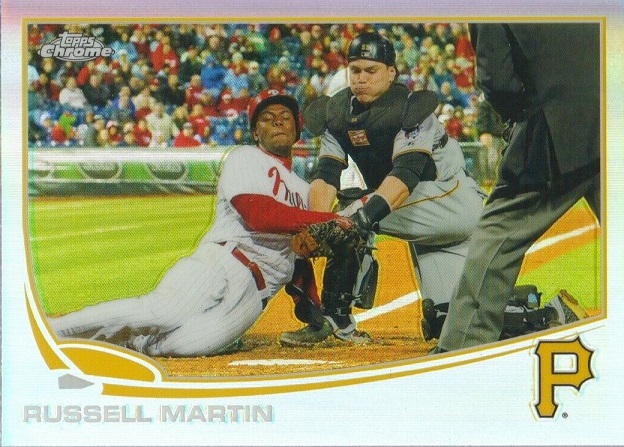 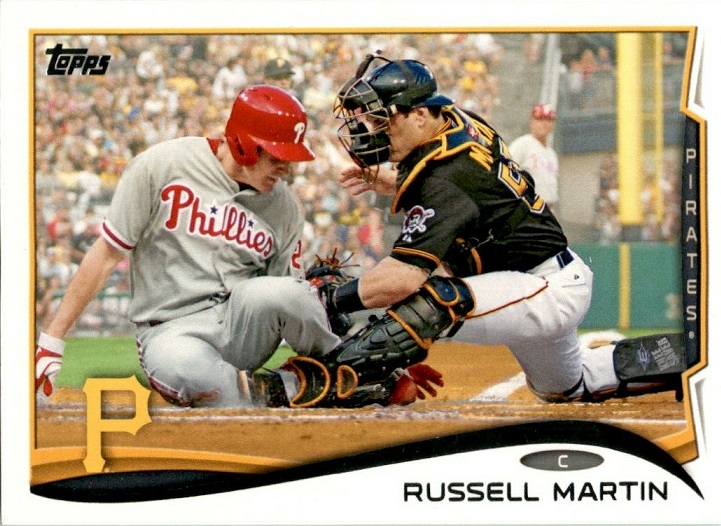 What’s amazing about their choices here is that these photos obviously didn’t happen on the same day. Twice Topps had photographers in the same spot at Pirates/Phillies games, once in Philadelphia and once in Pittsburgh, and both of them came up with what looks like tagging players out at the plate. I don’t see the ball in either photo, so I’m just assuming that it is in his glove on both plays. I don’t have to assume though, as the internet is a magical place that helps us figure out what happened nine years ago just by having a photo from that day.

The photo on the 2013 card is John Mayberry Jr getting tagged out in the fourth inning of a 2-0 Pirates victory on April 23, 2013. I’m not really assuming here because once I figured out who it is, I Googled “John Mayberry Phillies Pirates” and this play came up with an article about that game. It wasn’t the exact same photo, but it was extremely close, a slightly different angle, and about a tenth of a second earlier.

I didn’t try to figure out the player on the 2014 card. Instead, I scrolled through Baseball-Reference, with only three Phillies games in Pittsburgh from 2013 to check, and I found a play from July 3rd that said pitcher John Lannan was thrown out at home plate. Clicked on Lannan’s page, saw he wore #27, then Googled “John Lannan Phillies Pirates” (all I actually did was change Mayberry to Lannan) and found photos showing the play just as you see up top.

There you have it, both players were out on the play. It actually took me longer to type up the results than it did to find the plays and check them. Topps took these photos just over two months apart from each other, then used them in different years in different sets. I guess it’s understandable, considering that they are both great action photos. The fact that they don’t do a lot of horizontal layout photos and he got one in each set is interesting to note. Also, they really didn’t switch up the design much between these two sets, so it’s no wonder that as I was quickly scrolling through small photos, I didn’t notice that it was two different cards right away.

If you’re interested in these cards, just know that each one comes with many different variations with border colors and limited issued cards. You can get the regular version of the 2013 card that you see above for $2-$3 delivered, or there are versions in various prices from $3-$15 called Xfractor, Blue Refractor, Sepia, Gold, Orange, Black and Purple. There are also six other versions, but none are currently on Ebay right now. The 2014 card is just from the regular Topps set and it can be found for $2 delivered. That one also has other versions that range in price from $21 for an Access Pass Redemption First Edition, down to $4 for a red foil version, with many options in between.