It’s been almost a year since we have featured the 1951 Bowman set here. We first looked at the set over a year ago when we covered Murry Dickson’s card. Last March we checked out the only card of Pete Reiser on the Pittsburgh Pirates. So you can say that we are overdue to feature this great set. Bowman was living the life in 1951. They were the big game in town until some youngster named Topps stepped onto their turf. Topps actually put out a small set in 1951 that is extremely hard to find, but they really made their mark with their 1952 set, which has some iconic card, including the Mickey Mantle card that is so popular that people call it his rookie card, despite Bowman including him in their 1951 set.

As for today’s subject, Pete Castiglione, he had four cards while with the Pirates. We already checked out his 1950 Bowman card here. That left his 1951 and 1952 Bowman cards, as well as his 1952 Topps. What’s interesting about that limited selection is that he spent all of 1952 with the Pirates, and he was with the team for the first two months of the 1953 season, yet he doesn’t appear in a 1953 set. As I alluded to up top, I chose the 1951 Bowman for today because it’s been a while since we looked at a card from that set. 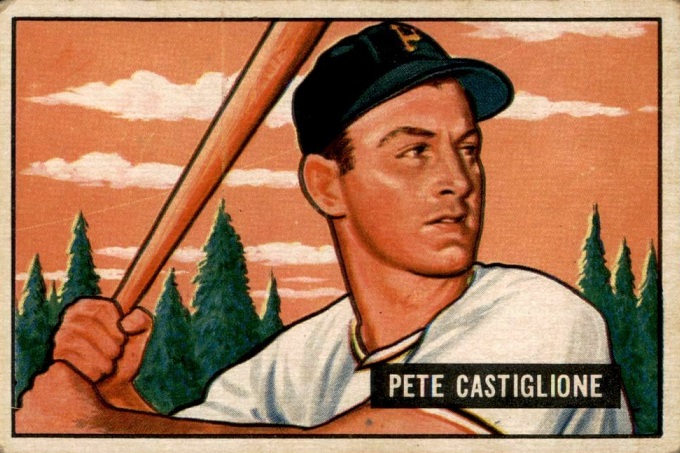 That background there is quite interesting. He was apparently in the forest for this photo, and honestly his photo looks like he could be a bit overheated, so maybe he’s lost and about to take a swing at a bear that tried to take his picnic basket. It’s just an odd looking background for a baseball card. 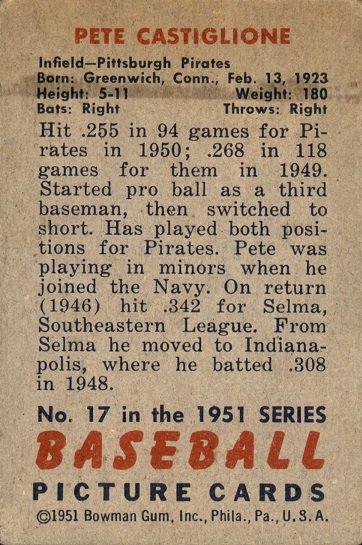 As you can see in the photo, the back uses the normal vertical layout that you find on every single card in the set. They didn’t switch up the backs for the horizontal layouts. What’s interesting about this card is that it appears to show that Castiglione was born 99 years ago today, but he was actually born on this date in 1921. Players lied about their age often back in the day to help their case with signing. Sometimes they added years so teams would sign them earlier, but often they claimed to be younger so teams wouldn’t write them off due to their age. I’m not sure what the deal is here, but Castiglione was in the low minors at 25 years old, so maybe he figured saying he was 23 made him seem more age appropriate for the league.

This card is fairly common on Ebay with 56 active auctions at the time of this write-up. It also trades fairly well, with 18 sold auctions in the last three months. Two of the more interesting sales are someone getting an absolute steal for $1.80 delivered on one the seller graded VG/EX. The other is a PSA 5 that sold for $37. As for the active auctions, if you just want a decent ungraded copy, you can pick them up in the $8-$10 range, or a little lower if you’re not big on condition. The highest priced one is $90 for an authenticated autographed copy. There are a few other autographed copies as well, one in well loved condition, but it’s authenticated and $35. There’s an SGC 84 (PSA 7) for $45, with a best offer option. That’s a good price compared to the PSA 5.