In July of 2009, the Pittsburgh Pirates traded first baseman Adam LaRoche to the Boston Red Sox for minor league pitcher Hunter Strickland and minor league shortstop Argenis Diaz. The latter was in Double-A at the time, but the Pirates bumped him right up to Triple-A. By April of 2010, the 23-year-old Diaz made his big league debut. By December of 2010, the Pirates let him go via free agency. In 2011, Topps featured Argenis Diaz, as a member of the Pirates, as one of four players on their Rookie Parade-Infielders card. The timing of the printing of this set had to be in early December at the very latest, because Diaz was a free agent for just 18 days before he signed with the Detroit Tigers on December 20th. So Pirates fans were left with an unfortunate representation in the Topps Heritage set, someone who received just 36 plate appearances in the majors, and he wasn’t even with the team anymore when people started ripping open these packs. Here’s a look at the card and a quick look at the other three players also pictured, as we look to see how Topps did with their picks. 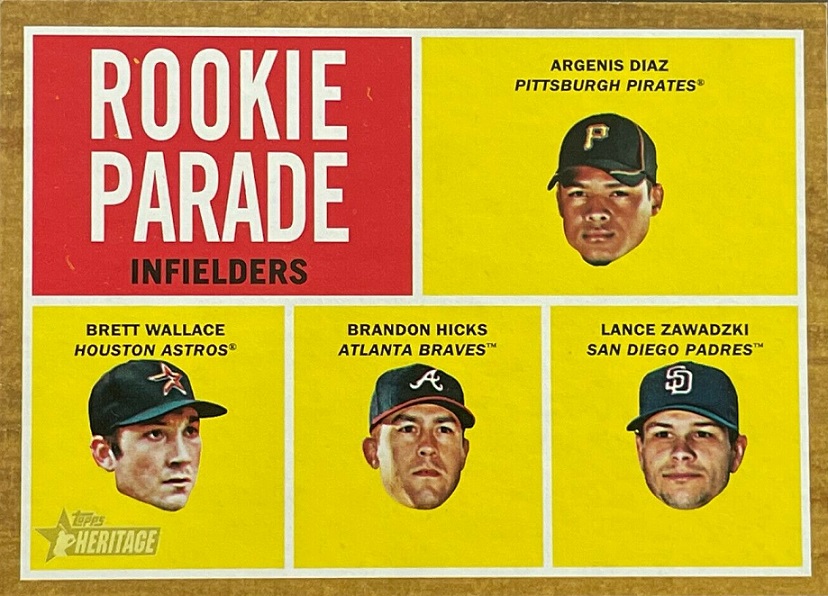 As you might be able to tell, the Heritage design for 2011 was taken from the 1962 set. One of the odd decisions they made was using the look of sets from 49 years earlier, which they are still doing to this day. They also used the floating head idea, which was popular back in the day, but has always looked odd to me. It doesn’t say it on the card, so I’m not sure if it was done on purpose, but all of the players here are National League players. This was still two years before the Houston Astros moved to the American League. I’ll get to the players once we see the back. 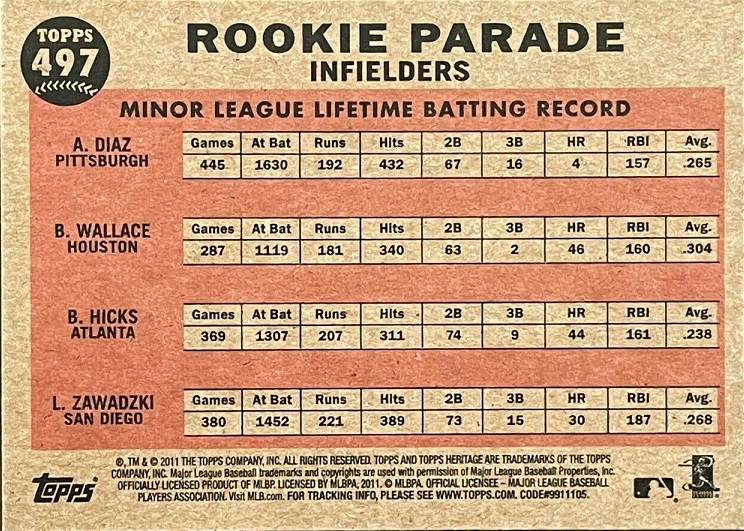 The backs here gave a little help as far as trying to figure out the best prospect in this group, but there are some things that would have helped more, such as age, draft/signing status, and of course stats can be taken so many ways based on age, strengths of the league and level of play. You would assume by looking at the stats that Brett Wallace is the best prospect, but without any other information, he could have been a college senior beating up on low level pitchers much younger than him, while Lance Zawadzki may have been a high school kid who got pushed quickly through the system. Basically, stats only tell a partial story here, so let’s look into the real story.

Diaz we can do quickly, since you can read about him in today’s history article, plus the quick summary I posted up top really tells you everything important. His stats there show you that he wasn’t a power hitter, but he also wasn’t a high OBP or speed guy either. He was a glove-first player, who spent a lot of time in Triple-A, but his big league time was already over by the time this card was released.

Brett Wallace was a first round pick and one of the top prospects in baseball prior to the 2009 and 2010 seasons. However, he wasn’t a top prospect going into 2011 because he wasn’t a rookie, so I’m not sure how he ended up on this card. He only spent one full season in the majors and it was his last year in 2016. He got released at the end of Spring Training in 2017 and never played again. He batted .238/.316/.389 in 494 games, finishing with -0.2 WAR, getting knocked that low due to poor defense.

Brandon Hicks saw very limited time in 2010 with the Atlanta Braves, getting six plate appearances in 16 games. He saw slightly more time in both 2011 and 2012, spent all of 2013 in the minors, then played 71 games for the San Francisco Giants in 2014, which was his last season in the majors. In 126 games, he hit .153, with a .568 OPS. He was a third round pick, who showed some power in the minors, but always with a low average/OBP. He finished with a .754 OPS in the minors, and that was with five seasons in the hitter-friendly Pacific Coast League.

Lance Zawadzki has a story very similar to Diaz. He had 42 plate appearances in 2010 for the San Diego Padres, and then never played in the majors again. He had a .607 OPS in the minors at 24 years old in 2010, playing in two hitter-friendly parks. He played another seven seasons after his final big league game, so you have to give him some credit for that perseverance.

I can usually figure out what Topps was thinking with prospect selections, but these were some bland choices and none of them worked out. Sure, Wallace was a top prospect at one point, but he wasn’t a rookie, so why is he on a rookie card? The other three seemed to just be three guys who played in the majors, so they put them on a card together. You don’t see too many of cards like these where half of the players already saw their big league career come to an end. It’s almost like they weren’t looking for prospects, just getting players on their first card without giving them an individual card.

This is still a cool card because of the throwback design, so many you want to pick one up and add it to your collection. This card does not follow the rules of common cards on Ebay because it was short-printed, so it is tough to find. There are only four currently on Ebay and three of them are over $10 delivered. The other one is an auction style listing and it will have ended by the time you read this article. Right now it has no bids at $1.88 delivered, so I might actually try to win it. If I think about it, I’ll post an update in the comments.