On this date in 1928, the Pittsburgh Pirates picked up Hall of Fame pitcher Burleigh Grimes in a one-for-one deal for pitcher Vic Aldridge. I wanted to do a Card of the Day for Aldridge because he won 15 games for both the 1925 and 1927 Pirates, helping both teams to the World Series, yet he seems to be most recognized in team history for being part of this trade that was extremely one-sided. He was out of the majors before the 1928 season could end due to poor results, while Grimes put up numbers that you would expect from a Hall of Fame pitcher, compiling 11.2 WAR in two seasons before he was traded away. Like I said, I wanted to use Aldridge here, but I couldn’t find good scans of a card that showed him on the Pirates, so I’ll have to try again next time his name comes up in the history article.

Grimes is a nice substitute considering that he won 270 games in his career and he had three stints with the Pirates, including the start and end of his career, plus the great two-year run in 1928-29. He’s only been featured here once before, mostly because he doesn’t have many card options with the Pirates. In fact, the set which I was trying to find scans of Aldridge in, is the same set I ended up using for Grimes. In the mid-1990s, The Sporting News and Megacards put out a great collection of cards that utilized the photos of Charles Conlon, the famous baseball photographer. It’s a huge set, released over multiple years, and we have used it here before because it includes some players who have no other cards available. One little subset included in 1995 was “Nicknames”, featuring nine famous nicknames that were on cards #1382 through #1390 in the set. The first card in that subset is Burleigh Grimes, and it’s our Card of the Day. 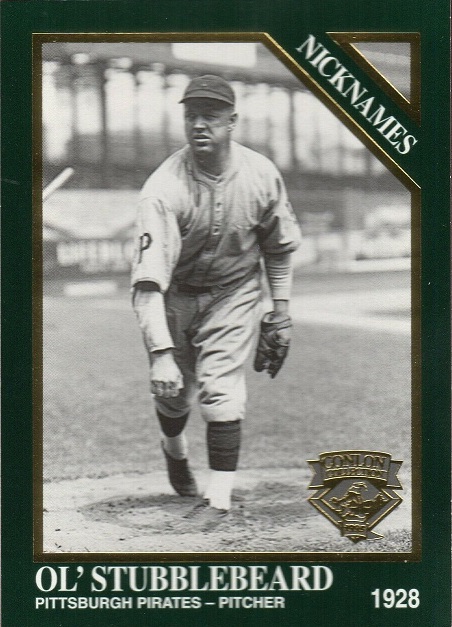 Every other card that we have used here from the Conlon set features a card with a black border, and it’s missing the gold foil you see here. The card has the same look though, a great old black & white photo, with the team name, position and the year of the photo at the bottom. The difference here is that instead of his name, it has his nickname “Ol’ Stubblebeard”. I could explain the nickname here, but that would ruin the back of the card. So get a good look at the uniform here again and then we can move on to the other side of the card. For reference, the team used white uniforms at home, gray on the road. The hats were dark blue with a red P, the P on the jersey was dark blue, and the the stripes you see down below the knee are red and dark blue, with the red being the lighter color in the photo. 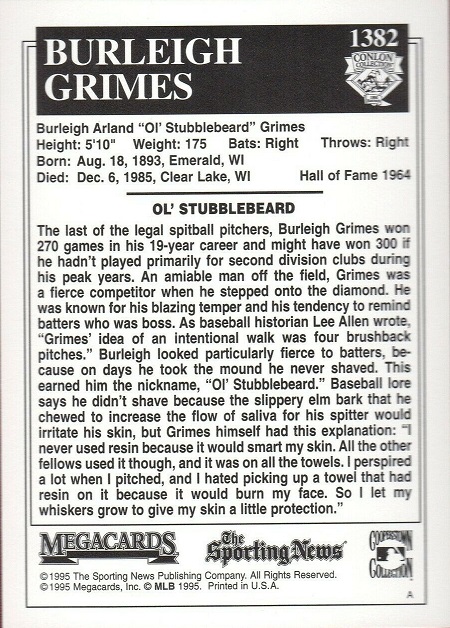 As you can see, the back here tells a great story of how he got the nickname, so we can talk about another part of his story. Grimes was the last of the legal spitball pitchers, one of his claims to fame, besides that whole Cooperstown thing. He had to be part of a list put out before February of 1920 that grandfathered a small group of spitball pitchers into the rules that banned the pitch. He had just four seasons in at the big league level at the time, and he still had 236 wins ahead of him in his career before he retired following the 1934 season. Retired is a little incorrect because he pitched in the low level of the minors in 1935 as a player-manager before hanging them up. Imagine someone recent like Greg Maddux just deciding after his final year that he wanted to play a season of Low-A ball before he was done.

If you’re interested in this card, it’s surprisingly hard to find. Just one is on Ebay right now and the price is $7.50 delivered. A site called COMC, which specializes in selling single cards, has two of these for sale, and the price is $3.42 each, but they usually have one of the higher shipping changes on Ebay, so I assume it’s the same on their own site. This might just be one you put on your wantlist if you want it for a decent price. Happy collecting!