This is a card I should have featured here long ago because I’ve made mention of it in the past. The 1922 E120 American Caramel set is 100 years old this year, so I didn’t want to wait too long before including it in an article. I’ve featured it here twice in the past, but there are still some great Pittsburgh Pirates cards in the set for us to look at in the future (and today too, I guess). Today’s Card of the Day depicts infielder Cotton Tierney, who played for the 1920-23 Pirates before being traded away to the Philadelphia Phillies in a major trade during the middle of the 1923 season. He had quite a quick peak during his time in Pittsburgh, but they dealt him away at the right time, and his big league career was over by the end of the 1925 season. The 1922 season was his best, and he was captured on this great card before the season started. 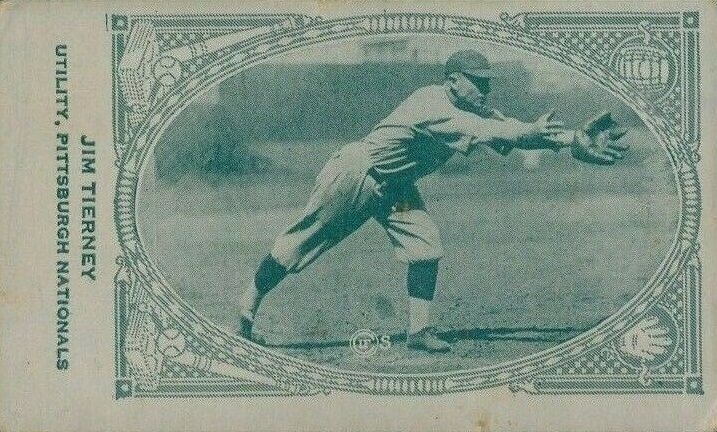 The E120 set is known for some great action shots and the frequent use of horizontal photos to get the full shots onto the card. One of the popular poses is the player leaning with an outstretched glove. Some show them going for grounders, but Tierney is here stretching for the catch. The front design looks like an early video game design, but it was made in the 1920s, so there’s a decent amount of artwork there. Much better looking that just the plain white borders surrounding a photo box, which many sets have from back then. Two things to notice on the front here and then I’ll get into more detail about them after we see the back. Notice that he’s called “Jim” here, which most of you assumed correctly that it’s his first name (technically, James). The other thing is the team name being “Pittsburgh Nationals”. Both interesting details… 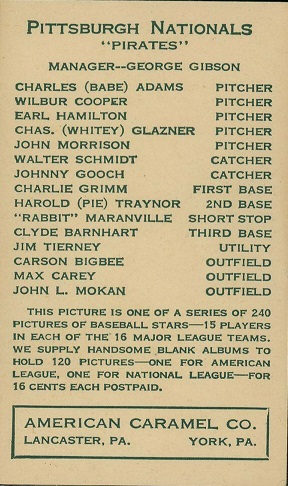 Before I get into those two notes, I’ll mention that this back isn’t the same exact card as the front. There was only one E120 Tierney on Ebay (see prices below) and that one had stains on the back that would have taken away from the visual appeal. As for the notes, you’ll see that the back is a checklist and they wrote Pittsburgh Nationals “Pirates”. The Nationals there is to say that they were part of the National League, not a different nickname for the team. Despite how many times I’ve mentioned it, you’ll still read people writing that the Pirates name became official in 1891. That’s not only false in that they were rarely referred to by the local media/fans as the Pirates until 1895 (they were called the Braves for about 21 months from mid-1893 through early 1895), and then they actually took on the name Patriots for the 1898 season, but they didn’t have an official nickname until well after the 1891 season. The word “Pirates” didn’t even appear on their uniforms until 1912, and those iconic PBC logos you see from the 1909 World Series champs came from the team’s actual name, the Pittsburgh Baseball Club. So the fact that you see “Pirates” in quotations there just shows you that they were referencing the common nickname.

The other fact has to do with the checklist, and the name “Jim Tierney” on the back. I have been writing history on Pirates Prospects since 2010, and I got that gig back then because I had already amassed a number of history articles on the team prior to that point. When I was in first grade, we had a library class where we were told to bring home one book and read it that week. Almost four months in, the teacher asked me to pick something else besides baseball. I think I did for one week, then ended up checking out the Pittsburgh Pirates history book for about 3-4 more times over the rest of the year. I was also allowed to bring home the full baseball encyclopedia one weekend, which wasn’t supposed to be checked out of the library. I read it the entire weekend from what I remember, knowing that I probably wouldn’t be able to take it out again.

I tell you all of that not to brag obviously (it would be a very odd brag), but to say that I’ve known about Jim Tierney for a very long time and I’ve written about him a lot over the years. That didn’t stop me about two years ago from doing a triple take and thinking about it for about two minutes before I linked “Jim Tierney” on the back of this card to Cotton Tierney. It must be the name Jim, because the first two similar examples that came into my head just now were Jim Hunter and Jim Grant. Those names don’t automatically ring a bell to me, but I can tell you way too much about Catfish Hunter and Mudcat Grant if you asked.

As for the pricing, your one choice as of this writing is graded an SGC 2 and it’s going for $125. You can probably get this card cheaper if you wait for it, especially in an auction-style listing, but I don’t know how long that wait will be, other than to say there hasn’t been another on Ebay in the last three months. Your other option is a reprint card that can be had for $7 delivered, or the whole team set is listed for $24. That too can probably be had cheaper if you want to wait.