Today’s Card of the Day comes from the 1981 Fleer set, the first big set put out by Fleer once Topps lost their stranglehold on the baseball card game. In 1981, Fleer and Donruss provided the first legitimate full set of cards of current players that wasn’t done by Topps since Bowman produced their last full set in 1955. The only real attempt at a large set during this time was the 1976 SSPC set, which had 630 cards, but they didn’t have an agreement with MLB or the MLBPA to use player/team images, so their cards were only printed in small numbers before they were stopped from printing more. Topps basically had a 25-year run as the only game in town until 1981. In that first full set by Fleer, card #384 featured Pittsburgh Pirates pitcher Eddie Solomon.

Solomon was featured in this series in one of our earliest articles, shown on a 1982 Topps Pirates Team Leaders card with Bill Madlock. This interesting thing about that card is that Topps used his nickname on the front, identifying him as Buddy Solomon. I also featured him in a solo article, taking a look at his 1981 Donruss card, which has a great action shot from Wrigley Field. Not coincidentally, that article was posted one year ago today. That’s because Solomon was born 71 years ago today. So here’s a look at his 1981 Fleer card. 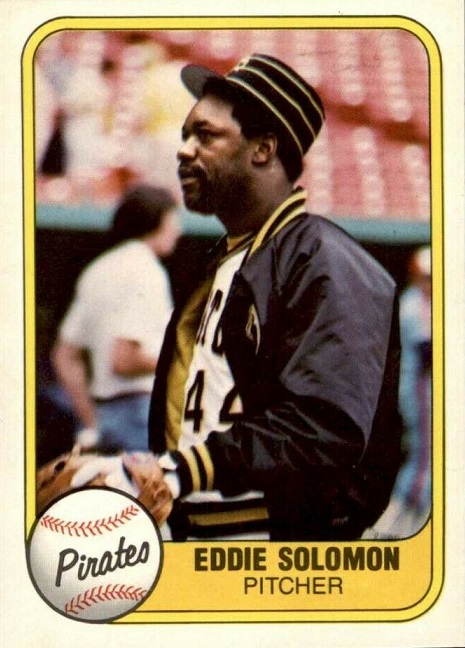 Fleer sort of matched up the front with the colors of the team. It looks like they did a great job of it here with the Pirates, but that section with the name/position is gold/black for all of the cards in the set. The matching up part is the yellow border around the photo. That’s different colors on other teams, such as the Los Angeles Dodgers getting blue in that border or the Philadelphia Phillies getting red. The team name in the baseball was also catered to each team. I looked through a number of cards from the set and only the San Francisco Giants had black writing in the baseball as well. I’m not sure if I saw every team, but I saw a lot.

My favorite part about the Pirates cards here is that you get a bunch of different uniform looks. It was the mix-and-match era and Fleer took photos of the Pirates players over multiple days, so there are a few different combos. 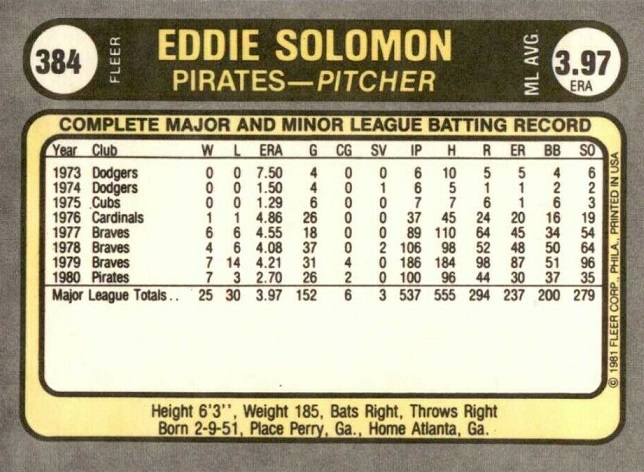 Fleer did a nice job on the backs of these cards. It’s a nice color choice and it’s easy to read. They got all of his big league stats. It would have been nice to have his minor league stats as well, but that would have added 13 lines at this point in his career, as he moved around a little in the minors, plus he started back in 1969. He also didn’t spend a full season in the majors until 1978, so those first five seasons in the majors would all have at least one added line. The only category of stats that Fleer didn’t have compared to Topps was shutouts, otherwise the two had the same stats across the board, only in a slightly different order.

If you’ve followed this series for a while, then you know we end with the price section, and as you may have guessed, this is a common card and all Ebay laws regarding common cards apply here. You can find this card for around $2 delivered from multiple sellers, just make sure to check shipping changes before hitting that buy it now button, because some people charge shipping on common cards like they don’t want to sell any. The only auction of note here is the one autographed copy. The price is $45, which might sound high, but Solomon sadly passed away at 34 years old in 1986 in a car accident, so he’s a tough autograph to find. The auction does have a best offer option in case you’re interested in getting a signed copy. There are a total of nine Solomon autographed cards on Ebay, but most show him on the Braves.