Gene Clines, who played for the 1970-74 Pittsburgh Pirates, recently passed away at the age of 75. While looking for a photo of him, his 1973 Topps card was one of the first pictures to pop up and I decided to add it to the upcoming articles, which became the article you’re reading right now. Clines has been featured here twice already, once for his rookie card with Fred Cambria from the 1971 Topps set, and then again for his 1990 Pacific card when he played in the Senior Professional Baseball League. No doubt Clines will appear here again in the future, but I didn’t want to wait until his birthday in October to feature him again. So here’s a look at card #333 from the 1973 Topps set, featuring Pirates outfielder Gene Clines. 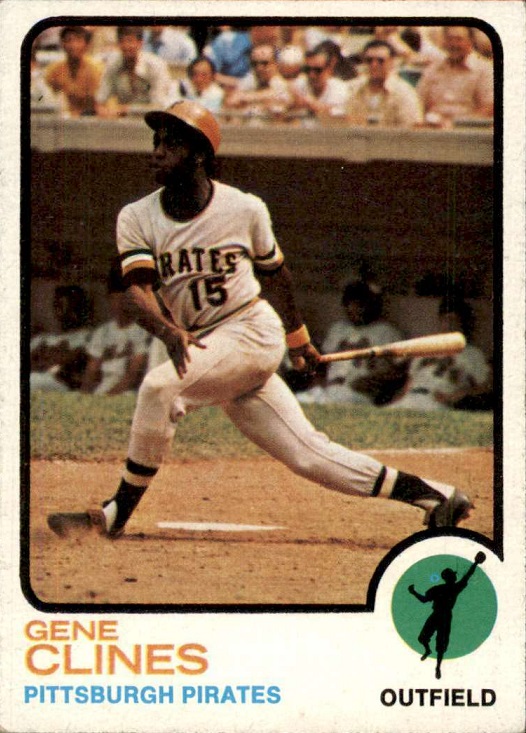 The 1973 Topps set is their first year featuring more action photos. Instead of just having a separate subset called “In Action” cards, they went for more photos on the regular cards that showed players in game action. It was a great idea that was both good and bad. There were a lot of great looking action shots, but also a lot of those shots were poor quality photos. The Clines card is the middle ground. Not the best quality photo of him, but far from the worst in the set. However, it’s a great in-game action shot. My guess is that he just lined a double to the gap, and that’s based on nothing other than why not guess something positive happened here. That’s a great looking uniform there, especially with the gold batting helmet and wristband adding some color there to the photo. I like that you can see his uniform number on the top of his front shoe.

I’m not a huge fan of the 1973 Topps front design, but I do like the look of the set because of the action photos mixed in and there are some great old school uniforms from that era. Of course the Pirates uniforms are great, but mixed in with the classic looks that never change like the Detroit Tigers, you also have those “what were they thinking” San Diego Padres uniforms with the yellow and brown, looking like a banana that’s just starting to go bad. 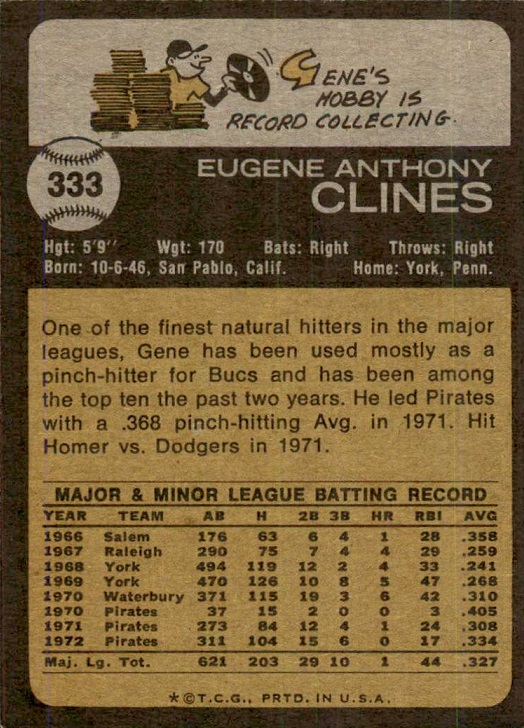 The back had enough room here for all of his pro stats at the time, plus the layout allowed a brief section of notes. Clines had some strong stats in the majors up to this point, carrying a .327 average through his first three years with the Pirates. The color selection here almost makes the Padres uniforms look good. The cards also had the cartoon at the top featuring the ever popular generic gray Topps man, who looks like nobody ever who played baseball.

If you’re interested in this card, you’ll be happy to know that it’s one of those cards that you can find for $2 delivered. Clines was also a generous signer, so you can find multiple examples in the $6-$20 range, and unlike 99% of current players, he has a great signature. There were actually more, but a few of them sold on the day that he passed away. There are three PSA 8 copies of this card on Ebay right now and the cheapest one is just $23 delivered, and it has a best offer option as well.