Today’s Card of the Day comes from the terrific looking 1968 Topps set and it features pitcher Juan Pizarro, who was a member of the 1967-68 Pittsburgh Pirates, as well as the 1974 Pirates. He was born on this date in 1937 in Puerto Rico. Pizarro ranks second among all pitchers born in Puerto Rico in wins with 131, which was a record until he was surpassed by Javier Vazquez. Pizarro holds the country’s record for seasons by a pitcher with 18, the same amount of years put in by Roberto Clemente.

Pizarro had just two cards with the Pirates, unless you include the Venezuelan version of his 1967 and 1968 Topps cards. I went with the 1968 Topps set because I like it better. I will get to his 1967 card at some point, which has some added intrigue due to the fact that it’s from the high number series. For now, let’s take a look at his 1968 Topps card, #19 in the set. 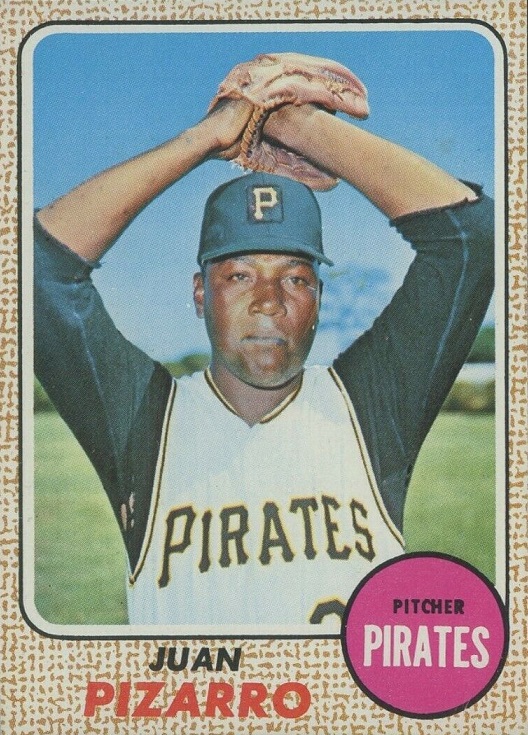 I actually pulled this scan from a PSA 10 that is on Ebay, though I cropped the picture a little due to a slight tilt in the photo, but you’re looking at a 54-year-old card that is basically perfect condition, better than some were when they were pack fresh. What isn’t in perfect condition is that shirt. Look at the left side of the card and you’ll see what I’m talking about. All of the airbrushing that they used to do on these cards and they couldn’t help him out here? 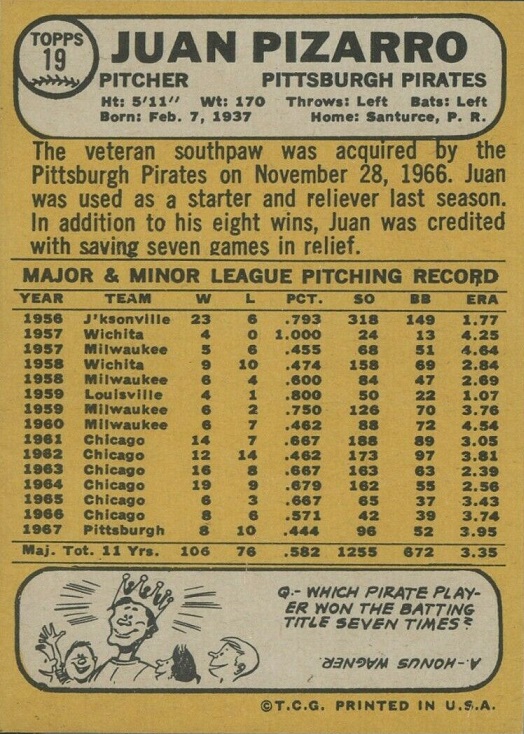 I hope everyone here gets that trivia question correct. I read the answer first, something that happens way too often. While the question isn’t wrong, it could have been asked in a better way. (spoiler alert if you didn’t look at it yet) Yes, Honus Wagner won seven batting titles with the Pirates, that is factual. However, it probably makes more sense to say he won eight batting titles with the Pirates, since that’s the total number that he won. It would sort of be like saying Roberto Clemente had 2,000 hits with the Pirates. Still true, just not the total he had at the end of his career.

One thing to really take note of here is the debut by Pizarro at 19 years old in 1956. He went 23-6, 1.77 in 274 innings, with 318 strikeouts. The second highest strikeout total in the league that season was 139! One other thing is that you see that he had a pretty good run with Chicago, but it doesn’t tell you which Chicago that is listed there. It was the White Sox, though he ended up playing four years with the Cubs between his stints with the Pirates.

If you’re interested in that card, I’d hate to tell most of you that the card shown above is probably out of your card budget. The asking price on the PSA 10 is $1,500…though it has a best offer option. Just one grade lower and probably indistinguishable with the naked eye, there’s a PSA 9 for $140. You can also get a great looking PSA 8 for $54, or a PSA 5 for $30. Or how about a PSA 8 for $30! Yup, someone has a PSA 8 that is actually 86 cents cheaper than the PSA 5. There are actually about 12 options (ungraded) for around $2 each delivered in case that PSA 10 is out of your range. There are also a handful of autographed versions in the $8-$20 range, plus one that is authenticated for $40.