Today’s Pittsburgh Pirates History article is loaded with sluggers. No other date in Pirates history for birthdays comes close in comparison. You have (in chronological order by their time with the Pirates): Glenn Wright, Dale Long, Smoky Burgess, Richie Zisk and Pedro Alvarez. Those are five players known for their bat. I’m going to apologize to Wright for that comment, because his 4.0 dWAR as a rookie in 1924 is the second best mark ever in team history. However, if you have a four-year stretch with a team where you average 104 RBIs and help that team to two World Series appearances, you’re probably not going to be remembered for your glove, unless you do something like turn an unassisted triple play (we get it, Glenn Wright was really good).

Anyway, of those five players mentioned above, three of them have appeared in this Card of the Day series multiple times. Dale Long has only been here once, but that was recently, so I’d like to avoid him for a little bit. That leaves Pedro Alvarez, who his making his Card of the Day debut today and you were here to witness it. Since this is his first appearance, I had all of his cards to choose from for this article. I decided to go to a throwback look once I saw his 2014 Topps Archives card, but I switched gears after seeing the 2013 version. A quick explanation is that the 2014 card used the 1986 Topps design, and I am sure I will feature that 1986 set here some time soon. The 2013 Archives front/back is modeled after the awful 1990 Topps set and I probably won’t be choosing to use that set any time soon. So here’s card #169 from the 2013 Topps Archives set, featuring Pirates third baseman Pedro Alvarez. 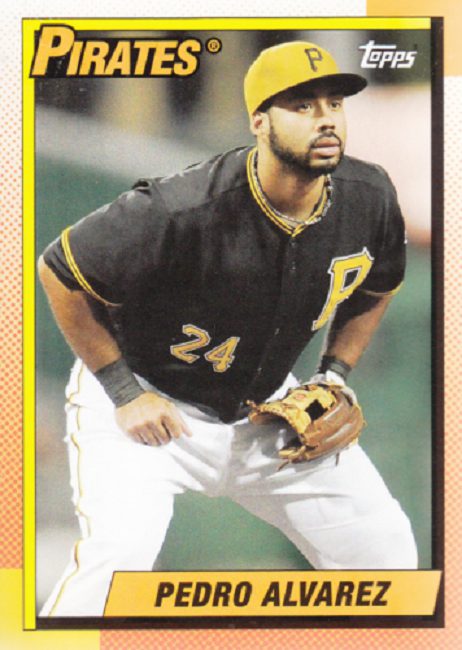 I lovingly refer to the 1990 Topps set as the Saved By the Bell set. It just reminds me of everything you see from the 90s out of the eyes of a teenager. There’s no way that Topps looks back on this set as one of their prouder moments, but they obviously pandered to the era and sold a TON of cards that year. That’s probably the biggest problem with the 1990 set. There are so many of them out there still and almost all of them are worthless. If everyone reading this article shredded an entire set of 1990 Topps cards, it would do zero for the value of the set. No one would miss them. That being said, I don’t hate it as much when it is used as a throwback design. That can basically be said about almost any set though. Heck, I even like the time used the 1977 set in a throwback set and that 1977 set makes me cringe every time I see it. This is a pretty good card of Alvarez. I think the gold cap really helps the eye appeal. Works well with the look of the card. 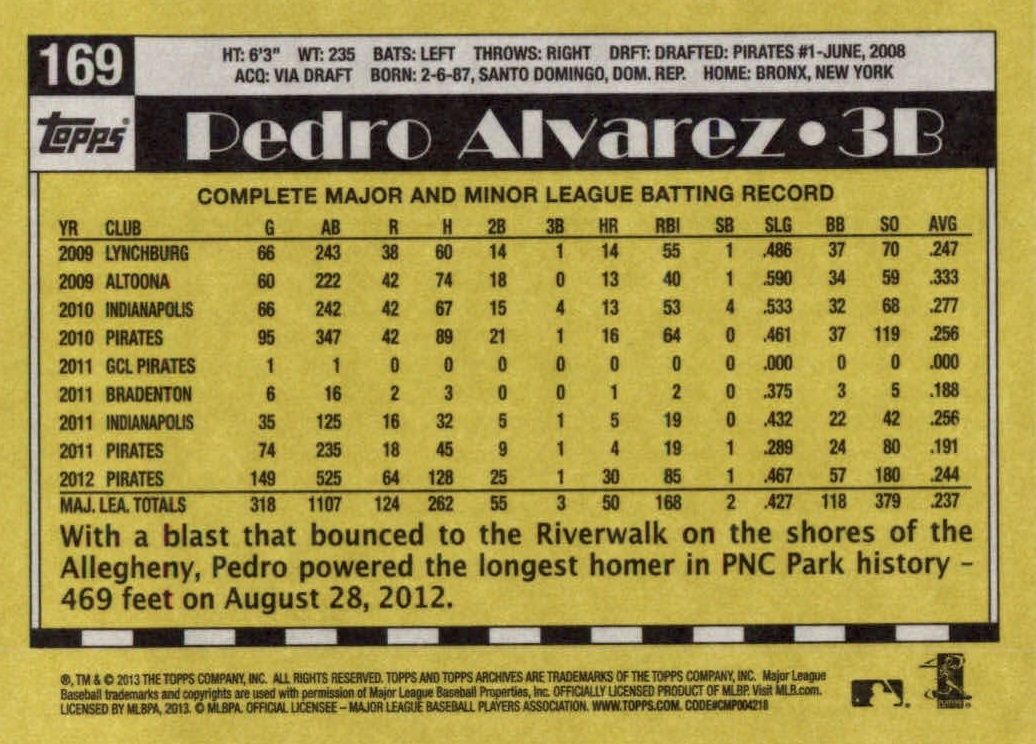 This back has the same look as the back of the 1990 Topps (that color is horrendous), except one key ingredient. Topps in 1990 had a thing called the “Monthly Scoreboard”, where they gave you the player stats by each month. It was a very strange idea because they only decided to use hits and RBIs as the stats for each month. A guy could have five hits in a month and you don’t know if he hit five homers and batted .100, or if he had a 5-for-5 game during his only game of the month. While it wasn’t the most useful idea, it would have been nice if the throwback set didn’t eliminate something that the 1990 set is known for including.

The 2013 season was Alvarez’s career year. He led the league with 36 homers, picked up 100 RBIs for the only time in his career, and he had his lone All-Star appearance and his only Silver Slugger award. That was also his only season in which his defense wasn’t below average.

There are 25 examples of this card on Ebay, but not all of them are the base card. You can also find limited versions that are listed as Gold and Orange Day-Glow, and both of those are a little more expensive than the normal base card, which can be had from multiple sellers for around $2 delivered.