Today’s Pittsburgh Pirates History article was led by Don Hoak, who would have been the Card of the Day subject today if he wasn’t already featured in this series twice. With that in mind, I decided to find the best player from the 1960 World Series champs who hasn’t been in this series yet. I was a bit surprised to find out that Bob Skinner was the person I ended up picking for today. How have I missed him up to this point? It appears that part of Skinner’s problem is that he shares the same birthday with Hall of Famer Fred Clarke, who got to Cooperstown as a player, but also managed the Pirates to four National League pennants and one World Series title. Featuring anyone except Clarke on his birthday wouldn’t make much sense. I still occasionally mix things up though, so Skinner has somehow avoided this series until today. Clearly this is your fault (yes, you!) for not pointing this out sooner, but I forgive you so we can move on to our look at card #113 from the 1960 Topps set, featuring Pirates outfielder Bob Skinner. 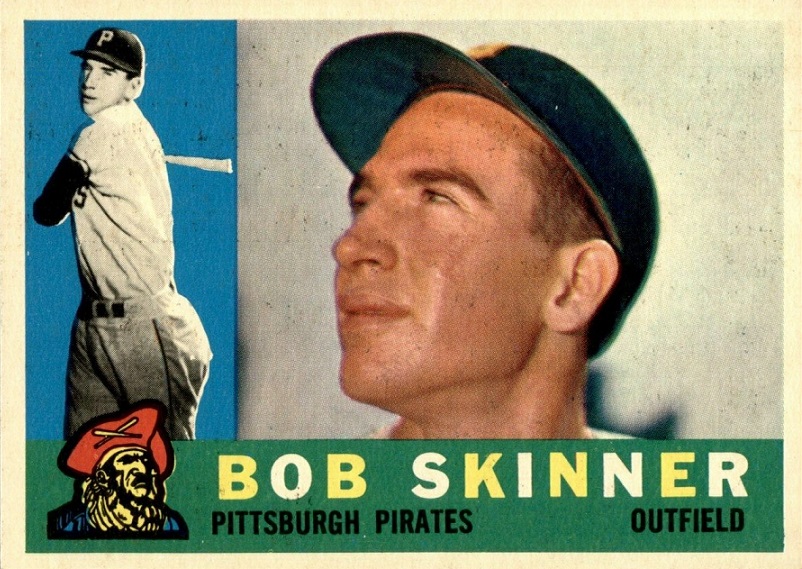 The 1960 Topps set is somewhat similar to the great 1955-56 offerings from Topps, but not quite as good. The horizontal layout, plus the two photos of each player, reminds you of the earlier sets, but the 1960 set has different backgrounds for each photo. This Skinner photo has a Brady Bunch feel to it, where it’s a head shot and he’s part of the tic tac toe board, looking up at a picture with a blue background. I just ruined this card for you, didn’t I? 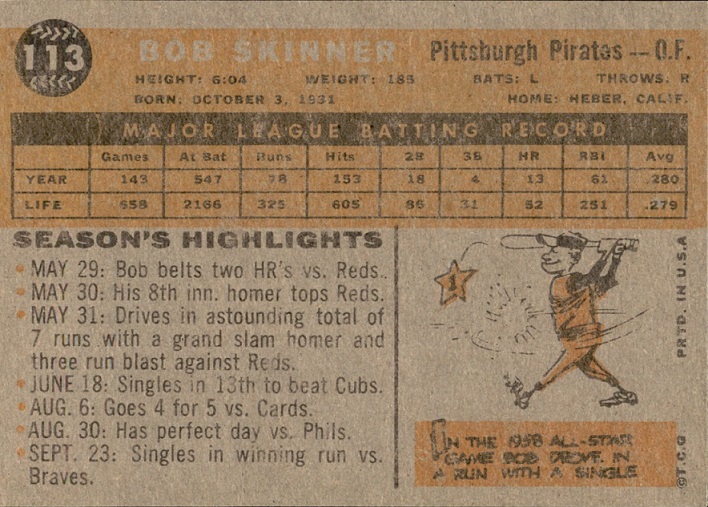 The back here is a little faded, which is odd because I pulled this scan from an auction listed as Near Mint condition. I like the set up here. I’m not a big fan of the one year of stats, but that was common back then, so I don’t subtract any points for that on 1960 cards. The season highlight section is a nice touch, where they quickly hit the best games from his season. You piqued my interest Topps with that “perfect day” on August 30th with no details. A quick check of Baseball-Reference shows that he didn’t have a perfect day, but he did have a perfect game of sorts. Skinner went 4-for-4 with a walk in a 2-1 win. That problem is that the Pirates played two games that day (it’s what I like to call a “doubleheader”) and he went 2-for-4 in the other game. Off to the right you have a cartoon with generic gray Topps man, where he steps in for Skinner to reenact his RBI single during the 1958 All-Star game.

If you’ve been waiting for me to feature Bob Skinner here before you bought one of his cards, then wait no longer. This card trades well on Ebay, so there are always plenty of current auctions and you have your pick of condition, depending on your type of collection. The highest priced one is $98 for a PSA 8, but don’t run out and grab that just yet. The second highest priced one is also a PSA 8 and that price tag is $58, plus it has a best offer option. There’s a signed copy for $30, which also has a best offer option, but there are cheaper ones that are autographed, with two others going for $20 and $23, and both of those have best offer options. There are also three lower grade signed copies, so you really have a nice selection of choices here as well. You can get the regular unsigned card as cheap as $3 delivered, with about five options that are under $4. Ideally, you want to pay around $10 for one in mid-grade condition, but you might be able to find one cheaper.