Today’s Card of the Day features Pittsburgh Pirates pitcher Joe Coleman, who finished up his career with the 1979 Pirates, helping them to their fifth World Series title. He played a minor part on that team, mostly doing mop-up work over the last 2+ months of the season. Coleman had a long career in the majors, but he started at 18 years old, so when he pitched his final big league game on September 24, 1979, he was just 32 years old at the time. He’s part of one of just five families with three generations in the majors, and the only one that includes just pitchers. Coleman had one card during his time with the Pirates, appearing in the 1980 Topps set, but there’s something a little off about this card, as you will see below. Here’s a look at card #542 from the 1980 Topps set, featuring Joe Coleman. 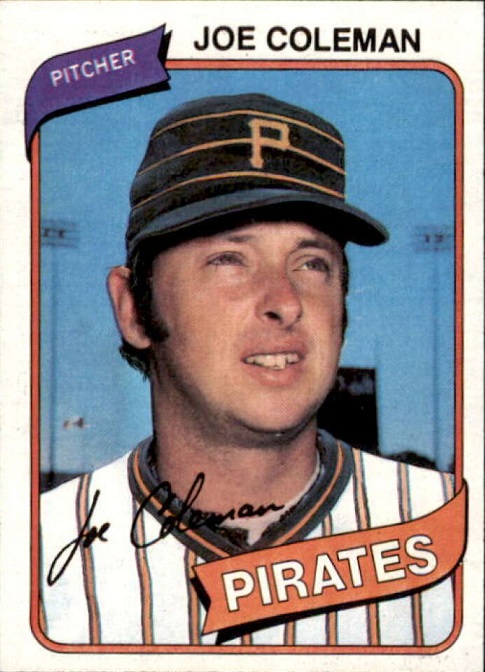 Sure enough, there’s Joe Coleman pictured in the pinstripe jersey from the mix-and-match era…or is it? Look a little closer. That picture does not show Coleman while he was with the Pirates. While I prevented by my date of birth from buying 1980 Topps cards new, I have owned a 1980 Topps Joe Coleman card since I was about six or seven, and I guess I never really looked at it closely, because that is some awful artwork to put him into a Pirates uniform for the card. Topps had some poor kid trying to draw pinstripes, a collar and a hat onto a photo of Coleman that they took before he joined the Pirates. Why not just go with one of the solid color jerseys from that year instead? This came out slightly better than I could do on my best day, which is far from a compliment. That’s rough for Coleman, since this ended up being his final card. One thing of note is that he did play minor league ball for three years after his final big league game, so he did end up with more cards, they just weren’t from a mainstream set. 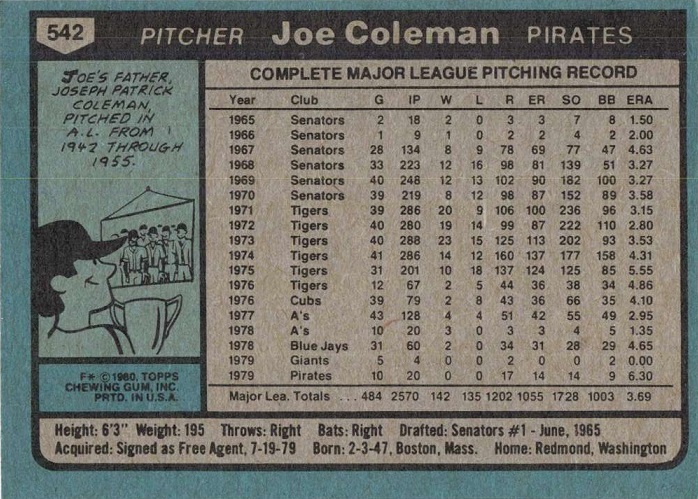 One thing I really like about this card is that you get his entire big league career on the back. That makes it a bit difficult to read in hand, as they have 18 lines of stats, plus his career total. You can look at that tiny writing and see that Coleman had a really good run in the middle there with the Detroit Tigers, on his way to 142 games wins and over 2,500 innings pitched. The comic on the side mentions his father (also named Joe) playing in the majors. It appears to say that he played 14 seasons, but he actually played ten years in the majors, while giving up three seasons during WWII to serve our country. The third piece of the three-generation family is Casey Coleman, who most here could/might remember. He pitched for the 2010-12 Chicago Cubs, and the 2014 Kansas City Royals. I noted that there have been five families with three generations and the Pirates are also involved in two of the others. Gus Bell was an outfielder for the Pirates in the early 50s and he was the first of his three generations, while Dick Schofield was an infielder for the Pirates for eight years, and he too was the first of the three generations. The Hairstons and the Boones are the other families.

One other thing of note here is that the bottom tells you that he was a first round draft pick during the first ever MLB draft. Kudos to the Washington Senators scout who pushed for him to be taken third overall, which turned out to be a great pick. Granted, they missed Johnny Bench, but so did every other team in the first round, including the Cincinnati Reds, who still got a pretty good player in Bernie Carbo anyway. Coleman has the second best career WAR for any of the top 35 picks, trailing only Rick Monday, the first overall pick.

If you’re interested in this Topps artwork card of Joe Coleman, you’ll be ecstatic to know that it can be had cheaply on Ebay. There’s a really interesting option if you want the best of the best. A PSA 10 is currently up for sale with a $53.99 price tag that has a best offer option. There’s a signed copy for $10 delivered, which also has a best offer option. Coleman turns 75 years old today, so his signatures aren’t rare, but he’s still a member of the 1979 Pirates, so that could be desirable. If you just want a nice looking copy, you have plenty of options for around $2-$3 delivered.