Today’s Card of the Day is the first for a player who became a fan favorite for many during his time with the Pittsburgh Pirates and this card highlights one of the biggest reasons fans enjoyed his play. Travis Snider was by no means a great player during his time in Pittsburgh, but he was around during all three seasons of the three-year playoff run from 2013 through 2015, so that helped his case. He played 319 games over four seasons with the Pirates and he compiled 1.3 WAR during that time. Ask any fan of the team from that time-frame what they liked most about Snider and you will get a range of answers, but they all remember one moment in particular that really stood out. The 2013 Topps Gypsy Queen set had a subset included called Glove Stories, where they told a story about a particular play, which was highlighted on the front of the card. The Travis Snider card was born on September 27, 2012… 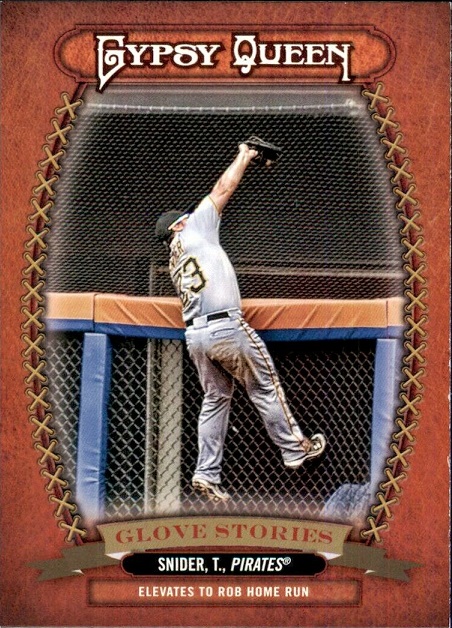 There you see the photo snapped just as he is making the catch, but the cropping of the photo here doesn’t really give you the full effect of what you are seeing on the card. There might be 1-2 people reading this article right now who are looking at that photo right now and thinking that they have no idea what play is being show. With that in mind, sit back and enjoy this video, which has all four tv/radio calls for the Pirates and New York Mets for this catch.

I actually watched this whole video twice, then started watching it a third time before stopping and continuing with the article. You just don’t see a player that far over the fence when they make it a catch. Yes you can find a few other examples, but think of how many games we are talking about to get these handful of catches. I think the image used on the card is perfect for this catch, although on the video I love the side view from center field where you really see how far he was reaching into home run territory to make that catch. 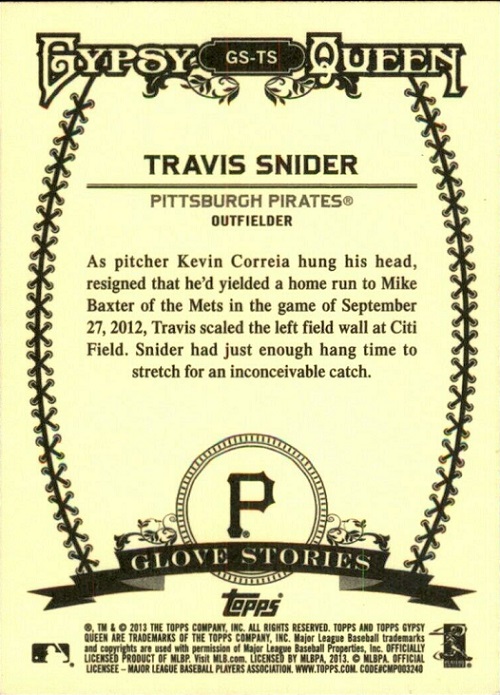 I purposely left out one great detail from the video because the back starts with it. When Kevin Correia gave up that very long out (longer than any other out hit in that spot), he clearly thought the ball was gone. The other great (depending on which side you’re on) detail is that Mike Baxter (the batter) hit his third home run of the season one week earlier…then never homered in the majors again. He finished out the 2012 season, played semi-regularly in 2013, and saw big league time in 2014 and 2015 and he failed to hit another home run. Snider not only robbed him, he took away what should have been a memorable moment when he looked back on his career.

If you’re interested in this card because of the memory it brings back to you, then you’ll be happy to know that it was a cheap insert in the set. I’m a big fan of the original Gypsy Queen cards from the 19th century, but I never got into the newer versions, but this is a nice looking card. There are currently 13 auctions for this card on Ebay and a few of those options are right around $2 delivered. The most expensive one is just over $5, but almost all of that cost in shipping, so just be sure to check that before making your purchase.