With no explanation, Donruss decided to rename a pitcher on the Pittsburgh Pirates and then not fix it. In what could have been a collectible error for years to come, Pirates pitcher Cecilio Guante was called Matt Guante on the front of his 1983 Donruss card. No one knows where the name Matt came from, it wasn’t close to his first name or his middle name, and I could find no mention of it ever in a newspaper as a nickname. Mistakes happen on cards, so it’s not a huge surprise that Donruss got a first name wrong. The surprise comes in with the fact that they never fixed it in 1983. They just waited until his new card came out in 1984 to say “Oh by the way, his name is actually Cecilio”. Here’s a look at card #423 from the 1983 Donruss set featuring Matt Guante…sort of. 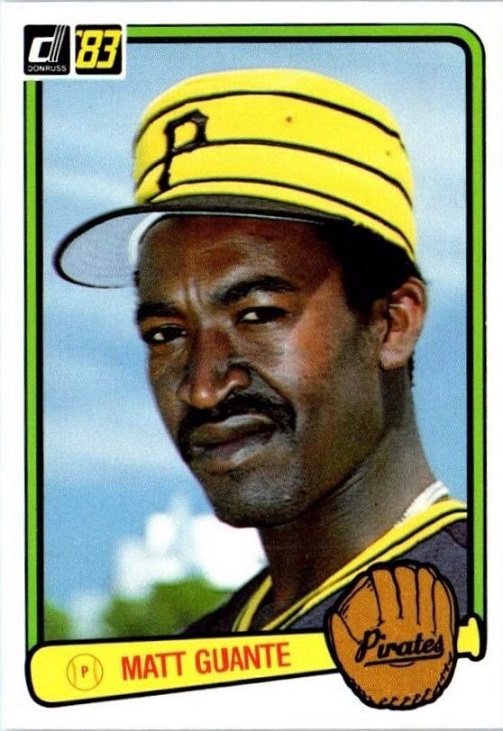 There it is at the bottom in the baseball bat, Matt Guante, pitcher for the Pirates. I mentioned this last time I looked at the 1983 Donruss set, but it is worth repeating. This is one of the most boring sets because they did almost nothing different from their 1982 set, which wasn’t a great design either. When Topps used the same general idea from 1955 to 1956, they were taking a great looking set and improving on it. When Donruss did it in 1983, they were taking something that was mediocre and making sure you still thought it was mediocre a year later. As a side note, a really need to get one of those pillbox caps with the colors reversed. 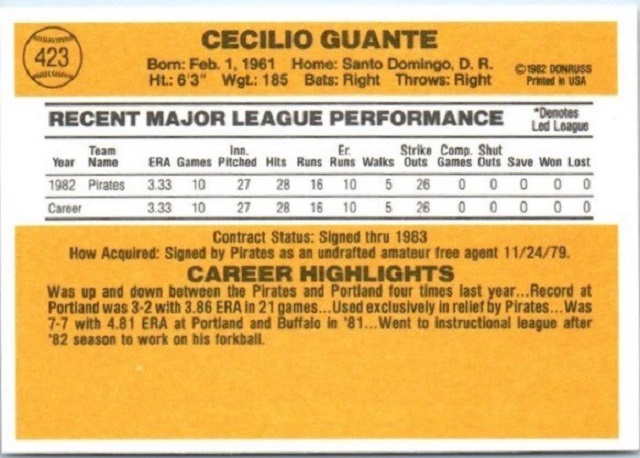 The back of the card has Cecilio Guante written at the top, which is a nice touch. You would have thought someone in quality control would have caught that error once the card front and back were put together. If they did that though, then we probably wouldn’t be talking about a 1983 Donruss card of Cecilio Guante today. I’d probably be featuring him still, but I highly doubt that I would pick the 1983 Donruss set. This was the first year of their orange/yellow backgrounds, as Donruss was also unoriginal on the back of cards during this time. This color appears in 1985, 1987 and 1989, as they saved the color blue for the even numbered years. Did anyone call them out on this in the 1980s?

One final note here. I like that fun fact at the bottom, which I have definitely read before, but I did not remember. You don’t see too many big league guys in the instructional league. So Guante going there to work on a forkball is a nice bit of trivia/info.

This card is an error, but as far as price goes, that error has no effect. I guess that’s good for anyone who wants one. The basic laws of Ebay economics work here. You can get a copy for $2 delivered, with plenty of options close to that price. There are four autographed copies for sale (check and compare each to authenticated signatures) that range in price from $10 to $33, with either blue or black ink options. He has a nice autograph, so one of those might interest you.