If I didn’t make some exceptions once in a while, then there would be players who never appear in our Card of the Day series. Once of those exceptions deserves to be made, otherwise a great brand of cards would never appear in this series. The Zee-Nut brand of baseball cards were printed from 1911 through 1938. They only featured players from the Pacific Coast League. There is a long list of players for the Pirates who appear in that set and not in any set that has them on the Pittsburgh Pirates. Last July 1st, I wanted to include a card of pitcher Elmer Ponder, so I went to the Zee-Nut set for the first time, where I had five options for him. This is our first look at a Zee-Nut card since then. Among the players born on January 31st is pitcher Jimmy Zinn, who played for the 1920-22 Pirates, though the 1921 season was his only full year with the team. He played six years in the Pacific Coast League (1930-35) with the San Francisco Seals, so we had some Zee-Nut options for him. 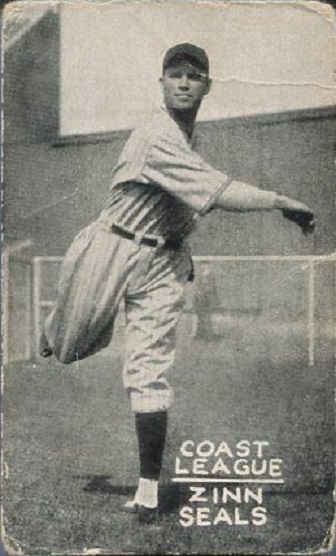 The photo here shows Zinn in a pose typical of Zee-Nut cards. Their sets are filled with pictures of pitchers warming up before games and batters on the sides in follow-through swing poses. The one thing I like about this pose is the guy in the suit beyond the fence. Just adds a little intrigue to the photo.

The cards aren’t that fancy, all business with no borders, black & white photos, and very little about the player. Everything there is abbreviated you could say. They left off “Pacific” for the league, no first name for Zinn, and they could have added San Francisco to the team name instead of just going with Seals. Also no mention of who put out the cards, at least for this year, but they included that on the front in past years (check the Elmer Ponder card linked above). These cards used to come with coupons on the bottom that were meant to be torn off and used, so it’s much easier now to find the cards without the coupon (see price section below). There was a list that dealers who sold Zee-Nut products had with premiums that people could get with the coupons.

Zinn might be of particular interest to collectors because he won over 300 games in pro ball. Sure, very few of those wins came in the majors, but it’s not like it’s easy to win 300 games at any level. The Pacific Coast League used to have a lot of really good players because star players there could make good money and stay close to home. So it was considered to be a very strong league, even more so than just your average Double-A league (highest minor league level at the time). So he wasn’t padding his stats versus inferior competition.

This particular scan was from a large lot of Zee-Nut cards from 2015 that was featured in Brockelman Auctions, so it isn’t currently for sale. If you’re going to drive over to Ebay to search for one of these cards, I’d recommend searching by both “Zee-Nut” and “Zeenut” as both versions have become acceptable by most collectors and the majority seem to list it without the hyphen. You don’t want to limit your options over spelling differences though. There is a low grade 1931 card up on Ebay for just over $20 delivered. That card has been well loved. There are two of his 1933-36 cards up for $80 and $90, and the cheaper one is slightly nicer. The photo isn’t much different looking than the 1931 version too. Those are your only options currently available. The cards are rare, but not extremely rare like some cards from the early years of collecting. However, if you can find one with the coupon on the bottom still, then the price will jump. A Zinn with a coupon in low grade recently sold for $175.