Today’s Card of the Day comes from the 1981 Topps set, one of my favorite sets over the years that gets extra credit for what they did for the Pittsburgh Pirates cards. Today’s player choice is turning 75 years old today and he has one of the more interesting careers. Matt Alexander was a member of the 1978-81 Pirates, including 44 games for the 1979 World Series champs. He had just two cards during that time, appearing in both the 1981 and 1982 Topps sets. Both Donruss and Fleer overlooked him during their first two full sets of cards. I went with the 1981 Topps cards today simply because it has been longer since we looked at this set. So here’s card #68 from the 1981 set, featuring Matt Alexander. 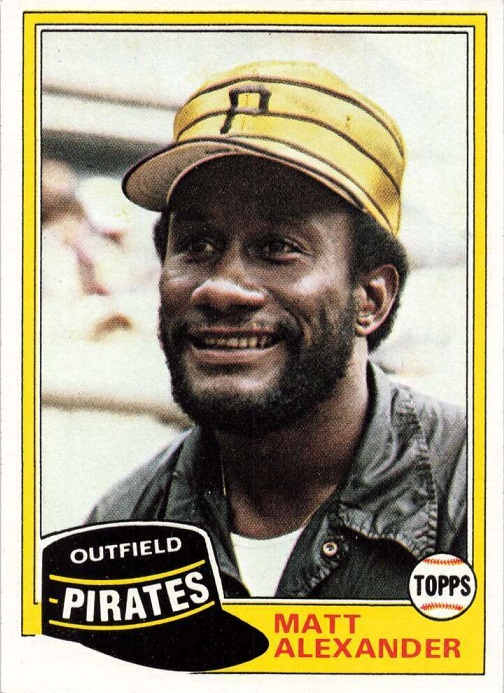 In parts of four seasons with the Pirates, Alexander had 27 plate appearances with the Pirates. That might sound like he was barely with the team those years, maybe three September recalls and then he got released early in his final year. While I don’t know the exact service days during that time, he basically played just over two full years in the majors during that four-year stretch. He was a September addition in 1978, spent a month in the minors in 1979 and 1980, then spent two months in the majors during the strike-shortened 1981 season. All of that time, yet he batted just 27 times. Alexander was a pinch-runner most of the time, who played two entire games during his time in Pittsburgh, going 3-for-5 as the lead-off hitter on June 17, 1979 and 2-for-5 at the lead-off spot on August 26, 1979. In fact, that second game was a blowout and he didn’t even stay at the same position for the entire game, moving from center field to right field when Dave Parker left early and Omar Moreno entered. Alexander played just 18 full games during his nine seasons in the majors, with a majority of those games coming during the final two weeks of May in 1974 with the Chicago Cubs.

Here’s what to like here on this card. First, the hat that he’s wearing isn’t the normal black with gold stripes pillbox cap that we are used to seeing. It has the reverse colors, but it still looks great in my opinion. That’s important to note on this card specifically because the Pirates players all have pillbox caps in the bottom left where you see “outfield” and “Pirates” listed. Someone at Topps was genius enough to give the Pirates those hats and every other team in the set has the regular looking rounded hat in that spot. That right there is what I consider to be one of Topps coolest features ever. Then the use of the team color in the border around the photo is also a great idea. The Pirates cards in this set all look great because of the front design. 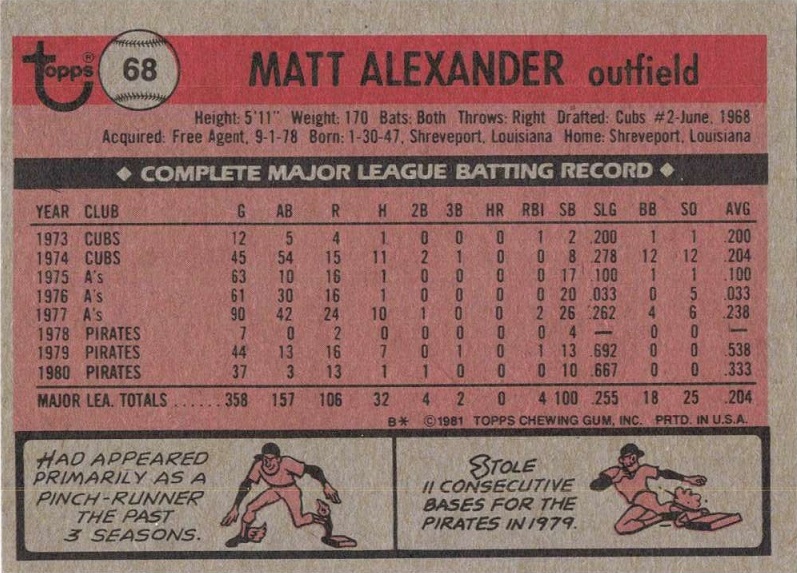 The back gives you Alexander’s career stats and you really get the sense of how much use he got off of the bench. The guy had 100 steals at this time and a combined total of 50 hits and walks. The 1981 season ended up being his last and he finished with 26 strikeouts in 374 career games. Both of the cartoons at the bottom talk about base running, because that’s basically all there is to talk about with him. He finished with one RBI with the Pirates in four seasons. That came on May 2, 1979 when he drove in Tim Foli with an eighth inning triple that gave the Pirates a 10-2 lead.

This card is a common from the 1981 set and the Ebay laws of common cards apply here. You can get it for about $2 delivered. There is a PSA 8 for sale for $39.95, but then the next highest priced auction is about 20 cents less for a PSA 9. There are two autographed versions and the cheaper one looks much better because the signature is to the left of his face, while the other one is in red and goes across his neck/jacket. The cheaper one is just $4.24 delivered, but check it against other examples to make sure it is real first. He isn’t someone who is a hard to find signature so a forgery for an added $1 or $2 isn’t likely, but it’s better to do a little research and be safe. It’s also a good habit to check any autographs that don’t come authenticated.