Today’s Card of the Day comes from the only former Pittsburgh Pirates player who was born on January 29th. The average day should have five birthdays based on the amount of days and the amount of former Pirates players. I know there are a handful of days with 10+ birthdays, so I guess there had to be a day in there somewhere with just one player. February 29th has 15 Major League players, but no former Pirates, just in case you were wondering if a day existed with none. Maybe the Pirates will get Jose Abreu one day and then we can add him to our January 29th history post once he becomes a former player. For now, we look at our first Jason Schmidt card in this series.

I had all of Schmidt’s Pirates cards to choose from…sort of. I couldn’t find a back scan for either of my first two choices, so this was actually my third choice. That’s too bad because I already had the article written out in my head as soon as I saw my first choice. I saved the search though, so hopefully I’ll get a back scan and get to it at a later date. It worked out fine though because once I decided to go with the third choice, I realized that this is our first look at the 2000 Topps set. 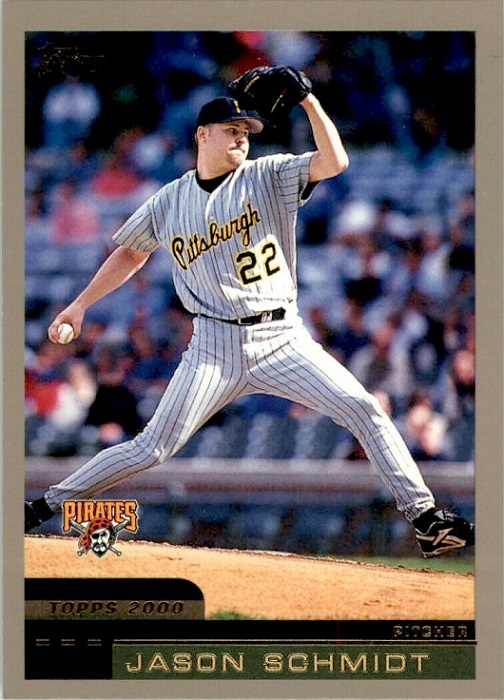 I don’t know if it’s just the scans I found(don’t have a 2000 Topps card handy) or this is a good representation, but man there are some hard to read things on this card. There’s a Topps symbol in the top left of this card. You’ll have to trust me on that I guess. It also says “pitcher” above his name, all the way to the right in that black bar. You already know that I like the usage of the Pirates logo on the front. I like the border color, which goes well with the Pirates uniform, even though I’m not a fan of the pinstripes.

Topps did something pretty odd with the Pirates cards. They all have a drab look to them at the bottom with the name/position EXCEPT Jason Kendall is over here with the bright yellow look that feels like all of the Pirates should have used that color. 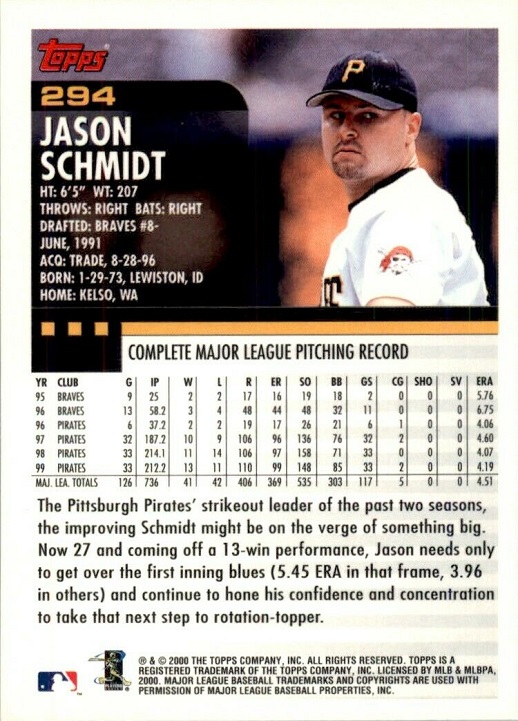 I really like the look of the back here. The black writing on a white background is a pleasure for the eyes to read. The bio section predicted Schmidt becoming something big in the future, it’s just too bad that it didn’t happen with the Pirates. His immediate future at the time of this card was a season limited to 11 starts due to shoulder surgery, followed by a trade to the San Francisco Giants during the following season. The Giants were only trading for two months of Schmidt before free agency, but they were smart enough to re-sign him and they got outstanding production, including a second place finish in the Cy Young race in 2003.

I like the look at the top of this card, just everything about it. The added second picture is great. Schmidt looks a little more intimidating here. A second Pirates logo would have been nice (not necessary) but the photo here actually got the Pirates logo, so that’s enough for me. The use of Pirates colors on the back as well really tops it off. I even like the red Topps logo. Well done, Topps. You hit a grand slam this year.

As you might expect, this is a common card that you can get for about $2 delivered, but there are some variations to chase. There’s a chrome version, a chrome refractor, a home team advantage and a limited edition, which are all available on Ebay for under $8 delivered. Needless to say, all of those are tougher to find than the base card. Someone has the Pirates team set of 13 cards and it’s going for $7.25 delivered.