Today’s Card of the Day comes from the 1954 Bowman set and it features Carlos Bernier, outfielder for the 1953 Pittsburgh Pirates. He was the first player from Puerto Rico to play for the Pirates. This is the third time that we have posted about this set, but it’s the first since June, and the first card for Bernier. He won’t be a regular here in this series, but I hope to get to his 1954 Topps card at some point. Maybe for his next birthday. For now, let’s check out the 1954 Bowman card. 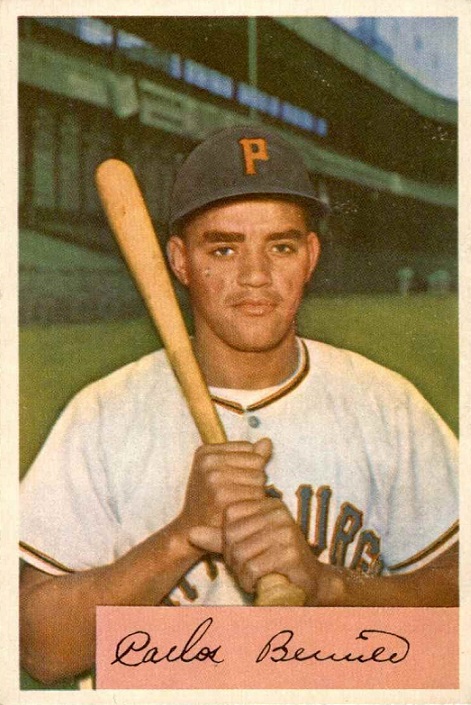 This is a nice looking set, though I’m never a fan of pink on the front of cards. That was just random for Bernier, as the other Pirates cards in the set can be found with green, yellow, blue, light purple and orange boxes on front for the name. An interesting thing with this card is that the card of Pirates catcher Vic Janowicz looks almost exactly the same, especially in the small thumbnail photos on Ebay. He has the same bat over shoulder pose and the same background.

I like the use of facsimile autographs on front for the name. That’s something that you couldn’t do now with the awful scribble jobs that 90% of current players try to pass off as autographs. Back then people had autographs you could read. Actually, you don’t have to sound like your grandfather to find decent autographs, it wasn’t that long ago. 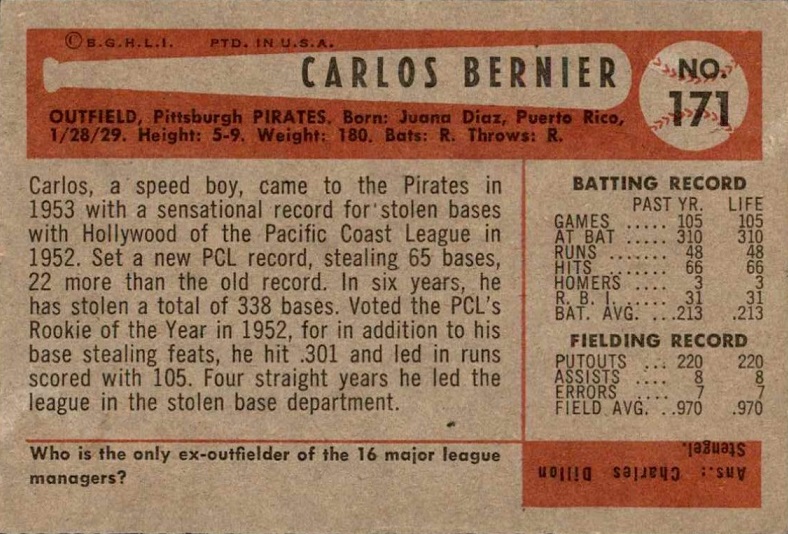 Bernier had an impressive resume in the minors, at least in the stolen base department. While it’s not mentioned on the card, he is credited with 89 steals during the 1949 season for Bristol of the Colonial League. That stolen base stat/fact for the Pacific Coast League seems highly unlikely to be true. They used to play 200+ game schedules, so you would think that someone had more than 43 steals in the league that was around since 1903 (it was also considered to be a minor league in two previous years). Unfortunately stolen base totals aren’t available online for most years of the league, but you only had to go back to 1945 to find someone who had more than 43 steals in a season, so the stat was obviously wrong. I went back to 1940 before stopping and found two other players with more than 43 steals.

This set only had one year of season stats, followed by career stats. For Bernier, you’re looking at his entire big league career. He played 105 games for the 1953 Pirates, then never played in the majors again. That speed didn’t exactly convert over to the majors. He had 15 steals, which is a decent total, until you realize that he was caught stealing 14 times, which led the league.

I like the design for the name and card number here, with the bat and baseball. Looks simplistic now, but it was a nice touch for the time. The trivia question at the bottom involves a former Pirates player, who went on to make the Hall of Fame.

There are currently 27 auctions for this card up on Ebay, ranging from a low-grade copy for $4 delivered, all the way up to $720 (with a best offer option) for a PSA 9. That price is a bit extreme because you can get a PSA 9 from a different seller for $278 delivered. There is one autographed copy going for $455 delivered (with a best offer option). He was not a frequent signer and he passed away 33 years ago, so his autograph is a tough one. If you just want a nice mid-grade copy, you can get it for about $20. There are two PSA 6 available for just under $25 each.